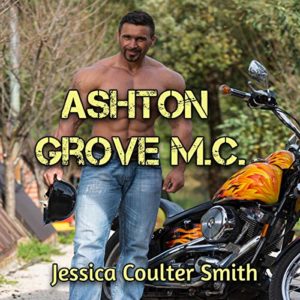 A motorcycle club has rolled into Ashton Grove, trying to make a place for themselves. For a motley crew of shifters, fucking and fighting are just a way of life. But if there’s one thing they can’t stand, it’s anyone who abuses a woman.

Viper: When Viper sits down to a game of poker with the Red Devils MC, and their sergeant at arms tosses a woman in as his bet, Viper knows he has to win at all costs.

Axel: Axel Bloodmoon loves his life in the MC. Danger abounds and there’s lots of willing women to be had. But when he goes on a mission to rescue some abducted women, things don’t turn out quite as he’d planned. One sniff of Amelia and his cat is convinced she belongs to them. Stubborn beast!

Ghost: When Ghost realizes Shelly is being forced to sell her body, and that her pimp is a little too free with his fists, he realizes he can’t sit back and wait any longer. Charging in on his Harley, he swoops in, and rescues the damsel in distress. There’s only one problem. Who\’s going to rescue him from her?

Crimson: When Crimson nearly loses Holly, he realizes that he will do anything to keep her by his side – and when a bear gets an idea in his head, he’ll stop at nothing to make it happen. What’s a love-struck shifter to do when his mate has cold feet?

Visit Jessica on the web: http://www.jessicacoultersmith.com