A Wolf in Duke’s Clothing by Susanna Allen 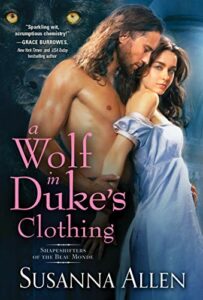 A Duke in want of a wife…

Alfred Blakesley, Duke of Lowell, has long been an enigma. No one dares to give a man of his status the cut direct, but there’s simply something not quite right about him. What would the society ladies say if they learned the truth—that the Duke of Lowell is a wolf shifter and the leader of a pack facing extinction if he doesn’t find his true love? So now he’s on the hunt…for a wife.

Felicity Templeton has a goal of her own: to remain unwed until her twenty-fifth birthday, when she will inherit a significant fortune. But that all changes when she meets Alfred, the dashing duke who’s determined to have her for his very own…

Born in New Jersey, Susanna Allen moved to Ireland for twelve months — in 1998. Susan is living her life by the three Rs: reading, writing, and horseback riding, and can generally be found on her sofa with her e-reader; gazing out a window and thinking about made-up people; or cantering around in circles. She loves every minute of it!

Following her first meal in Lowell Hall, Felicity and the duke retire to the drawing room for tea. Felicity refuses to marry the duke as they know nothing of one another; he calls her bluff and proceeds to inquire after her interests…

“I sketch,” she allowed. “I am fond of drawing animals.”

“Animals?” He pretended to scoff. “A lowly subject.”

“I disagree. I find there is nothing nobler than the beasts of the field, the birds of the air. I admire their freedom to be themselves, despite many species having been domesticated by humans. I commend the way they take care of one another in their groups or herds.” She peeped at him, hesitant. “I speak of horses, in the main.”

“There is little that is natural regarding man’s treatment of the horse.”

“I do not disagree. Man owes civilization to horses and often repays them with mistreatment. I believe we can show true gratitude to the horse with conscientious husbandry. I believe our diligence in this matter will make the whole world a better place.”

“A bleeding heart.” He was baiting her, of course, and her defense of creatures both great and small thrilled him to the core.

“A beating heart, a heart that acknowledges the dignity of all sentient beings.” Her hazel eyes glowed like topaz with her passion.

“Had they any will of their own, they would not allow themselves to become subjugated by us.”

“I do not deny that there are many who would seek to subjugate so-called inferior creatures,” Felicity allowed, “but those who are sensitive will garner only the best from the animals in their care. If only we would learn from them.”

“Better a radical than one who stands by and does nothing. Better a bleeding heart than one that has turned to stone.” Miss Templeton scowled at him. “I know your kind, looking down on all around you, full of your position in life that was nothing more than an accident of breeding. Little separates you from the animals, Your Grace.”

“Oh, very little indeed,” he agreed, struggling to keep his composure. “But come, such a fuss over mere animals.”

He went to meet her fury. “For why would we, who have speech and independence, care for beasts of burden or common house pets?”

“If it is speech that elevates us, only recall the numberless times that words have caused ill. Only think what is being said about me at this precise moment and tell me that language is something to be proud of.” Miss Templeton forgot herself so far as to fist her hands on her hips. “And as for free will? Those such as you, Your Grace,” she spat, imbuing a world of spite in his title, “those in the upper echelons of society may consider free will their birthright, but the majority do not have that luxury. Why must one species be found superior to the other? Why can we not live in harmony? Why must our own baser instincts cause our animals to be abused? How simple it would be to change our behavior, to make a difference.”

“It is all well and good my dear, but one woman? Make a difference? In the larger world?” By the Goddess, whatever she wanted, he would ensure she achieved it.

“Yes, one woman. One woman, who has the knowledge and the will. Knowledge and will are not the sole provinces of men.”

“And what do you speak of, then?” he challenged. “Training house cats? Bringing dogs indoors?”

“Well,” she hesitated. “Just for the sake of argument, mind. Horse breeding.”

“A pursuit that has resulted in inbred mounts that, more often than not, do not live up to expectation and must be destroyed. Or result in unreliable beasts that end up hurting their riders or themselves.” Miss Templeton stood near enough to him to bite him on the chin. “All it would take is the cross of stock in such a way that would guarantee the best of both will out.”

“But madam, how then would our equine friends acquire their mates?” Alfred inquired. “Do the studs apply to the fathers of the mares for the hands, or rather the hooves, of their intended?” He snuck a breath, inhaling her dudgeon, her ardency, her ferocity, and his wolf was like to howling at the full moon.

“Do not be ridiculous.”

“Or do they see, and scent, and take?” He leaned in, all but whispering in her ear. “Do they follow instincts unknown to anyone but the stallion and mare involved? Is it the stallion’s pursuit that inspires the mare or the mare’s willingness to be covered that inflames the stallion?”

“You seek to discompose me.” She blushed but held his gaze. “You are mocking my beliefs. You are mocking me.” She turned to leave, and he stopped her with a hand on the slice of bare arm below her puffed sleeve and above her glove. “You mock me by keeping me here, as if the whole world would believe that you wanted me above all others. I will find a way to leave here and put this sham behind me.”

He gripped her arm. “You will not leave me.” The dominatum rushed through him and once again had no effect on her whatsoever. “We will marry, and not only because it is what society will demand.”

“You may force me to the altar.” Miss Templeton stuck out her chin in defiance. “But you cannot make me respond to the vows.”

“What might you respond to?” He leaned in and ran his nose down her cheek, around her jaw. “This?” She shivered. “Ah, I do know something about you, after all—that a stroke on the cheek makes you tremble.” He breathed in her scent and breathed out, gently, against her neck. “I was merely playing devil’s advocate,” he crooned as he let his lips touch her earlobe. “It was not my intention to mock you. I find your passion quite…stimulating.” He felt her quiver, said, “Do pardon me,” and kissed her.