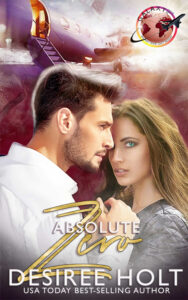 Book 4 in the Galaxy series

Fourteen days until Sierra Hunt’s brother is sentenced to life in prison for a crime he didn’t commit and the cover-up is so outrageous it’s almost unbelievable. Sierra had no way of knowing that the man with whom she had an explosive one-night stand would hold the answer to her desperate need.

Vic ‘Eagle’ Bodine wanted more than the unexpected one night with the woman who rocked his world. He was shocked when she turned out to be Galaxy’s newest client, and that they’d be joined at the hip as they worked to save her brother from an unjust imprisonment.

Galaxy will need to live up to its motto of We are your last resort for this one, the mother of all cover-ups. But Eagle is going to make damned sure that he gets it done…and at the same time convince Sierra that they belong together.

Reader advisory: This book contains scenes of violence, and mentions of off-page murder and murder.

If someone had explained to Sierra Hunt what absolute zero was, she would have told them that it was exactly where she was. At a total standstill. And her pounding head wasn’t helping the situation. She pried her eyes open and looked around. Where was she, anyway? Her hotel room? No, not hers, but one like it. Then whose? She scrunched her forehead trying to remember exactly where she was and how she’d gotten here. Was this a repeat of Jeremy’s situation?

Jeremy. Her brother. Then it all came rushing back at her.

The trip. The last chance. Then the disappointment and depression. The depressing phone call to her brother. The man in the lobby.

They had spent a fortune on attorney fees trying to arrange an appeal, but all for nothing. Every attempt after the first one had been denied and now every option that they’d had was exhausted. Every attorney she had consulted—if quick brushoffs could be called consulting—explained they had no additional grounds. The three other attorneys she’d tried previously had all told her they saw nothing to indicate there were grounds for yet another appeal. And the governor’s office would not take her call.

Jeremy was already showing the physical effects of being in prison, and she’d begun to fear for his mental health as well.

Cheryl Andrews, Jeremy’s wonderful girlfriend, somehow continued to believe in him but then she’d became ill with a bad case of the flu and had died in days. Jeremy still had not recovered from the loss.

Sierra had flown here to New Orleans to meet with a high-profile attorney who she’d been told was a champion of difficult cases like this. He was her last chance, the man she was told who could find a loophole. He’d refused to make an appointment, but she figured if she just showed up, he’d at least have to give her fifteen minutes. She’d waited all day in his office, only to have him tell her she should accept the fact her brother was guilty and prepare herself for the fact he would die in prison. She left his office depressed and discouraged. She had one option left, but she couldn’t exercise it until the morning, damn it.

On top of that, for the past few weeks she’d had the uncomfortable feeling someone was watching her. Following her. She’d been doing weird things to see if that was true, but if it was, whoever was on her tail was very good at it.

Exhausted, she’d been paying no attention to anything as she made her way through the hotel lobby. Hot tea, she told herself. That was what she needed to soothe her nerves. The drinks wagon was still open in the lobby, and the scent of the various brews tantalized her senses. She chose peach, a flavor that always helped her relax.

Then, as she turned away to head toward the elevators, she bumped smack into a solid wall of masculinity, spilling her hot tea all over the shirt of the man standing in front of her.

She looked up…and up. The first thing she noticed was he could model for a photo of warriors. He was tall, lean, muscular, with a shadow of a beard lining his jaw. His eyes were a piercing blue, and the whole image was accented by a stripe of white hair that ran backward from his forehead. For a moment she was frozen in place, mesmerized. Then reality jabbed her. She grabbed napkins from the drinks wagon and tried to blot his shirt dry, but he stayed her hand.

“I’ll handle it. Don’t worry.” But he was pulling the damp material away from his chest and removing the hot liquid from his skin.

His voice was rich and deep and sent shivers along her spine. A sharply defined jawline and angular cheekbones were highlighted by electric blue eyes and thick lashes. His lips, curved into a hint of a smile, looked as if they were usually set in a grim line. She wondered what had created that change.

Flustered, she made things worse because she was still holding the now half-empty cup of tea and more splashed out of it. When she turned to toss the cup into the trash, her hand bumped the metal edge of the counter. She dropped her purse which then fell open, scattering her things on the floor.

If she could have melted into space, she would have done it. Instead, she crouched down, doing her best to gather items and stuff them back into her purse. And of course, the stranger insisted on helping her.

She grabbed her key card from her purse, and in the process scattered some of the contents again. God. If only the floor would just open up and swallow her.

“You going to your room? Come on, I’ll make sure you get there.”

Go with a strange man up to her room? Was she crazy? Absolutely not!

“You’re bleeding.” The stranger took her hand and lifted it. “You must have hit it pretty hard on the counter.”

She glanced down, shocked to see blood welling from a long cut and running down over her fingers. Holy god. What next?

The stranger grabbed more napkins and pressed them against the cut.

“You can’t let something like that go. It needs attention. If you’d rather, I can take you to a walk-in clinic—?”

“Do you have bandages? Antiseptic? If not, you could be courting an infection. I can fix it, at least temporarily.”

She was so rattled she didn’t even have the brains to refuse. Instead, she let him lead her across the lobby to the elevators. Inside the car, he punched the button for the tenth floor.

“But the first aid’s on the tenth, in my room.”

He was taking her to his room? What if he…?

Still in a daze, she followed him down the hall and into his hotel room. She had to admit he was very efficient in cleaning and bandaging her cut.

He shook his head. “Former SEAL. We learn how to field dress wounds. Okay, there you are.” He frowned. “You’re still trembling. What can I get for you?”

“Can you just hold me for a minute? I’ve had the day from hell and this hasn’t helped.”

For a moment he looked as if he were about to refuse. But then, just as she was about to get up, he put his arm around her and pulled her against him.

“We should at least introduce ourselves. I’m…”

She held up her hand. “No names, okay? I… It’s better this way.” She tried a smile. “More mysterious.”

“Okay. Just call me Eagle, then.” His mouth curved into a hint of a very sexy grin. “That was my call sign in the SEALs.”

She figured the streak in his hair had something to do with that.

When she didn’t respond, he shrugged. “Okay. No problem.”

And still he held her.

A multi-published, award-winning, Amazon and USA Today best-selling author, Desiree Holt has produced more than 200 titles and won many awards. She has received an EPIC E-Book Award, the Holt Medallion and many others including Author After Dark’s Author of the Year. She has been featured on CBS Sunday Morning and in The Village Voice, The Daily Beast, USA Today, The Wall Street Journal, The London Daily Mail. She lives in Florida with her cats who insist they help her write her books, and is addicted to football.