Adorned in Blood by L.S. Barron 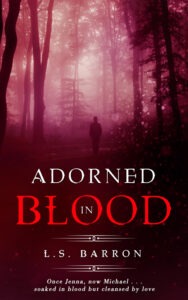 Once Jenna, now Michael…soaked in blood but cleansed by love. I sink my teeth into the pulsating artery. Crimson red blood sprays across the misty fog.

Michael is a transgender teenager who is well on his way with his gender transition and finding a life path that better suits him. And as if that weren’t enough of a freak-out for the teen, he’s been turned into a vampire…a Nosferatu!

Luckily, Michael has a group of good friends to help him through his struggles, and who would think that this would be when he’d find love for the first time?

But just to keep his already-interesting life in a wee bit more turmoil, a murder leads to a discovery that could change not only his life but the lives of everyone he knows…and loves.

Reader advisory: This book contains scenes of violence and murder, the death of a parent, attempted suicide, and bullying.

The golden rays from the alleyway streetlamp glimmered through the mist and fog. The drizzly rain fell lightly upon my eyelashes. I felt the coldness as it wreaked an ill chill through my body. Somehow, the thirst had taken over once again. Everything else in my mind had been put aside.

The back door of the diner opened. It was a shabby place—hardly even a rat dared linger there, except the rat that ran the place. There in the mist was the man himself, throwing out the night’s garbage into the already rank alleyway. He was a savage of a being. He was mean to my kind, mean to all kinds.

“Hey, kid, what are you doing back here?” the crotchety man asked.

I wiped the rain from my eyes. The saliva ran down the side of my mouth. Attack!

It was soon over. I so liked the color blue and how it looked on me. I thought it brought out more of the blue in my hazel eyes. Almost all my shirts were some shade of blue. Dang, I shouldn’t have worn my favorite.

The blue T-shirt had streams of crimson red blood running down it, like it was a newly designed pattern, meant to be that way.

The savage lay at my feet, lifeless. No more will he be unkind to me…or to anyone, for that matter. I pushed the man’s side with my sneaker to make sure he was now lifeless. There was no movement, no breath. Dead.

I wiped the blood from my face on my arm. I looked up into the drizzly rain, letting it rinse my face clean, erasing my sinful act. I admired the rays of light from the streetlamp. I felt pure, rejuvenated. I was not mournful for the beast of a man. There was no regret. I felt renewed and fell into a deep, restful sleep.

My alarm clock sounded. Morning had quickly arrived, with the memories of the night only a fleeting moment in my mind. The school day ahead was not what I was worried about. I combed my now short blondish-brown hair as I stood in front of my bedside mirror. I glanced down at one of my old swimming trophies. ‘High Point Award, 9–10 girls, Jenna Holliday’. Jenna Michelle Holliday, hmm… I chuckled. Yes, that once had been my name. Now, however, it is simply Michael Holliday.

I repeated that in the mirror out loud. “Michael Holliday.”

The name flowed so much better off my tongue. It felt right. It felt comfortable, fitting.

When did I know that I was Michael and not that lost girl Jenna? Probably before I even had memories. My mom told me that by the time I was two, I had already started showing preferences toward the other gender. She told me that I would just drag my doll around by its hair like I hated the thing. Then I would fight the neighbor boy for his Matchbox trucks.

In my memory, I’d known by kindergarten at least. I’d known for sure dresses were out. All I’d wanted to wear were jeans and a T-shirt so that I could play roughhousing games with the boys any chance I got. I’d loved to fight, play football and wrestle. I’d wanted everything in a boy’s life. I’d found no use for my girlie body and didn’t feel like it belonged to me. I’d kept it at a distance, almost, like looking into the mirror and not seeing my real self.

Things have changed now. I was F2M post-op, at least the top half of my body, which I now loved. I was going to leave the lower stuff alone for now. Mom and Dad had been super supportive, so that was pretty cool, not like some kids who I’ve seen struggling. I’m on the T—testosterone injections. I was starting to finally show some facial scruff. That was pretty sick. I could do without the excessive underarm odor, but that was what Axe was for, I guessed. I have noticed of late that my shoulders are getting broader, but I also work out in the gym pretty hard.

However, right now, besides all this, I have this new thing to deal with. It’s not like being sixteen brings enough problems already. Now I’m cursed with this bloodthirst too. I can’t even remember who did this to me, but I’ll find out. I’m going to have my revenge!

I had my suspects. Number one on my list? Mr. Drakon Branikov, my high school’s history teacher. I think he’s from Bulgaria—or maybe Hungary. I’m not sure, but he’s definitely not from around here.

Mr. Branikov has long hair that he keeps pulled back in a ponytail and dark brown eyes, almost black. I feel like he could stare into my soul, though the girls seem to gaze at him in adoration. He dresses strangely, almost old-style, yet he seems young. That brought another question to my mind. Why does he always seem to look the same age? Other teachers had gotten older over the years. Not Mr. Branikov. I had lived in this town all my life. I had paid attention. This teacher was not what he seemed.

I had permission that night to go out with friends after the high-school football game. My plan, though, was something completely different. I would follow my suspect.

There had been criminals missing around town. There had been missing girls, not schoolgirls but ladies of the night, the skanky kind. I had done my research at the library. It seemed that the local papers showed that there had been several unsolved deaths and missing persons in recent years. Guess what? All since Mr. Branikov and his family had moved into town.

It seemed the cops didn’t care much. Why would they? The town was becoming a safer and nicer place to live.

It had been a while since anyone had been missing or killed. I figured, if Mr. Branikov was like me, it was time to rejuvenate. I knew I could go a month or so, but not much longer. I didn’t know about Mr. Branikov. Is he an old Nosferatu? Did he draw the blood from my body first? Did he cause my thirst? Why?

This notion that one should be moral and only live on animals? Yeah, that didn’t work. I’d tried. No, only the pulsating blood of a human would suffice. So, I’d choose the most immoral beings that I could find—at least I’d try.

This would be a good night to feed. Town would be busy. Lowlifes would be crawling about, looking for trouble. If my suspicions were right, Mr. Branikov would feed and I would be there!

Mr. Branikov departed the stadium from the back entrance. It was dark and quiet, leading down the back alleyway of the high school. I followed at a distance. I thought we were alone.

“Hey, Michael…or is it Michelle? No wait! Wasn’t it Jenna?” I heard from behind me, along with sudden laughter.

I turned. It was James Day and his pack, some of the popular boys who I found to be very irritating.

“Come on, James. It doesn’t even know what it is,” another boy said, as they all laughed again.

The pack walked closer to me. James looked at me and shook his head. “Well, it got rid of its boobs. Maybe we should see if it has any balls.”

My anger rose and I saw the vein in James’ neck pulsate. He was a jerk. I was losing my thoughts. Everything was starting to spin. Attack!

In the blur of the moment, out of the darkness, I felt a hand on my shoulder.

“Not now. It’s okay,” a calming voice whispered in my ear.

I turned to find Mr. Branikov behind me. I heard the pack of boys scatter. Mr. Branikov was standing there. He smiled, pushed the hair away from my eyes and gently said, “Walk with me.”

I learned that night that Mr. Branikov was who I’d thought him to be. However, he had not doomed me to this life but had saved me. I learned that while I had still been Jenna, before I had come forward about my true self, I had been very unhappy. Mr. Branikov told me that he’d found me below the old town bridge with hardly a breath left. He’d chosen to save me.

I didn’t remember any of this. It was after this moment that I had gone forward in my life. I’d found my new self. I found new meaning. I’m a new creature—actually two new creatures—although I think I’ve always been the one. I’ve found happiness at last.

Laurie enjoys taking advantage of the warm desert air in the winters and roams the mountains of Colorado in the summers. She is a retired fire captain and is now taking advantage of her time to develop her writing skills. On many occasions, you can find her at the local coffee shop working on her next story.

Laurie likes to point out that her six grandchildren contribute many of the ideas for her stories and she often uses their creative thoughts in her books. Their language skills come in handy when working on any middle-grade or young-adult book. “Bro, that is so lit!”

L.S. BARRON IS GIVING AWAY THIS FABULOUS PRIZE TO ONE LUCKY WINNER. ENTER HERE FOR YOUR CHANCE TO WIN A LOVELY GIFT PACKAGE AND GET A FIRST FOR ROMANCE GIFT CARD! Notice: This competition ends on 6TH April 2021 at 5pm GMT. Competition hosted by Totally Entwined Group.