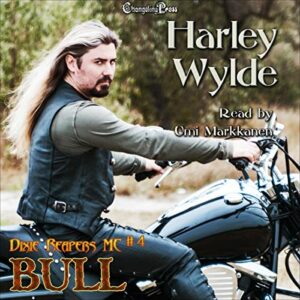 Darian: When the guy I’d been seeing turned out to be a rapist sleazeball, I ran… and it led me straight to him. They call him Bull, and I can see why. The guy is massive, and I do mean everywhere. He’s so much older than me, but I can’t seem to care. The way he holds me, murmurs softly to me, I feel safe. No one’s ever cared what happened to me, but he does. I can tell he wants me, even though he’s fighting himself. But he doesn’t have to… because I’m his. I’ve held onto my virginity all these years, but I want him more than I ever thought I’d want someone. I want his hands on me, his body over mine. And for once, I’m going to get what I want. And I want Bull.

Bull: Darian’s younger than my damn daughter, but there’s something about the sweet girl that draws me closer. When I look into her eyes, I see that she’s a fighter, but I can also see that she’s been badly broken, and I want to be the one to put the pieces back together. I have nothing to offer her. There’s more than twenty years between us, and I know I need to walk away. I’m just a dirty old man who wants her under me. I’m hard as a damn post anytime she’s nearby, and I have to fight the urge to spread those creamy thighs of hers and drive into her, claiming her body and making her mine… until I have no fight left in me. I wanted to be a better man, to walk away, but I can’t. She begs me so sweetly, and soon I can’t resist anymore. She’s mine. And any fucker who tries to take her from me is going to die a slow and painful death.