Buried by Despair by Jayce Carter 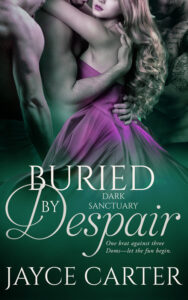 Book 3 in the Dark Sanctuary Series

One brat against three Doms—let the fun begin.

After an attack leaves Kat with scars—both the ones on her skin and others far deeper—she tries to hide from the world. Even going to Sanctuary, where she’d always felt safe before, seems too difficult. Each time she looks in the mirror, she can’t see the confident woman she used to be.

Dean, Olin and Bradley can’t stop thinking about the feisty brat who has lost her spark. They miss the way she used to smile, how she stood toe-to-toe with anyone, and now they’ll do whatever it takes to help her find that part of herself again.

A happily ever after will be more difficult than any of them expect, however, as the threat to Kat turns out to be far from over. Bodies start to appear that look just like her, and the man who hurt her is closing in on them all.

Can Kat find her strength again or will the man stalking her finish her off this time?

This isn’t right at all.

Frustration caused Kat to toss her pen across the desk. After six different attempts at the same cartoon, she’d hit her limit.

She needed to get something new up on her store, since she’d kept up with a biweekly schedule for over two years without fail, but nothing had come to her. Somehow, all those cute little ideas she normally had, the quips, the humor, the adorable characters with large eyes and charm, sat just out of reach.

Kat folded her arms on her desk and dropped her head onto them. Her back ached from the hours she’d spent staring at her sketch pad, from all the attempts that had led to nothing. She kept thinking that if she started drawing, some idea would come to her.

It always had before.

Each time she tried, her brain went AWOL, and she found herself back in that damned hotel room. A flash of pain, the memory of a smirking face—

“Knock it off!” She stood, shaking her hands as if that would dispel the memory she’d been running from for the past few weeks.

It didn’t work, but what other option did she have?

Kat paced, then reached to smooth her hands over her hair. She grimaced at how oily it was. How long had it been since she’d washed it?

The sensation grossed her out, but the idea of stripping down, of taking a shower, that seemed far worse. She hadn’t been willing to attempt it, choosing instead to use clean wipes on the important areas.

Fox Asher, the doctor who had taken care of her at the hospital, had said no baths anyway.

Fine by me. What does it matter?

Kat sighed and shook her head. She’d never been a coward before, so what was wrong with her now?

The ringing of her phone made her jump, her fingers clutching the front of her button-up pajama top, as if holding it closed made it into some sort of armor. Once it filtered through her head that it was only her phone, Kat cursed herself and picked up her cell from the desk.

Sunny’s name flashed across the screen, and the desire to ignore it hit her.

Then again, if she didn’t answer, Sunny would show up with Garrison, Connor and Trent in tow. Kat had ignored calls for days, having no desire to talk to anyone, but that sort of understanding only went so far.

She sighed and answered the call. “Hey, Sunny.”

“Kat…” Sunny’s voice was exactly what Kat didn’t want to hear. It was pity and worry.

At least it was Sunny and not Ell, though. Sunny was sweet and worried, but Ell had been there. Kat couldn’t handle seeing that knowledge in Ell’s face.

Kat forced some levity into her voice, faking a smile she didn’t feel. “What’s with that voice? Did you make the mistake of taking my advice and hiding Trent’s paddle?” The last word caught in Kat’s throat.

Something that would have made her laugh before felt like swallowing rusty nails, and that same memory of pain hit her.

“I just miss you,” Sunny said, ignoring Kat’s statement. Damn, it would have been so much easier if Sunny was carefree. Instead, she had that ‘I really care’ tone of voice.

“Uh-huh. Well, I thought maybe you could come over soon? We could have dinner. I’ll cook something you love.”

Sunny sighed. “You can’t just hide away from the world.”

“I know how you feel, but you don’t have to go through this alone.”

Kat squeezed her eyes shut and trapped the words she wanted to scream inside her head. She wanted to tell Sunny that she had no idea what Kat was going through, that she didn’t need sympathy, that what she needed was to get back to regular life and forget the whole thing as soon as possible.

“There isn’t anything to worry about,” Kat said. “I really need to get going, though. We’ll talk again soon, okay?”

Sunny’s voice echoed through the line, but Kat didn’t want to hear it. She hit the End button, her head pounding, her breath racing. She all but collapsed into her office chair, her knees weak and her hands trembling.

The ringing of the phone made her squeeze her eyes shut as she dropped her head into her hands and ignored the sound.

Her life had changed so much but she couldn’t move forward.

And each time she shut her eyes, all she could see was the face of the man who had done it to her, who had turned her into this, and she wasn’t sure if that would ever go away.

‹ The Last Warrior by Karen Kay › Mr. Perfect on Paper by Jean Meltzer