Call It Love by Kristian Parker 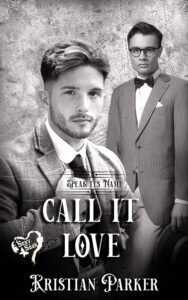 Charlie didn’t believe in love…until he set himself free.

It’s 1922 and after his house guest Frank Harris ran away with the under-butler, Charlie Fitzwilliam has been summoned to face the music. With the vindictive butler Bennett now watching his every move and his father planning out his life for him, Charlie finally faces up to who he is and makes a bid for freedom.

Alone for the first time in his life, he meets Michael Leonard, a kind, caring bookseller. Convinced that sex with men is only for fun, Charlie experiences a summer of self-discovery that takes him to the English seaside, the doorstep of old friends and the arms of a lover who shakes his whole belief system.

But disowned by his parents and cut off from the life he knew, can Charlie make a future for himself…and will Michael be a part of it? Is this affair something that can be called love?

I threw the ball with the top spin that had sent our team to the top of the league last term. It flew past Mateus’ head and smashed into the wickets.

“Oh, well done, Charlie,” shouted my mother from the sidelines. Nothing would have persuaded her to roll up her sleeves and join in. I smiled across and waved.

“Time for a break,” said a breathless Tilly, my baby sister. She couldn’t have been any different from my mother if she’d tried and had instantly plumped for the back stop, tucking her skirts between her legs.

We wandered across to the table where mother held court to our host, Domingos Graça. He lapped up her brand of flirtation and would laugh uproariously every time she gave him a little bit of gossip from London.

I picked up a glass of whatever they had served and took in the view. Vineyards stretched as far as the eye could see, rolling down the hill to the river. We were in the Douro Province in the north-east of Portugal—Port was big business in these parts, and the Graça family were the kings of their castle.

Their villa loomed behind us, proclaiming to all the rewards of their labour.

“She put you to work immediately? Hard luck, old chap.” Agnes had sidled up next to me without any noise. She had always been able to do that, even when we were small.

“You too.” She planted a firm kiss on my cheek. “At least I’ll have some fun now. Mummy and Daddy’s crusade for cash is getting embarrassing.”

I turned to see my mother and Tilly regaling the Graças with yet another story.

“Tilly is doing the work for all of us.”

“She thinks she’s getting the youngest boy, the one you nearly decapitated with your demon bowl just now. She isn’t. He hasn’t given her a second glance. Poor soul.”

Tilly had always been the odd one out. Two years separated me and Agnes, but Tilly was a surprise after my parents had taken a boat to India. We’d been sent away to school by the time she came along.

I couldn’t even bear to think about it. “He’s locked away in his room with Bennett. They’ve been in there ever since Bennett and I arrived this morning.”

It had been two weeks since I had thrown my schoolfriend Frank Harris out of our house in England after one of our maids had caught him in a compromising position with an under-butler. I’d spent that time skulking around the house, ignoring the whispers from most of the staff.

“And how did you find travelling with Bennett? Naughty Charlie can’t be trusted on his own,” Agnes said, a twinkle in her eye.

Bennett hated anyone in this world who wasn’t my father, and my uneasiness at him being a part of this trip had built as each day passed. He had been smugness personified, attending to my every need but always with an undertone of insolence.

We strolled along the edge of the lawn. Agnes took my arm, and I realised I’d missed my sister.

“Come on, then. What the hell were you doing?”

I absentmindedly kicked the head off a wildflower that had dared to invade this garden of order.

“I didn’t do anything. I stupidly invited Frank Harris to stay, and he ends up buggering the help.”

Agnes laughed. “And I suppose you were in bed reading your Bible.”

“If you must know, I was entertaining Elsie.”

Agnes stopped and scowled. “That common little tart from the shop? Oh, Charlie, you can do better than that, can’t you?”

We carried on walking. The breeze was a blessed relief as the sun grew high in the sky. I hoped there were more sedate activities planned for the afternoon.

“Port.” Agnes growled. “I’m sick to death of hearing about it, drinking it, examining it. You’d think it was sent by God himself.”

It wasn’t like Agnes to be so cranky. Mother and Father had impressed upon us the importance of this trip. If we didn’t get our hands on a sizeable share of the Graças’ business, we would struggle to keep our house in the Oxfordshire countryside. Since the war had decimated the workforce, farms were struggling to pay rents, meaning big country houses were closing at a rate of knots.

She scowled. “Worse. Three weeks of rattling around here. Tilly sucking up like her life depends on it, Daddy laughing at jokes that simply aren’t funny and Mummy attempting to flirt is hideous.”

I glanced at mother and Domingos. He was telling her some tale, and she was all a-quiver.

Agnes’ gaze darted to the terrace in front of the house. Mine followed and there stood my father. All six foot four inches of him with a face like thunder.

“Charles,” he boomed. Every eye turned to me.

“Uh-oh. You’re for it now,” Agnes said through gritted teeth.

It felt like the longest walk of my life. I trudged across the cricket pitch and up the ridiculously long flight of steps to the terrace. Bennett stood at the top with that look he’d worn for the entire journey here. I wanted to wipe it from his face.

“He’s waiting for you in the drawing room.”

“He’s waiting for you in the drawing room…sir.”

I had no idea what rubbish he had fed to my father, but I would not be disrespected by him. I stood waiting for a response.

“Of course, sir.” The smugness never left him.

I found my father pacing in the lounge. In his early fifties, he had an imposing presence. Hardly any grey ran through his dark hair and moustache. I will admit that my stomach churned when I walked in.

He stopped pacing and glowered at me. “Homosexuality in my house? What are you trying to do, boy?”

“I had no idea what Harris was up to, and I threw him out when I discovered, along with that good-for-nothing Tanner.”

Frank would never understand the position he had put me in. I could have spit in his eye.

“Of course I don’t expect you to know what your friends are getting up to when your back is turned.”

My body relaxed a little.

The room had started to spin. How did he know about Albert? “I don’t know what you’ve heard, but that’s a lie.”

Someone cleared their throat behind me, and I whirled around to see Bennett.

“I brought your post, sir,” he said walking past me and placing a bunch of envelopes on the desk.

“How dare you come in here when I’m having a private conversation with my father?” I cried.

“I asked him to come in. Now, Bennett, tell my son what you’ve just told me.”

With an audacity I would pay him back for one day, Bennett put on his best pitying expression for me. “My apologies, young sir, but I had to bring it to the master’s attention. I happened to overhear Mr Harris and his terrible accusations.”

Always sneaking around, listening at doorways. I was shaking with fear and rage.

“Naturally I had to investigate this for myself. Poor Albert had no choice but to indulge you in your…unusual requests. He said you threatened to have his livelihood taken from him if he didn’t.”

“That is a lie. I would never do that. Albert and I—” I stopped.

“Albert and you what?” asked my father “That will be all, Bennett.”

“I asked you a question. Albert and you what?”

I took a deep breath. “Albert and I enjoyed some mutual time together.”

Out of nowhere, my father slapped my face, so hard it threw my head to the side.

“How could you do this to us? Get up to your room. I don’t want to see your disgusting little face until dinner time.”

I started to walk away, my face still smarting.

“By then I will have decided what to do with you. You will not bring shame on this family.”

I pulled open the door and walked straight into Bennett. I grabbed hold of his shirt and pushed him against the wall. He let out a little yelp.

“You may think you’ve won some game, but you will regret this one day. You will never be anything other than a pathetic little man who listens to other people’s lives.”

I let go of him and started to walk away.

“I am taking care of the family. I do care.”

I didn’t wait for the reply.