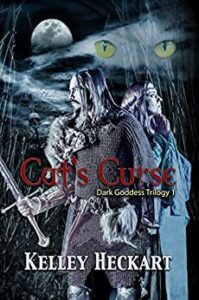 Blurb/Back cover copy: Do you like romance, intrigue, and star-crossed love? Set in Dark Age Scotland, this epic paranormal historical is based on a real Irish prince with a shadowy past who became one of the most feared warlords of his time. The Welsh called him “Aedan the Treacherous,” and his bloodline can be traced to the first king of Scotland, Kenneth MacAlpin. Some historians believe he was the real King Arthur.

Two tortured souls, and a dark Fae goddess who is determined to destroy them.

For centuries, Cardea has been called demon, succubus, Lamia. She must drink blood to survive and has lived with hatred for those who cursed her. Now, she finds herself at the end of a sword blade held by the most fascinating man she’s ever met. Something she cannot understand draws her to him. Instead of the urge to kill him, she wants to help him.

She worships the Great Goddess. He is a Christian.

Aedan mac Gabrain, prince of Dal Riata, trusts no one after suffering a curse that prevents him from touching any human females or he will turn into a black cat like his brother. Cardea has a hold on him he cannot explain, and she may be the one who cursed his clan since no one knows Cat Anna’s true face, or she may be the only one who can help end his curse.

Despite their differences, their affection for one another grows. They must find a way to battle the Dark Goddess before she takes something most precious from them.

Warning: Iron-willed enchantresses, hunky sword-wielding warriors, some violence and steamy sex, more than a little blood-drinking, a complicated love triangle, and lots of passion.
Note: This 3-book series must be read in order.