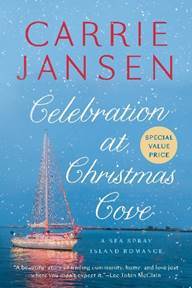 Travel magazine writer Celeste Bell is in a terrible mood. Not only was her flight to the Caribbean diverted to a Massachusetts island, now it looks like she’ll have to spend Christmas there. Single and still mourning the loss her mother a year earlier, Celeste is desperate to avoid any emotional entanglements and all holiday festivities. She just doesn’t feel like celebrating.

But that’s exactly what community center executive director Nathan White and his young daughter, Abigail, want to do. Nathan is entirely focused on making sure that his daughter has a happy Christmas, especially with the knowledge that if he can’t raise money for the community center soon, it will close and they’ll have to leave the island. When he meets Celeste, Nathan begins to feel a connection and wonders if he’s brave enough to risk his heart once more.

Thawing their frozen hearts and saving the community center will require a Christmas miracle. But tis the season…

Carrie Jansen earned an MFA in creative writing and published many poems and short stories before becoming a novelist. An avid bodyboarder and beach walker, she spends as much of the year as she can on Cape Cod, where she draws inspiration for her contemporary romances. She also writes Amish romance novels under her pseudonym, Carrie Lighte. Learn more online at carriejansen.com.