A long time ago, but in this actual galaxy, a writer of romantic suspense accidentally wrote a science fiction romance book called The Key. It was shocking. She didn’t do science! Then she thought about it and decided that maybe her science has been fiction since high school. Or sooner.

She thought it was a one-off, but readers loved it so she wrote another. And then another.

And realized she had a series. She called it Project Enterprise and now she’s just released Book 9 in the series. There are also seven side stories.

What is the series about? Besides science fiction romance?

I interviewed myself about COSMIC BOOM: PROJECT ENTERPRISE 9.

Yes, you read that right. I did interview myself about what went on behind the scenes while writing this book:

I: So let’s talk about the science in your science fiction. How did that go this time?

Me: Well, I did push the boundaries of the science (shocking right?), something that caused my wonderful editor, Alexis Glynn Latner, many headaches. She’s very nice about dialing me back into the somewhat believable range (this is science FICTION after all).

I: So there’s that. And then there are the characters. What do readers need to know about your characters?

Me: Ever since we all met the robots of the Najer in Lost Valyr, they’ve been jostling for their own stories. I have been trying to keep track of who has been in what book and who is a robot and who isn’t.

I: There’s not that many of them. It shouldn’t be that hard.

Me (gives myself/I a LOOK): So in this book, BoomerJ (aka Boom), won the draw, mostly because I knew he was still a robot.

I: What I find so interesting, you start with the same basic thing: a robot who used to be a human and is now trying to be human again and they should all be kind of alike. And yet, somehow they aren’t.

Me: I guess it is that human factor that makes the difference. And they help with their story. I know, it sounds crazy.

Me: But that is how it goes inside my head.

I: There is something else unusual about the characters in this book.

Me: Yeah,  I usually make my heroines tall, a bit flat-chested, and loaded with issues.

I: I wonder why that is?

Me: [ignores I/myself] But this time? Hedy Quinton is a total bombshell. Hollywood vintage bombshell type and named after Hedy Lamar. This never comes up in the story, so this is dishing a real secret. Maybe.

I: It’s not like she’s trying to keep it a secret.

Me: No, but it didn’t come up in the story because she doesn’t care how she looks unless it helps her get done what she needs to get done. And her biggest issue is learning how to navigate her first command.

I: So that’s Hedy. A bombshell who falls for a former robot. Anything else we should know about her?

Me: She’s got daddy issues, but not the robot kind, so the road of their love story is not smooth.

Me: I know, I keep thinking I should stop with the AIs, but they keep popping up. I suspect an AI plot.

I: Tell us about Roy.

Me: Roy somehow manages to be unique and even has a few secrets that cause problems for Hedy.

I: And of course, you know there is at least one villain.

Me: Well, we’ve got to have someone making trouble, because Hedy and Boom don’t have enough problems already.

I: How does that even work?

Me: Well, so what happens behind the scenes is all these characters start to take shape and bump against each other in a random and yet VERY scientific way. Okay, it’s probably more like a very fantasy way. That science is probably made up, too.

I: Your science is always made up.

Me: [ignores I/myself again] But they bang around inside my head and surprise me over and over again. So I hope they will surprise you, too!

I: I know they surprised me. Us. Whatever. Any final words for our viewers, er, readers?

Me: I had a lot of fun writing this book. I know, I always say that, but if I don’t have fun, you won’t have fun. And I’d quit writing because it isn’t fun.

I: So what’s the blurb for this book?

A critical mission, a cosmic event, and a secret…

USAF Captain Hedy Quinton joined Project Enterprise to travel to distant galaxy. Excited to receive her first command, she’s less excited about the lonely AI in her ship’s systems, the “ally” who thinks he should be in command, and the passel of dubious scientists. At least her deck officer, a former robot, is a really cute guy. And none of her scientists is named Dr. Smith.

BoomerJ—known as Boom—is still getting used to his new human body and all the feelings and needs his robot body never had—especially around Hedy.

While Hedy navigates the challenges of command, such as sending Boom into danger, and her feelings for the former robot, she also has to deal with betrayal and the unexpected.

Can their love survive a cosmic event, betrayal, and the secret of Boom’s past or will they be destined to remain lost in space?

If you love your chemistry interstellar, your action fast-paced, and your space opera sprawling, then grab COSMIC BOOM, the ninth entry in the award-winning Project Enterprise series, and take an exciting adventure into the unknown. 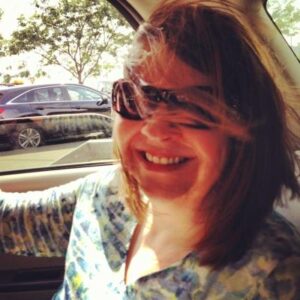 USA Today Bestselling author Pauline Baird Jones never liked reality, so she writes books. She likes to wander among the genres, rampaging like Godzilla, because she does love peril mixed in her romance. She also loves chocolate, bacon, flamingoes, and mid-century modern anything.