Cross My Heart by Aliyah Burke 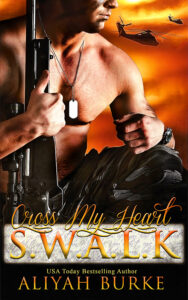 One night together can lead to forever…

Rash decisions had not really ever been her thing, until one night in a bar with her brothers had Cynzia Cassano irritated enough to kiss the next guy walking through the door. Little does she know that he is going change her life.

Lucas Hoch is out with his best friends when a woman that knocks his world on its axis kisses him. Unable to forget her, he follows and takes the night with her she offers. It will never be enough. She is gone when he wakes and he will scour the earth to find her again.

When their paths do cross once more, as much as he wants to keep her, she is a woman with her own strong mind and life to live. Will there be room in their lives for each other?

Reader advisory: This book contains characters from Casanova in Training and Temporary Home.

“Come on, sweetcheeks. Don’t be like that. This is your lucky night.”

Cyn tucked a curl behind her ear, opening her mouth to inform this man—and that was a term she used loosely—just how wrong he was just as two men, both taller than her, appeared at her side.

The man, Jack, she recalled his name being, eyed them both up and down with challenge. She fought to hide her snort.

“You know,” she remarked as if his life weren’t in danger, “you should probably just walk away now.”

Jack puffed up and sent another scathing look at the two males beside her. “These your men? You one of those broads who enjoys more than one dick at a time?”

“Oh,” she said with a smile, “these aren’t my dates. But you’ll wish they were.”

He snorted. “Who are they then?”

The words barely had time to leave her mouth before her two brothers each took one of the obnoxious man’s arms and backed him away from her. Not the slightest bit polite about doing it either. Rolling her eyes, she turned back to the pool game she’d been keeping an eye on and sucked on the straw while watching the woman there set up the man she was playing against.

One shoulder up in a shrug, she waited until the woman sank her latest shot before glancing back to her brothers. They were triplets, the three of them—she was not only the youngest but the only girl—and it tended to make her brothers a bit overprotective.

Michael, the eldest, wrapped his arm around her, and she sank into him. She was also the shortest, not having gotten the height the boys had from their father, Giovanni Cassano. She was closer to their mother’s height.

“What are you doing here, Cyn?” This time the question was posed by the middle brother, Dante. “Why aren’t you home with Mom?”

Pushing her now empty drink at her brother, she turned to be able to see them both. “I’m not in diapers. I’m twenty-three, same as the two of you. I am allowed to go out to bars.”

Michael growled low in his throat. “And get picked up by assholes like the one we just had to chase off? You should be smarter than that.”

That dig hurt and pricked her normally laid-back temper.

“One, I wasn’t getting picked up. He was hitting on me, and I was about to tell him to fuck off when you two walked over.”

“You didn’t tell us where you were going,” Dante snapped.

“Of course I didn’t. I needed to get away from the smothering. You two are far worse than Mom and Dad, and let’s face it, between Dad and our uncles, I didn’t think anyone would be able to be worse. But you two have surpassed them with flying colors.” They both grinned. She scowled. “Not something to be proud of. I came here to get away from everyone.”

“We followed you.” Michael pointed out the obvious.

He had always been so literal. A lot like their mom, Jaydee. Very blunt and took statements as they were given. He didn’t have the time or the care to try to see if there were hidden meanings in the words coming out of someone’s mouth.

Cyn flattened her lips and took several deep breaths. It wasn’t like she didn’t love her brothers. She did, and she would die for them in a heartbeat. However, she also wanted to do things without them. Like find a man and have sex. Lots and lots of it.

His tone told her everything. He found nothing wrong with his behavior.

“I am, yes. And I love you both. But you have to stop following me everywhere. I’m capable of taking care of myself. I want to go out and not see you boys there behind me, scaring away a guy I may want to talk with.”

Dante crossed his arms. Michael ran his gaze over her.

“You want us away because you are looking for sex.”

May the good Lord just let the floor open up and swallow her because she was mortified. Her siblings weren’t quiet, and Michael’s statement had gotten more than a few males’ attention.

She ignored the flush scampering over her face and held up her hands. “Stop it. Right now, both of you. You’re trying to get me to leave, well, fine. I’m leaving.” They both stepped forward, but she shook her head. “No. I’m leaving by myself. I’m going to a different bar and I don’t want to see you until morning. We’ll meet at the hotel for breakfast. We’ll talk, laugh, and I will go with you to the airport to get you on a plane to head back home and let me enjoy my trip.”

“You’ll be without protection,” Dante protested.

“I don’t need it. I grew up in the same house as you did. We have the same parents. The same uncles. All of whom taught us self-defense. Not to mention Aunt Bailey.” She took a deep breath. She wasn’t a schoolgirl who was in danger. She knew how to take care of herself. “I’m leaving now. And I’ll show you I can survive by myself. I’ll even kiss a guy on my way out, and you’ll see, it will be okay.”

Pushing up on her toes, she kissed Michael’s cheek then Dante’s. She walked to the door after putting her empty, which she had taken back from her brother, down on the bar. As she neared the exit, three men walked in that took her breath away. All of them were fit, and she would bet her life they were military. Having grown up in her household, it was easy to pick them out.

It was the man in the middle, though, who made her heart beat all the faster. Darkly tanned skin, short black hair and a body she would love to touch. He turned toward her as he looked around the establishment and his lips quirked up in the left corner of his mouth. Those blue eyes mesmerized her, and she nearly tripped over her own feet.

Standing before him, before she could talk her way out of what she was about to do, she smiled. He replied in kind.

She slid her arm around his neck and once again stood on her toes. This time, instead of the cheek as she’d done with her brothers, she went for his mouth, to touch those bow-shaped lips.

Seconds later his hand palmed the nape of her neck, holding her close in a proprietary motion as his other hand pressed against the small of her back. His tongue dipped inside her mouth and teased hers.

Cyn scrambled to get her senses back enough to pull away. She didn’t want to, even as she did. The din of the bar faded into obscurity, and all she could focus on were this man and the harsh pounding in her chest combined with the way her lungs struggled for air.

Forcing her legs to move, she ducked by the men there and walked out of the bar.

Aliyah Burke is an avid reader and is never far from pen and paper (or the computer). She is happily married to a career military man. They are owned by six Borzoi. She spends her days at the day job, writing, and working with her dogs. She loves to hear from her readers and can be reached here. She can also be found on Facebook or Twitter: @AliyahBurke96. And Pinterest.