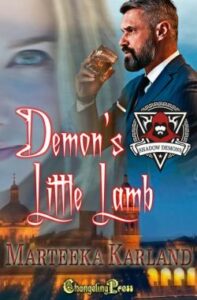 A Shadow Demon infatuated with the enemy: Azriel Ivanovich knows the new intern he’s hired at Argent Tech comes with a price tag. It’s possible the young, sexy college grad is in bed with the people trying to stage a takeover of the company he and his brothers built as a cover for their underground activities. With the help of a former member of one of the most dangerous and influential shady organizations in the world, Azriel and the Shadow Demons are about to stage a hostel takeover of their own. Of the permanent kind.

A little lamb lost among the wolves: All Lamb Newsome wants to do is start an exciting, promising life after graduation. The little break she takes in the Florida Keys before starting her new internship started things off smashingly. There she meets a wealthy man who is familiar with Argent Tech and they hit it off from the start. Both in bed and out of it. When she finds out he’s married, things unravel quickly. The mess that follows isn’t what she expected, however. Instead of a jealous wife, she has one of the owners of the company after her. In retrospect, she realizes she really shouldn’t have fallen for the guy, but the sex is just that good.

Betrayals and secret wars: Had she known the stakes, Lamb wouldn’t have bet her heart. Now all she can do is believe in her Shadow Demon — even if she doesn’t know how he lives in the shadows. Now, she has to survive. But how is she supposed to do that on her own? And how can she ever trust her heart again when all it wants is the Shadow Demon she can never have?