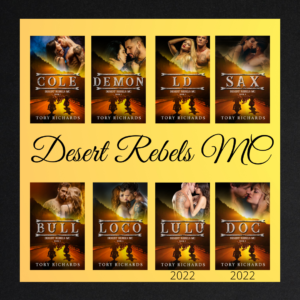 He can’t resist her. She can’t refuse him. Lies will rip them apart. As enforcer of the Desert Rebels Cole’s job is to protect his MC. As a favor to a friend they take in a young woman who they think is trying to escape a crazy ex. But she’s lying. When the truth comes out, so does trouble to the club. Cole wants Raven, but will their explosive attraction to one another be enough to overcome the deception, and give them both a chance at happiness?