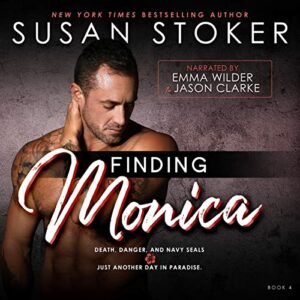 Years of abuse at the hands of her father has taught Monica Collins she can’t trust anyone – especially military men. Since escaping her home, she’s built a successful career as a nanny, showing other kids the love she was denied as a child. But when her employer’s ambassadorial home becomes fair game for intruders during a riot, she’s forced to rely on two SEALs to get her to safety. Basically her worst nightmare come to life.

Stuart “Pid” Hall is used to people being scared, panicked, and confused during a rescue mission, but Monica’s deep animosity and distrust is a surprise…until she shares a bit of her story. He can’t blame her for hating all things military – or for being outraged when his commander demands the SEAL team escort her back to Hawaii. Turns out the ambassador’s home was specifically targeted, and Monica’s the only person who’s faced the intruder and lived.

No one is prepared to learn the man has ties to the Navy. When he decides to use Monica as a pawn for his revenge, she’ll have to overcome years of deep-seated fear…and put her trust in Stuart’s hands if she hopes to see another day.

Finding Monica is the fourth book in the SEAL Team Hawaii series. Each book is a stand-alone, with no cliff-hanger endings.