First You Dream by Aliyah Burke 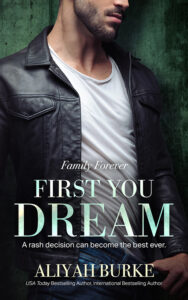 A rash decision can become the best ever.

Race car driver Cody Gamino has come from Europe to the United States for one thing—to race with the incredible Xin. Their one night together meant more to him than he expected and suddenly, it’s not just about racing together but being together. Forever.

Racer N’Jelle ‘Xin’ Marx turns to a handsome man she met outside a bar, just to forget for a night. Six weeks and two pink lines later, she is questioning the decision she made that night. When he shows up at her job, revealing to her who he truly is, and snatches her position out from under her, she doesn’t have the fight in her any longer. And Cody isn’t one to give up—when he learns of his unborn child, he digs in even more. Will these two, used to life in the fast lane, learn to slow down and see what’s before them? Will they recognize what they have to lose?

Reader advisory: This book contains a brief mention of violence/murder.

The man who asked stared at her as if she were familiar to him and she barely resisted tensing up. She didn’t need to be recognized.

N’Jelle ‘Xin’ Marx craved nothing more than a good hard drink. At least if I can have that I’ll be on my way to forgetting this shitstorm of a day.

The bartender nodded and had her requested items before her in mere moments. Blessedly, he then left her alone.

The first shot went down smooth and potent. Before the burn had even evaporated, she was pouring another, and chasing it down.

Warning prickles popped up along the back of her neck. That awareness came in handy while she drove on the track. Right now? Not so much.

“At least you drink whiskey like a decent human, no froo-froo shit for you.”

The slender woman that parked herself on the stool beside Xin looked not all that different from how she’d been earlier that day. N’Jelle sighed, not bothering to keep it quiet either. The other two were there as well.

She didn’t owe them a damn thing and she was irritated as fuck that they’d tracked her down.

Ignoring all three of them, she remained sitting faced forward and poured more liquid into her glass.

“Does she think we’ll just vanish if she doesn’t talk to us?”

The tallest and roughest of them had spoken this time. Not rough in an ugly way but more of an ‘I can kick your ass and look good doing it’ sort of way.

“She’s,” N’Jelle sneered, “sitting right here and doesn’t give a damn what you think I may or may not think. I’ve had enough of you today.”

“Tough shit.” The middle-sized one spoke now. She was the one who actually shared a father with N’Jelle. Xandra was her name. “You’re my sister now and I don’t know what the fuck you were thinking, that you could just roll up at our event, drop that kind of bomb and walk off.”

Turning her gaze to the beauty beside her, Xin snarled. “You what, want me to apologize for not being invited to a family event and getting permission to show up? I don’t want anything from any of you. I had wanted to know why your father couldn’t be bothered with me, but I get it now. He has you and the other two he looks on as daughters—who gives a fuck about the one who was left behind and forgotten.”

Her shitty childhood was shoving at her, pushing for her to lose it and make a scene. Draw some blood.

This wasn’t smart—she had to get moving. Getting off the stool, she dug in her pocket for some bills. She tossed them on the bar top and nodded at the bartender. Then she spun to the door.

All three women stepped in front of her, and she snorted.

“Really? Grew up on the streets, bitches. Don’t push me. Get out of my way or you’re going to lose your weaves.”

Shoving through them, she walked out through the door and stepped into the night. Off in the distance, storm clouds rolled in, and she pinched the bridge of her nose. She requested a ride and kept an eye on the door as she waited. The three women walked out as her ride pulled up.

A leanly muscled man walked up to her from a different direction, his hat pulled down over his eyes.

“Where you off to, beautiful?”

He held the car door for her and she got in, ignoring the calls from her half-sister and cousins. She wasn’t their concern. Hadn’t been before. Wasn’t now.

She needed to forget and this man, dressed in black jeans and a tight black shirt, with scruff on his face, seemed the perfect way to go about it.

The Price of Forgiveness by ML Nystrom

The Archer Series By Heidi McLaughlin