Foundations and Fahrenheit by Leigh Lennon 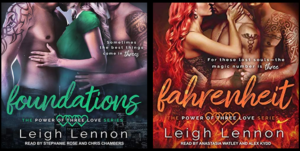 My career took focus in my life while trying to make a name for myself in a male dominated field. I kept my gender under wraps until I was able to let my expertise speak for itself. But I was knocked off my axis when I ran into Arden, the man I had compared all men to since our one night together. Now he was taken—by another man—a very dominant man.

The love I had for my man ran deep. But I’d never forgotten her. From the very beginning, Daimen and I agreed to our non-traditional life—two men loving one another until we found that woman we could claim as ours. Now, she was standing in front of me, unaware she was a marked woman.

I had loved my best friend from an early age. The day Arden submitted to me, was a dream come true. That was until a sexy and sassy blonde entered our life and turned it upside down. I see something in her that scared me. But I would make her mine, mine and Arden’s. Claiming hatred would follow us everywhere, Elliot fought us at every turn.

Will the three of us create our own unconventional happily ever after or will she leave us heartbroken?

I never had a home until I was an adult, living in foster care as a kid. Now, I have a family, one I chose for me. But I’d always longed for a man I could call my forever. Instead, I found two, and they both want me. So how do I choose between them?

I found the woman I want for life and she’s in love with me. But she also loves another man. When he comes to me and proposes sharing her, I am shocked. I don’t share. But what if she doesn’t choose me over him? And why is it every time he looks at me, I long for him almost as much as I do her?

I can’t choose between him and her so why not have them both? He’s not interested in me, but I’d rather have them together than not have them at all. They are both mine, he just doesn’t know it yet.

Leigh Lennon is a mother, veteran and a wife of a cancer survivor. Originally with a degree in education, she started writing as an outlet that has led to a deep passion. She lugs her computer with her as she crafts her next story. Her imaginary friends become real on her pages as she creates a world for them. She loves pretty nails, spikey hair and large earrings. Leigh can be found drinking coffee or wine, depending on the time of the day.

A Dash of Christmas by Samantha Chase