Ghosts of You / Drake Isle Series by Allie Boniface 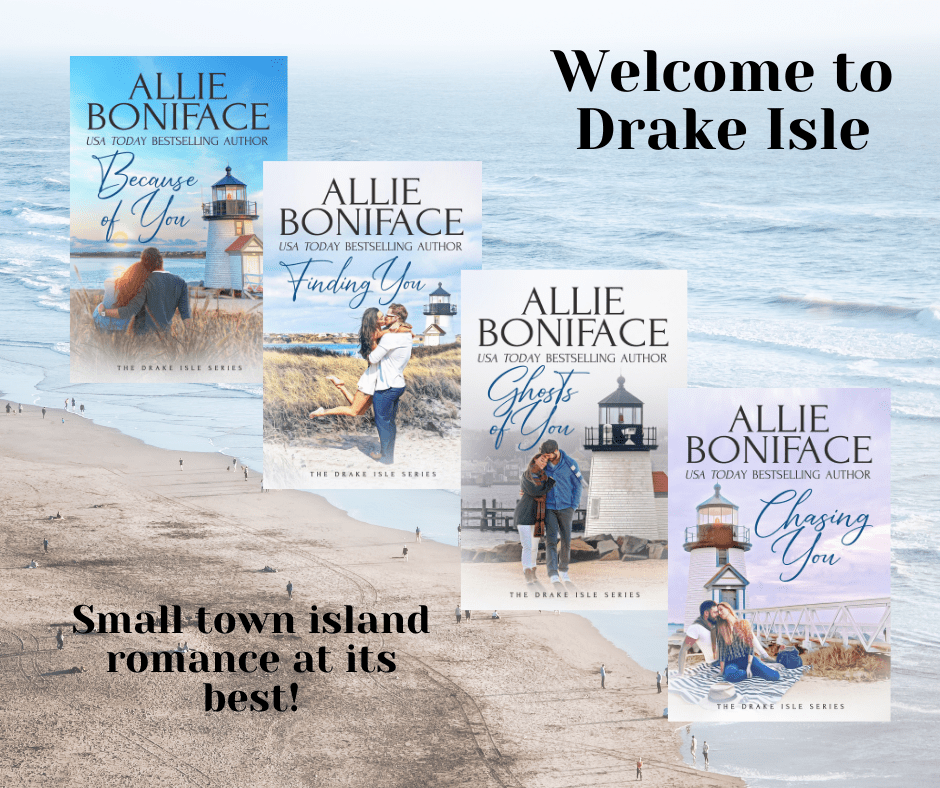 Quinn’s world shattered when his college girlfriend fell to her death. Will returning to Drake Isle help him find closure or raise unanswered questions about the night she died?

Quinn Nolan lives a solitary life outside Chicago, working as a contractor and moonlighting as a ghost hunter. When he hears about the haunting of the Delta Eta Chi fraternity house, he decides to return to Drake Isle to try and make contact with the woman he’s never gotten over.

Local science teacher Polly Parker has heard all the stories of Drake Isle’s haunted house, and she spends her days trying to explain away the ghostly sights and sounds. But her efforts are complicated by the return of Piper’s gorgeous college boyfriend, who turns Polly’s world upside down.

As the theories grow and the ghostly sightings multiply, Quinn and Polly find themselves drawn to each other despite their opposing beliefs. When a night in the Delta house turns sinister, can they put aside their differences to save each other? Or will the secrets of Piper’s death reach beyond the grave and prevent them from ever finding happiness?

If you like small-town romance, unsolved mysteries, and second chances, then you’ll love the next book in the emotional Drake Isle series.

Polly prided herself on her composure – she was a killer chess player, and she’d won her fair share of poker games – but her mouth fell open the minute he walked through the door.

A dimple in his right cheek, which popped as he looked from Emmy to her daughter.

A rich baritone voice that filled the salon, and muscles that filled his heavy winter coat. She could tell, even underneath all the layers, the guy was built. He said something to Emmy and the others, and all she could do was stand there and stare.

Get a grip, Pol. He’s just a mainlander. But he looked like he might be a model too, and he was obviously a friend of Emmy’s from way back, because she heard snippets of conversation like the fraternity house and remember when and how many shots did we do that night?

Finally Mr. Gorgeous looked her way. Please let him be straight, she thought insanely. Mason would kill her for that wish, but she’d been here and single on this island longer than he had. She deserved some good karma. “Hi,” she managed. She gave a little wave. “I’m Polly.”

The smile started at his mouth – a perfect mouth, framed by that one dimple and smooth skin and lips she wanted to taste – and moved up to his eyes. “Hello. Name’s Quinn.”

Of course it was. A strong, one-syllable, unusual, attractive, masculine name. Before she could help herself, she stole a quick look at his left hand. No wedding ring. No faded tan line that looked like a ring might have recently occupied the space, either.

“Are you…” She looked at Emmy. “You know each other from college?”

“Quinn was a Delta brother. Same graduating year as me and Blake. We all spent a lot of time together.” Emmy handed off Hope to Tilly and made her way back to Lil’s chair. “Haven’t seen him since then.” She gave him a look Polly couldn’t quite decipher, filled with sadness and resignation and frustration, too. “We missed you,” Emmy added. “The guys’ll be glad to see you again.”

“Not sure how long I’m staying.” He looked back at Polly, and sizzles of attraction went up and down her spine.

There’s something here. I can feel it. And just in time for Christmas. What a delicious present this man would be. She jammed her hands into her pockets and tried to look casual, indifferent. As if her pulse hadn’t sped up the minute Quinn stepped inside Lillian’s Lovelies.

“You must remember how beautiful Drake Isle is at Christmas time,” Polly said. “They haven’t even put up all the trees around town yet. I know the Garden Club has something special planned this year. That’s what Maisie said last week, anyway. You should stay a while.” Oh my God stop talking. You sound like a blithering idiot. Like an ad for the Chamber of Commerce.

But he smiled. “I do remember. It looks like everyone’s been busy decorating every square inch of the harbor.”

“Where do you live now?” Polly asked.

“Chicago. I’m a contractor.” He started to say something else and then stopped.

“Are you back because of what’s going on at the Delta house?” Emmy asked. “I’ll tell you what, I haven’t seen or heard anything and I teach a yoga class at the Phys Ed Center twice a week. People say most of the hauntings are happening at night, anyway. I guess ghosts don’t come out in broad daylight. Hope, stop bothering the nice man,” she added. The little girl was tugging on Quinn’s pant leg, as if even she wanted to vy for the gorgeous man’s attention.

“She’s not bothering me. Christ, she looks so much like you, Em.”

“I know. Blake says he’d worry she was the mailman’s daughter except she has his stubbornness and OCD.”

“Even at this age?” Tilly asked.

“Even at this age. Sometimes I knock down her perfect block towers just so she knows it’s okay if things fall apart.”

Emmy smiled again. “Oh, he’s mellowed a little since marrying me. I make him meditate every morning before he goes to work. He hates it.”

Lil laughed as she combed out Emmy’s hair and laid her back over the sink. “I don’t think Blake hates anything about you.”

“Never did,” Quinn said. “He was caught by the balls the minute he met you.”He looked down at Hope and clapped one hand over his mouth. “Sorry,” he said, the word muffled. He crouched down. “You should’ve seen your mom and dad when they first met, little one. Like fireworks.”

Polly watched his face change with nostalgia and wondered if he’d felt fireworks back then too. If he’d had a college girlfriend that took his breath away. Maybe that college girlfriend had turned into his wife and the mother of his kids, even. He might not be wearing a wedding ring, and he might be alone right now, but that didn’t mean he wasn’t spoken for.

“You didn’t answer my question.” Emmy said as she sat back up, her har wet and dripping. “What brings you back to the island?”

He cleared his throat and ran one hand over his head. “I did hear about the Delta house, actually. A buddy of mine mentioned his wife saw it on TV. Shit, I hadn’t even heard, but…” His voice faded, caught, as something in his expression changed. “I do a little paranormal investigating on the side. Thought I might check it out.”

“No.” Paranormal investigating? Polly closed her eyes in disappointment. All her hope and attraction fled. “Please tell me you’re not one of those.”

She opened her eyes again. He stared down at her, cool and composed. She waited, but apparently he was waiting for her to spell it out. “A ghost hunter. Or ghost chaser, or ghost maker-up-out-of-thin-air. One of those people who carries around an infrared camera and a tape recorder and thinks every bump in the night and every hot spot in a old building means something spooky lives there.” She wiggled her fingers in the air at the word spooky.

But that admission just made things worse. Once this guy had been in possession of a brain, but now he subscribed to rumors and ghost stories the way half the islanders did. She wondered what had turned him.

“Polly’s a science teacher up at the high school,” Emmy added, as if to explain. “She believes in facts and proof and things like that.”

“There’s nothing wrong with facts. Or science. Or things that can be measured through experiment and proven and seen and touched.” She felt her face redden, felt herself get worked up the way she always did. She couldn’t help it. Science ran in her veins. She’d been born and raised in a household where no other beliefs were acceptable. Even a gorgeous, model-worthy guy like Quinn couldn’t flip a switch and change her.

He blinked, his long lashes framing deep blue eyes, and when she finished he only said, “You’re right. There’s nothing wrong with facts. Except they don’t explain everything, and I bet if you took half a minute to suspend your disbelief, you might be surprised to learn a thing or two.”

Early Praise for Ghosts of You:

“Eerie enough to get under the skin and poignant enough to leave more than a few marks on the heart. Haunting tragedy, unexplained occurrences and an intriguing mystery serve as the backdrop to a breathtaking romance.”

“I forget when I haven’t read one of Allie Boniface’s stories in a while just how utterly charming they are.”

“So amazing, I couldn’t put it down and read in the same day!”

Read the other books in the series:

Book One, Because of You
Ten years ago, Piper Townsend fell to her death from the top of a fraternity house, and no one on Drake Isle has ever been the same.

Blake Carter’s fraternity was scandalized. Misterion College closed down altogether. And Blake’s girlfriend, Emerson Doyle, fled the island after her best friend died and never looked behind her.

Blake’s the CEO of a multi-million dollar tech firm looking to relocate to the island. Emerson owns a yoga studio in the building he wants to buy. They haven’t spoken in ten years. They’re on opposite sides of the bargaining table.

And the more Blake and Emerson fight both the past and each other, the more they realize that coming to terms with tragedy is their only chance of finding love again… 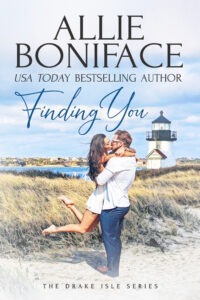 When Piper Townsend fell to her death twelve years ago, she took Trey’s secrets with her. He’s never trusted another woman. Until now.

Lillian arrived on Drake Isle twenty years ago pregnant, broke and alone. Since then she’s raised twins and opened a renowned beauty salon. Fiercely independent, she has no interest in settling down. Then she meets Trey.

Trey lives a jet-set lifestyle on the mainland, a billionaire who’s hidden a shockingly abusive childhood from the world. His best friend, the only woman who knew his secrets, died in a tragic accident twelve years earlier. Since then he’s mastered the art of carefree living, with little emotion and no commitment.

Their attraction is instant. Their desire is powerful. But when Trey’s former life catches up with him, it threatens to destroy everything they’ve built together. Can two people from different worlds find love on Drake Isle, or will past secrets tear them apart for good? 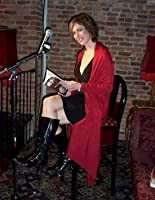 About Allie:
Allie Boniface is the USA Today best-selling author of over a dozen novels, including the Cocktail Cruise, Hometown Heroes, and Whispering Pines series. She loves writing about small towns, second chances, and all the feels that come with falling in love.

Allie currently lives with her husband in a small town in the beautiful Hudson Valley of New York. When she isn’t teaching high school English or eating chocolate, she likes to travel, visit the local animal shelter and love on the kitties, or go for a run and think about her next small town story. Join her newsletter mailing list for a free novella, Angle Shot, available exclusively to  subscribers!