Going The Distance by Alexandra Alan 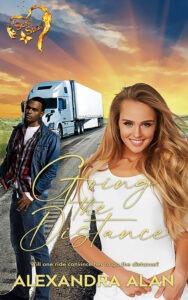 Will one ride convince her to go the distance?

Hitchhiking is easy, right? Stick out a thumb, hop in an old jalopy and see the country from behind someone else’s bug-splattered window. But even hitching from Boston to Los Angeles was a lot trickier than Cara had imagined.

Cara never expected to hitch a ride in a vehicle larger than a minivan, yet when Nate Hayes offers her a lift, something urges her to leap into the passenger seat. He’s handsome and taciturn, and she’s sure there’s more depth to this man than he initially reveals.

On the road from one side of the country to the other, her intrigue quickly turns into attraction, then into something she really doesn’t want to feel for a man who’s going to disappear in less than a week.

As Cara’s destination looms, she realizes that she wants to go the distance with Nate…but will it be possible?

Reader advisory: This book contains references to infidelity, overwork leading to serious mental health problems, and corporate corruption. There are mentions of parental abandonment and a scene involving semi-public sex.

This isn’t a great idea.

It’s not that it’s bad, really. It wasn’t brought about by too much alcohol or having a friend say, “I’m not peer-pressuring you…it’s just your turn.” Nothing she’s currently doing will end with an underground drug ring in Singapore, missing half of her finger, or a tattoo of Twerkalicious in a swirling script stamped over her ass.

Still though, it’s not great. Cara will admit this.

There’s inherent risk to hitchhiking, especially hitchhiking across the country. Cara, however, has been supremely safe the entire time, and although it’s only been one day—during which she’s hopped into two sedans and an old pickup, and crossed the distance from Boston to Pittsburgh—there hasn’t been a single moment she’s feared for her life.

Not yet, a little voice says in her head.

Cara shuts it up by beginning to loudly hum More Than a Feeling and smiles at a Subaru that passes without even a wave.

She’s been standing on the side of the road for over an hour with both her thumb and her smile out so hard that it’s making her muscles ache. Maybe if a driver sees a happy hitchhiker, they won’t think she’s planning to murder them. Her friends say she has a nice smile, that it brings out the apples in her cheeks—whatever the fuck that means.

A scrappy-looking sedan with only one side mirror flies past.

It crosses Cara’s mind then that perhaps her grin could be taken as a sneaky attempt to con someone into giving her a ride so she could then murder them. She lowers the wattage of it and tries not to feel the encroaching despair when a lifted truck blasts its engine as it passes her.

Last year, she’d listened to an audiobook about hitchhiking across the country. It had planted a little seed in her mind—she could do that. She could hold out her thumb, hop in a vehicle and see the country from someone else’s passenger-side window. After many trips to the library and a few memoirs filled with grand soliloquies and out-of-date gas prices, the plan had solidified.

She would do it.

In her back pocket, her phone buzzes and she pulls it out. There’s a new message in the group chat she’d started with her friends.

Get a ride yet?

Cara taps out a quick response in the negative. A minivan seems to slow and she shoves her phone into her jeans, jerking her arm out and even going so far as to waggle her thumb, because maybe they’d have air conditioning, and snacks, but the van continues on down the ramp and returns to the freeway.

She should have made a sign. Wasn’t that what everyone in the memoirs had done? If she’d scrounged a scrap of cardboard and written out Boston to L.A., maybe more people would have stopped. She’s done everything else right—hitching for rides on freeway on-ramps, staying clean so as to not look like a transient, taking pictures of the license plates of each car she gets in and texting the photo to the group chat before she slides into the passenger seat. She’s even carrying one of those neat GPS things that sends her location to a handful of email addresses. And she’s been taking self-defense classes for the past three months.

The same can’t be said for the drivers of Pennsylvania, apparently.

With a sigh, she lets her arm drop to her side and walks to where she’s set her pack against a tree, then crouches and pulls her water bottle from the elasticized side pouch. The air is hot and muggy against her exposed skin, and it’s not even noon yet. Her hair is in a loose, low ponytail, and it’s clinging to her neck like some sort of little blonde octopus. She’ll fix it in a minute.

Cara takes a long drink and pretends she was able to find ice cubes this morning. They would rattle against the plastic and bump against her teeth, and maybe one would slip between her lips and she could suck on it, and she would feel the cold through the roof of her mouth until she winced.

She takes another drink and, this time, pretends the water doesn’t taste like old rest-stop plumbing and chlorine.

From the on-ramp intersection, there comes the sound of a semi. Cara spins around to see it make the wide turn onto the on-ramp. Hurling her water bottle to the grass, she sprints to the side of the road and holds out her thumb. The cab’s silver paint is chipped and fading, and Hayes Moving is printed in a retro script on the side of the trailer. The engine roars and a thick plume of black smoke belches from the pipe.

Cara hates that black smoke. She hates the whole idea of semis, especially since she read an article about how much less efficient they are than trains, and every single time she’s been tailgated for going the speed limit, it’s been by a semi.

But she’s hot, desperate, and more than a little frustrated, so she holds her thumb out anyway and smiles.

As the smoking behemoth rumbles past her, the horn blasts a few times and the engine brake lets out a sound that, if she were feeling vindictive, she would call a fart. The whole thing pulls onto the shoulder.

Cara stands in the grass for a second, hand still outstretched in disbelief, before she runs to her pack and hefts it onto her shoulder with a grunt. Since she hadn’t planned on doing much walking, she hadn’t worried about packing light when she’d shoved her gear into it, and the pack must be close to fifty pounds.

A quick photo of the license plate and she begins to walk toward the cab.

This could be great.

The group chat is still an active window. She navigates to it, uploads the picture and taps Send.

This could be great. Or it could be terrible.

Alexandra lives in Colorado with her partner and two very strange cats. Her nerdiest experience was when she had a heated discussion about Star Wars during a game of Dungeons & Dragons. Though she’s always on the lookout for more hobbies, some of her favorites are drawing, knitting, archery, rock climbing, brewing mead, and scrimshaw. The most badass she has ever felt was when she took jousting lessons for a year. She has never met a bad pun she hasn’t adored, and loves to read books that make her heart race. Follow Alexandra on Twitter.

ALEXANDRA ALAN IS GIVING AWAY THIS FABULOUS PRIZE TO ONE LUCKY WINNER. ENTER HERE FOR YOUR CHANCE TO WIN A LOVELY GIFT PACKAGE AND GET A FIRST FOR ROMANCE GIFT CARD! Notice: This competition ends on 16th March 2021 at 5pm GMT. Competition hosted by Totally Entwined Group.