His True Heart by Samantha Cayto 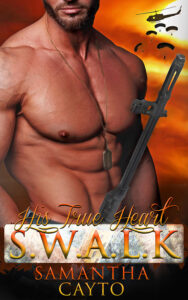 The heart always knows the way.

Chris Novak is adjusting to his lieutenant being the first openly gay SEAL. Seeing the man’s obvious love for his husband gives Chris ideas—ones he has ruthlessly suppressed his whole life. Becoming a SEAL was his dream. Having the love and approval of his father remains critical to him. Acknowledging his sexual orientation would have jeopardized both. While the military has evolved, Chris fears that his father’s views have not.

Tanner Pac has been openly out and proud since high school, with his family embracing him as he is. He knows being gay is not a problem, but his dream of becoming a software engineer is. His parents expect him to carry on the family business of running a pizza parlor. He dares not disappoint them, fearing a loss that would crush him.

While visiting his father on leave, Chris goes out for pizza, not expecting to run into his old girlfriend’s annoying little brother. They could never ditch Tanner and now that he is all grown up, Chris finds he no longer wants to. Facing the strong temptation that Tanner presents is causing Chris to also face the truth about himself.

As Chris and Tanner struggle to meet their parents’ expectations, their attraction for each other cannot be denied. Their strength and courage grow in each other’s arms, but it may not be enough to break free of the weight of family expectations.

“Man, the way the lieutenant’s reunion is going, I’m not sure they’ll make it home. Know what I mean?”

Petty Officer First Class Christopher Novak did indeed know what his teammate meant. Scott Carpenter’s husband had jumped into his arms the second he’d seen Scott coming through the gates. At the moment, the guy’s legs were wrapped around Scott’s waist, and the two of them were going to pass out from lack of oxygen if that kiss didn’t end soon.

“Yeah, but we shouldn’t be staring. It’s not like they’re animals in a zoo.”

His teammate, Diego, had no filter. “I hear you, only it’s like…when have you ever seen a SEAL kiss another man? It’s a first for me.”

Chris slung his duffel bag over his shoulder. “It’s a first for everyone, and Scott’s already on the receiving end of some nasty reactions. We don’t need to add to them.” He walked away, breaking his gaze from the sight. He hadn’t been able to make the wedding the previous summer, so this was the first time he’d seen Scott in such an obviously sexual way with his husband. He couldn’t bear to watch, not because it disgusted him but because it was compelling in a way that disturbed him.

Diego stepped up to his side. “Wanna grab a drink? I’d like to find some female company myself, and I hear The Anchor has added a new heat level to their wings.”

Chris shook his head. “Sorry… I’ve got laundry to do, then hitting the rack. I have an early flight to Detroit in the morning.”

Diego groaned. “Seriously? Why are you so keen on freezing your balls off after what we just went through? I need a few days in the sun to thaw out.”

“I’m overdue visiting my father. If you think you can convince him to move away from his hometown, his extended family and the proximity of my mother’s grave and come to San Diego, have at it.” There was more bite to his words than he’d intended. Visiting his father always triggered conflicting feelings in him. Obviously, he loved the man, but the strain of meeting his expectations was beginning to wear on him.

Chris flashed him a smile. “It’s fine. I know you were. I’m tired, that’s all. Have fun tonight, and I expect a full report on how it goes with both the wings and the women.”

He peeled off when they reached his truck. As he tossed in his duffel and slid behind the wheel, he reminded himself that spending his leave with his father was a good thing. They would talk shop, as much as legally permitted, watch sports and pretend that everything was great—because it was, damn it all. There was no reason to believe otherwise. And yet, the vision of Scott devouring his husband’s mouth in front of God and everyone stuck in his mind, no matter how hard he tried to shake it away.

She lives a typical suburban life with her husband, three kids and four dogs. Her children don’t understand why they can’t read what she writes, but her husband is always willing to lend her a hand—and anything else—when she needs to choreograph a scene.