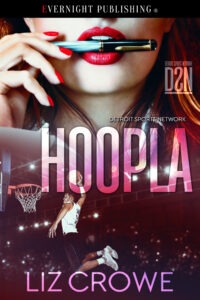 The last thing LeeAnn Thompson wanted to do was interview Detroit’s hot new basketball phenom. She didn’t like wasting time on cocky, flirty, annoying athletes and this one promised to be more of the same. But when she has to cover for one of her employees at DSN,  she meets him, and falls hard, although she knows better than to take her sudden obsession with Jax Hoople seriously. He’s too young for her, for starters. And she has her own goals, none of which include a relationship–although getting laid might be nice.

Jax is a Michigan boy through and through. When he demands that his agent get him a spot on the flailing Detroit pro basketball team so he doesn’t have to leave the grandparents who raised him behind, the sports world is shocked. His intro to the team is tough, and he’s not settling in well when a lovely, red-headed goddess walks into his life via a “quick interview” after team practice.

Amazon best-selling author, mom of three, Realtor, beer blogger, brewery marketing expert, and soccer fan, Liz Crowe is a Kentucky native and graduate of the University of Louisville currently living in Ann Arbor. She has decades of experience in sales and fund raising, plus an eight-year stint as a three-continent, ex-pat trailing spouse.

Her early forays into the publishing world led to a groundbreaking fiction subgenre, “Romance for Real Life,” which has gained thousands of fans and followers interested less in the “HEA” and more in the “WHA” (“What Happens After?”).

With stories set in the not-so-common worlds of breweries, on the soccer pitch, in successful real estate offices and at times in exotic locales like Istanbul, Turkey, her books are unique and told with a fresh voice. The Liz Crowe backlist has something for any reader seeking complex storylines with humor and complete casts of characters that will delight, frustrate and linger in the imagination long after the book is finished.