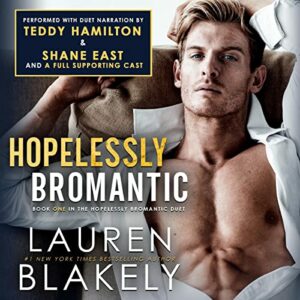 An irresistibly sexy, emotionally charged MM romance between a broody American and a charming Brit, from number one NYT best seller Lauren Blakely and performed with duet narration by Teddy Hamilton and Shane East!

Look, when I met the sexy, witty Brit on the streets of London last night, I had no idea who he was. He was just that hot guy I wanted to have a drink with, so I asked him out for my first evening in town. One thing almost led to another. After a midnight kiss, we made plans for a whole lot more the next day.

But when I unlock the door to my rental in the morning, the English hottie is lounging on the couch like he lives here too. Great. For the next year, I’ll be sharing a tiny flat with the sexiest guy I’ve ever known.

Time for a few simple rules—don’t walk around the flat wearing only a towel, don’t spend our nights together exploring London, and don’t crack open my secrets for him. Even as I smash all those rules, I try to resist falling for the cocky charmer. But after a taste of his lips, I give all the way in, telling myself one night, and we won’t fall in love.

Too bad in the morning, I discover that hiding my true feelings is the least of my worries, compared to a twist I never see coming.