We’re heading deep behind enemy lines with heroes from the wrong side of the track. Whether they’re bikers or mob bosses, they know how to get what they want, and it’s not often anyone disobeys their commands. Find out what happens when they’re challenged by an enemy, or when that burning animosity starts to turn to desire. 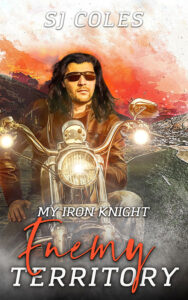 Dash Cassidy loves his town even more than his bike, but his priorities have a violent shift in gear when an irresistible Russian hitman comes along.

Darius ‘Dash’ Cassidy has ended up president of the small town of Salvation’s Iron Knights motorcycle gang, almost by accident. His sister, Zara, is the more business-savvy and ambitious of the two, but their father—the infamous Butch Cassidy—was far from politically correct, so Dash was left in charge.

Up to now, Dash has been more than happy to muscle his way through life as his father did before him, even if he is starting to suspect that something might be missing.

But now there’s a new player in town. Iris Damaro has plans to make Salvation the center of her international smuggling operation. Dash isn’t going to sit still while Damaro steamrolls through his town, but when the crime boss sends her alluring Russian number two, Nikita Vasiliev, to do her negotiating, Dash realizes he may be in over his head.

Can Dash figure out where his priorities lie before his town—or his heart—is lost forever?

Reader advisory: This book contains scenes of violence, trafficking, and a scene of public sex. 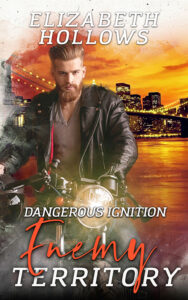 Sleeping with the enemy is bad enough, but now they’re adding bondage and domination. How can they trust a person they’re supposed to want dead?

Rico Hanthorn is a member of the Angels of Mercy bike club. His father is the leader and groomed him from a young age to join them. Rico has been an enforcer for years. When rivals encroach on their territory, he is sent to deal with them. He knows his enemies—if not by name, then by face.

And there’s one enemy he knows better than most, thanks to a stupid mistake in his youth. Rico has endeavored to forget about it, something only helped by his most recent task of keeping an eye on his younger sister. Angelica is rebelling, and his father wants her kept in line. He’s a glorified babysitter, but his father’s word is law.

Across the city, Pearce Walton is one of the Demon Riders, the rival gang which, despite being smaller, has grappled with the Angels for decades. Raised by his uncle since he was four, Pearce lives and breathes the club’s culture. He’s only ever had one cause for regret, and he has spent years hiding and learning from that mistake. No one knows his secrets, especially his cousin Benny, whom Pearce has been tasked with monitoring to make certain he’ll be ready for initiation.

But when Pearce finds Benny entangled in an affair with Angelica, both Pearce and Rico are forced to face their past head-on. Rico and Pearce are gay men in straight biker clubs, as well as rivals and enemies—but for a few days more than ten years ago, they had been lovers.

J. Coles is a Romance writer originally from Shropshire, UK. She has been writing stories for as long as she has been able to read them. Her biggest passion is exploring narratives through character relationships.

She finds writing LGBT/paranormal romance provides many unique and fulfilling opportunities to explore many (often neglected or under-represented) aspects of human experience, expectation, emotion and sexuality.

Elizabeth Hollows is an Australian writer of LGBT love stories specializing in homosexual or lesbian romance.

Her preferred genres are fantasy, science fiction, and contemporary/modern.

She has been writing since she was twelve but has spent the last few years writing romance stories and discovering a passion for LGBT romance.

When Elizabeth is not writing she embroiders, reads and plots her next novel. She is a fan of the winter months and always has a book in her handbag and a cup of tea nearby.

You can find Elizabeth at her website here – https://www.elizabethsromances.com/