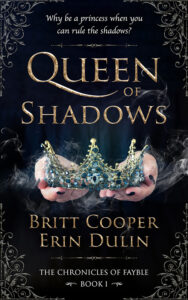 Why be a princess when you can rule the shadows?

Rejecting the senseless demands of her wicked stepmother, Ella of Locksley shares her family’s abundance with the people of her land. Yet, the desperation of her community has only begun.

When the nation of Llundyn is brutally attacked, Princes Ric and Johan begin to fight for their right to rule, leaving the kingdom’s very heart to hang in the balance as subversive forces emerge. Taxation drives the citizenry toward hopelessness, with the absence of leadership taking its toll.

Striking out on her own, Ella takes up the nation’s cause, making a name for herself as the infamous Hood, and leads her cunning crew, stealing from the rich to provide for the poor. But the return of the rightful heir, along with a forbidden romance, changes everything—with artifice and betrayal leading to an unlikely alliance that unites prince and thieves.

The passion and true love of a king leave Ella torn between duty and loyalty when, at the stroke of midnight, her identity is exposed. She’ll face the ultimate choice—enduring as the Hood or sacrificing it all for the ones she loves.

Reader advisory: This book contains some scenes of violence, a maiming and a death.

Fitful cries from the Carvers’ infant son pierced the silence, cleaving away Ella’s remaining shreds of calm. Trekking through the village was a dubious task on the most temperate of evenings. Doing so in the biting gales of waning wintertide was sheer idiocy, but she had little choice.

Ella tugged the hood of her cloak, attempting to keep it in place atop her head. The wind swirling around her had other ideas, whipping her mantle with vicious ferocity and nearly knocking her onto her backside as she crouched beneath a narrow window. She gripped the rotting sill, cursing under her breath before digging her heels into the frozen earth.

“Be grateful.” Much met her gaze, his eyes alight with suppressed mirth as he observed her predicament. “The weather should provide us a little more time.”

It was true. Ella glanced skyward, where the silvery haze lingering above conveniently veiled the moonlight. “Would that it could also grant us more provisions to share,” she whispered as Much tossed a small bag of grain in her direction. She wedged it neatly between the pile of cordwood and the decaying shingles sheathing the exterior, the burlap sack catching on the splintered timbers of the ramshackle cottage. “Another?” She held out a gloved palm expectantly.

“We cannot spare it.” Much’s words were but a breath, born both of necessity as well as grief. “If we double their portion, we’ll leave another family with nothing.”

Ella rose, making her way toward Much with a muted stride. “I filched an extra sack of grain from the lovely Lady Margaret before we set out.” She loosed the pouch from her horse, Monroe, with nimble fingers. “The Carvers will put it to far better use. They have five children now, you know.”

“Indeed.” Much folded his arms across his chest for warmth. “But Lady Margaret is apt to skin you alive if she catches you.”

“Tosh.” Ella waved his concern away with a dramatic sweep of her hand. “My stepmother would never sully herself over the likes of me. Doubtless, she’ll task you with that burden in her stead.” She grinned, waggling her eyebrows in amusement.

Much groaned. “You are as delightfully morbid as ever.”

Ella ignored him as she scurried toward the shanty for a second time, pairing the modest sack of grain with its twin nestled beside the kindling. The bags were always well hidden from passersby so as not to be stolen but quickly found by the tenants seeking firewood for their hearth. “It shouldn’t make any difference,” she groused, mounting her horse as Much followed suit. “It all belongs to me.”

“Ah, if only, Lady Locksley. It shall be yet another two years, for until the age of—”

“Twenty, I know. I know.” Ella sighed. It was an inconvenient fact she wished desperately to change. Thus far, her finest efforts in evading the ill-conceived lineal law of Llundyn included skulking through her hamlet in the wee hours before dawn, distributing food from her manor.

In the simplest of terms, she was stealing from herself, though with great care so as not to be discovered by her insufferable stepmother—the rightful heir of her lands and fortunes until she was finally of age.

Ella was discreet in her thieving endeavors, pinching items that would not be missed. It didn’t hurt that Cooke willingly turned a blind eye. And, as luck would have it, Lady Margaret wasn’t much for kitchen duty. It was a task she viewed as too menial for a woman of her stratum, even if she had only managed to achieve her status via a wholly undeserved union with Ella’s father.

Heavens, how she missed him, God rest his soul.

“Where’s the good in my title if I’m unable to use my station? I’m a member of the gentry with no more authority than that of an entitled rat.” Ella urged her mount toward their next destination, gritting her teeth against the brisk air as her horse picked up speed. Plucking an arrow from the quiver on her shoulder, she turned, aiming at the weather-worn door behind her, her drawn bow taut. Her bolt found its mark, despite Monroe’s bounding gait, announcing the presence of a delivery—the handmade arrow a telltale sign of her brief visit.

Much scoffed. “Nonsense. A rat would never share the spoils of its domain as you have. Neither would it have your impeccable aim.”

Ella glanced at Much, expecting to see him smiling as he often did when he teased her, but his handsome face was surprisingly austere.

No. There was no humor to be found in these circumstances.

Two years of poor, drought-riddled harvests had taken their toll on the kingdom of Llundyn. The dearth of crops had failed to significantly affect the nobility, of course, with many a lord and lady inclined to take advantage of the bountiful imports from neighboring realms. But the paltry yield was nothing short of devastating for the commoners who had little coin to spare. Many had begun to exhibit its brutality outwardly, the sharp planes of their faces and bone-thin frames a startling illustration of the land’s insufficiency.

Yet wealth poured into Locksley in the form of generous taxes, collected by Lady Margaret from the tenants surrounding the estate. As residents of the Locksley lands, they paid their due and worked the countryside in addition to their regular employment in the borough of Coventry, some five miles south of the manor.

Shame grieved Ella’s conscience as she observed the growing disparity, convicting her of something far worse than her newly established hobby of larceny.

Attempting to shed her sense of guilt was worthless. It merely required action. Thievery paled in comparison to the atrocity of starvation and poverty. And, as far as Ella was concerned, it wasn’t truly theft if she were merely pilfering from herself.

Much’s eagerness to be complicit in her scheming had been all the sanction she’d needed. She’d considered him the more reasonable of the two of them for as long as she’d known him. If he could rationalize the madness in her subterfuge…well, then perhaps it wasn’t madness at all.

As an orphan of some four years now, Much was far from his natural element. His father had been a man of the sea, captain of the king’s navy, his young son serving as a boatswain under his command and following in his footsteps. But his untimely demise had left his widow and son at the beneficence of the kingdom.

Ella’s father, Robin, had taken them on, providing steady work until fever had suddenly taken him away, with Much’s mother following quickly behind. The staggering loss had left Much and Ella reeling, grappling for some fragment of hope, an element of security—qualities that they’d had the great fortune of discovering in one another, bonding them at once in heartache as well as mercy.

Then, in a startling turn of events, tragedy had taken a turn for the positive. Lady Margaret had deigned to agree with Ella, who’d insisted that Much be permitted to continue his employment assisting the manor’s only carpenter. Whether due to genuine benevolence on her stepmother’s part or some peculiar sense of duty, Ella was never certain. Still, it was a small victory that she and Much readily welcomed.

“Blast this wretched wind,” Much grumbled, his complaint a swell of haze in the frigid air. “Remind me to wear several more layers of clothing for our next outing.”

“And you dare to deem me the foul-mouthed one between us?” Ella demanded, bringing about a reluctant smile from her surly partner in crime. “Perhaps you should reconsider.”

“Your words are well received, milady.” He raised his brows in satisfaction, well aware that his use of the highborn term was profane to Ella’s sensibilities. While he knew his place in Llundynien society, Ella had never treated him as lesser than an equal and always took his ribbing in good humor.

“Well, you’re a fiend, James Much. Cease your peevishness at once so we may complete the task at hand,” Ella intoned in a haughty impersonation of Lady Margaret, giggling with pleasure as his features crumpled in annoyance.

“Oh, but you do that too well, my friend.” Much laughed, shoving her playfully in the shoulder. “How many more deliveries?”

“Only two.” Ella patted the satchel that had been replete with various dried meats, grains and hard cheeses only hours ago. Now it was close to empty, bringing about a sobering reality. “How does it go so quickly? What we have will never suffice.”

“You’re doing your best. Your father would be proud,” Much said with reverence, warming Ella’s aching heart. “I don’t know of many nobles who give one thought to the peasants occupying their lands, and here you are, feeding yours from your own stores. It’s far better than doing nothing.”

“Yes, but also not nearly enough,” Ella agreed. “And besides, I thought the food didn’t belong to me yet.” Recalling Much’s previous assertions, she couldn’t help elbowing him in the ribs, nearly tumbling from her horse in the process.

“Careful!” Much hissed, grasping her arm and righting her before she slipped too far. “What good can you do for your hamlet if you meet your end beneath your horse’s hooves?”

“Worry not.” Ella resettled into her saddle as she adjusted her grip on the leather reins. “I do believe I’d live forever, simply to spite the lovely Lady Margaret.”

Brittany has been a cosmetologist for over a decade, an occupation that continuously explores fresh avenues of creativity and beauty. She is a new mother, learning to balance the reality of what it means to be a mom, wife, stylist, and author. Reading has always been one of her passions and writing an endeavor she refuses to leave behind.

Erin is a wife and mother who loves spending time with family. She’s an enthusiastic fan of all things sports, experimental baker/chef, and amateur gamer in her free time. Writing has been a passion since her childhood, and while finding peace and quiet in which to write never comes easily, she knows it worth every ounce of chaos when the stories take shape.

‹ Wolf Claims His Pack by N.J. Walters › Happy Faking Plus One by Della Cain