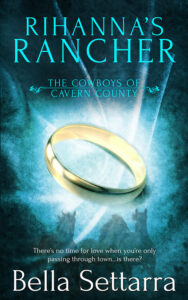 Book 6 in The Cowboys of Cavern County series

There’s no time for love when you’re only passing through town…is there?

When Rihanna Richards takes a job as the new bank manager in Pelican’s Heath, she is relieved to leave her life in the city behind, especially with all the pitiful expressions of those who are only too aware of how Phil Cartwright dumped her shortly before their wedding.

Ace Blenheim, the new foreman at the Shearer Ranch, also came to the town to put his past break-up behind him.

When the two meet, sparks fly. It seems they both have a tendency to wind each other up, and neither is willing to back down. Rihanna’s stubbornness and Ace’s knack for making assumptions lead to a very fiery relationship.

Ace gradually learns a little about his beautiful nemesis, though, and softens his approach toward her. After all, he can’t deny how he has begun to feel about her.

Rihanna secretly has feelings for the gorgeous cowboy but can’t afford to let her heart get broken again—and, besides, she’s not planning to stay long in Pelican’s Heath.

Rihanna discovers that something is very amiss at the bank, and when her life is at stake, will anyone care enough to come to her rescue? And has Ace overstepped the mark completely when he delves into her past?

Rihanna frowned at the figures on the screen. It was going to take a while to get her bank balance to look anything like healthy again. In her job, that wasn’t a good thing—the bank manager with the humungous overdraft!

Her wedding dress hadn’t fetched half what she’d paid for it, and the fancy hotel had refused to refund her a single penny for the canceled reception, despite the fact that they’d gotten months to find another couple to take their place. She wished now that she hadn’t been so keen to pay it all off early. Had she paid in monthly installments, she’d have saved over a thousand dollars on the cost of the venue, but she could never bear to be in debt. “Never a borrower or a lender be,” her dad had instilled into her from an early age, and she’d lived her whole life by the motto.

Phil Cartwright had been the love of her life—and now he was the bane of it.

“At least he didn’t jilt you at the altar,” Mum had said, sympathetically.

Rihanna half-wished he had. At least then everyone would see for themselves what a cruel, heartless bastard he was. And she’d have gotten the chance to wear that gorgeous dress and show off her new figure. But the humiliation of him turning her down in front of everyone—or, worse still, not turning up—would have been insufferable. Almost as bad as having to return all the gifts and explain to everyone that the wedding was off.

Of course, they’d all been sorry for her, which just compounded the situation. She hated pity about as much as she hated Phil Cartwright right now. That sorrowful expression of his haunted her dreams, as well as every waking moment.

Oddly enough, he’d omitted to mention that it wasn’t going to work out with her because he already had someone else waiting on the sidelines—someone much richer and more sophisticated than Rihanna could ever hope to be. That much didn’t become apparent until way after he’d moved out and left her to deal with the fallout. Bastard. She’d spent weeks believing it was her own fault, that she hadn’t been good enough for him. She’d even begged him to give her another chance, for God’s sake!

This promotion couldn’t have come at a better time. She’d moved all her belongings into storage, packed a bag and headed out into the middle of nowhere to begin a new life—not where she wanted to be, of course, but at least she was away from Phil Cartwright and all her sympathetic, well-meaning friends and family.

She looked around the hotel room the company had put her up in. It was nice enough—clean, with high ceilings and dark wooden furniture. Not quite as good as she’d have had in New Moldington, but then, she was no longer in the city. Far from it…literally. This was Almondine in Cavern County. It had been described on the net as ‘a busy town with everything a person could need’. Yeah, right. She wouldn’t count on that.

The new job was in a place called Pelican’s Heath, a few miles down the road. She’d been told it was more rural there and had been highlighted as ‘a small up-and-coming town with lots of potential’. Yet it didn’t even have a decent hotel for the bank to accommodate her in! Not that she’d want to stay too close to where she worked, anyway—not in her position. She was the boss and needed to be seen as such at all times, not be caught socializing with staff and customers during her downtime.

Talking of her new position, she noticed the clock by the bed as she checked that her hair was neatly tucked into a bun. Only a quarter to seven? That couldn’t be right, surely? She went over to the coffee table where she’d left her cell charging. Half past eight? Shit! She was about to be late for her first day. What sort of impression would that give everyone?

She threw her laptop into its case, grabbed her phone and handbag and charged out of the door. She’d complain to reception later about the damn clock.

She likes to keep busy, cramming as much into each day as she possibly can, while battling—and is determined to win—against breast cancer. She loves to hear from her readers, so please get in touch!