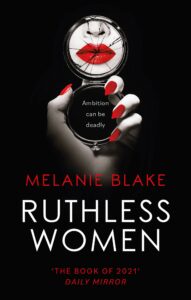 Ruthless Women takes readers on a wild ride behind the scenes of beloved TV drama Falcon Bay, beamed globally to millions three days a week from its picturesque location in the Channel Islands. But even in this beautiful coastal spot, tensions swirl. Once one of the world’s most popular soap operas, but now with ratings and syndication at an all-time low, the production has been sold to an American businesswoman, beautiful and malevolent Madeline Kane, the new network owner who arrives on the tiny island just off Jersey, determined to do whatever it takes to get the show back to number one.

Writer Farrah, star Catherine and producer Amanda are the driven, ambitious women who keep the show on the road. But Farrah is losing episodes to the network’s lead male rival, Catherine is terrified of the public falling out of love with her and Amanda’s evil husband Jake, vice president of the network, is plotting to get his own wife kicked off the show.

As the dawn of a new era begins, cast and crew turn against each other with loyalty, decency, and trust, replaced by scandal, betrayal, and an outrageous ambition to survive.

In a true battle of the sexes, these women will do anything to stay on top. But can they team up to bring down their male rivals? Or will jealousy, betrayal and revenge tear their long-held friendships apart?

As the story reaches a climax so shocking readers will be talking about it for decades, one thing is certain: only the most ruthless woman will survive…

Bestselling author Melanie Blake‘s own real life Rags to Riches story reads like the plot of an outrageous drama… At fifteen years old Melanie Blake was told by her high school career advisors that her decision to do work experience at a local record shop was an “embarrassment to the school and a clear example that she wouldn’t go far in life or her career.” They were wrong. By twenty-one she was working at the BBC’s iconic Top of the Pops show and by twenty-seven she had built a reputation as one of the UK’s leading music and entertainment managers, with her own agency and roster of award-winning artists who had sold more than 100 million records. During this time she also built up an acting agency from scratch which quickly became the most successful independent boutique agency in the UK where she manages clients from some of the biggest internationally syndicated shows in the world. Her roster have won Baftas, Emmys and pretty much every best actress award going and Melanie is one of the most successful female agents in the world. In the UK alone, over 25 million people a week currently tune in to watch the very stars Melanie represents in their globally syndicated shows. In 2018 after two decades at the top of her game, Melanie decided to manage a smaller client list and concentrate on her other passion, writing – first as a columnist for a national newspaper, then as a playwright and now as a best-selling novelist. Her first book The Thunder Girls became a Number 1 Bestseller in the summer of 2019 and the play she adapted from the novel broke box office records for a new work at the prestigious Lowry Theatre. She still represents a high profile stable of some of the best known faces on British television but is also now enjoying success in her own right as a producer, author and playwright.