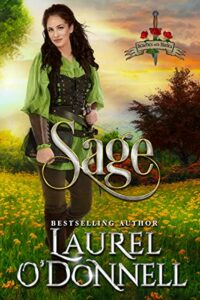 The greatest treasure for her was to read, until she fell in love

Throughout Sage Hawke’s life, she has wanted to learn to read, believing knowledge is power, but the only power her family believes in is the edge of a blade. When a mysterious book is found, a book written with a secret code, Sage’s sisters turn to her for answers. Charged by his cousin with retrieving the book, Marcus de Nogaret takes his mission seriously. When he learns the book contains a secret code, he kidnaps a woman he believes can decipher its secrets, hoping he will be well rewarded when he reveals the book’s mysteries. Each turn is fraught with danger as Sage and Marcus learn that others are after the book and will kill to possess it. Can Sage and Marcus work together to figure out what secrets the book holds and why men are willing to kill for this book, or will they discover love is a more powerful treasure?

The Hawke sisters are far from typical women. Raised by their father the legendary John Hawke, the girls are taught how to fight with swords, how to survive in a man’s world, and above all how to protect the family. They are Beauties with Blades. Come along on their adventures as these bold and brave women save innocents, discover secrets, and fall in love.

“Do you know how to use that weapon?” She jerked her chin toward his sword.

He lowered the bread and straightened his back. He swallowed his bite before answering, “Would you like to find out?”

A grin twitched her lips. “Yes,” she answered with more enthusiasm than she wanted to show.

For the first time, Sage noticed his powerful movements, his grace. Like a lion. Intrigued, she waited for him to remove his weapon. She wasn’t sure if he really intended to cross swords with her. He knew who she was. He must know how good she was with a weapon.

He returned to the horse and retrieved her belt and sword. He walked back to her and handed them to her.

She stared at them, so very appreciative to finally wear them again. She strapped on her belt, relishing the familiar feel. She felt whole again.

Slowly, purposely, he eased his blade from its sheath. The hiss was a familiar sound to Sage. Anticipation burned in her veins. Oh, this was going to be fun. She ached to exercise her body, and this was the perfect way to do so. If she unarmed him, she would tie him up, take the book, and make her escape. Suspicion wormed through her. He must realize that too. So, he must be good. She would not underestimate him.

She drew her sword. It hissed like a snake ready to strike.

He approached leisurely, lithely, and crossed blades with her. “Are you sure you want to do this?”

“I told you before that I wasn’t afraid of you,” Sage answered, gazing at him through the crossed metal of the blades. Fighting wasn’t her favorite thing to do, but it certainly was exercise, and after a half-day of riding, she could use it. Plus, it gave her a chance to see how skilled he actually was with a sword.

They stood that way for a moment before he exploded in swings, striking her blade again and again.

The tings rang out through the small glade.

Sage was hard-put to defend herself, but she was no beginner. She allowed him to drive her back; she allowed him to think he had the advantage as she watched for a weak spot in his attack. Anything. Instead, she was impressed by his skill. He used his whole body to direct the blow, and he was quick, powerful.

She deflected his blows. Each strike against her weapon rippled up her arm.

He caught her sword with his and swirled his wrist in a circle. If she had not been trained her entire life to fight, her weapon would have spun out of her hand. But she was trained. Well. She grinned. It was an admirable move. But not good enough. She held the pommel of her sword firmly.

She planted her foot and stood her ground, defending against his blows.

The swords clanged with each blow, ringing through the forest.

For the first time in the encounter, Sage attacked, swinging her sword at him. He leaned away from her parries, and her blade hissed through the air in a semicircle, inches from his chest. She thrust, and he dodged to the side, bringing his sword up toward her neck.

She stepped back, avoiding the tip of his blade.

They circled one another. Sage breathed deeply. She admired his skill. But this was child’s play. They were testing each other.

He lunged in, and she knocked his blade aside. She pushed forward with a cache of swings until she was close enough to hook her foot behind his. When he stepped back, he tripped and fell flat onto his back.

Standing over him, Sage put the tip of her weapon to his neck.

He grinned from his position on the ground. “Impressive.” He brought his blade up, pushing hers away, and rolled to his feet, bringing his weapon up before him.

Sage held her sword with two hands, unmoving. He was good. She would give him that. But she wanted to escape with the book. Playtime was over. She attacked, driving forward.

He knocked her sword aside and deflected each of her blows, answering with his own.

It was a dance of death, a dance of skill. Thrusting and parrying. Swords rang out through the forest like the beat of a drum.

Sage retreated to a tree trunk and ducked his swing. It lodged in the bark above her head, and she spun away. He pulled the weapon free and continued after her with a flurry of strikes.

She knocked them away, using a two-handed grip on the handle of her weapon for more strength. She pushed one of his arcs aside, and he stumbled. Perchance over a branch or stone, she didn’t know which. He backed into the trunk of a tree. She quickly stepped in close, placing the side edge of her blade to his neck.

Time froze. Her arm was bent, so the sharp side of the blade pressed against his throat.

His gaze moved over her face.

She was so near to him that their bodies were touching, and Sage could feel the heat radiating from him. She held the blade to his neck, breathing deeply. She was suddenly aware of how close they were, how her breasts brushed his chest. Even through her armor, her nipples tingled and hardened. Her gaze swept his face. From his deep blue eyes to his sensual lips. She swallowed in a suddenly dry throat.

Repentance and Absolution by AE Lister