SEAL Next Door by Paige Tyler 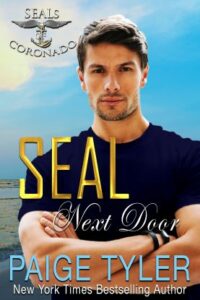 Poppy McCoy wasn’t looking for a boyfriend. In fact, she gave up dating altogether. She’d found out the hard way men don’t like smart women—and she wasn’t playing the dumb blond role just to have a social life. Been there, done that, epic fail. But when her new neighbor turns out to be the hottest thing since habanero sauce, the attraction is instantaneous, and it seems he feels the same. He’s even impressed by her genius-level intelligence. She’s never met someone so perfect for her. Good thing he isn’t a Navy SEAL or Poppy wouldn’t even consider going out with him.

Navy SEAL Sam Travers is on the lucky streak of a lifetime. First, he gets a great rent-controlled apartment. Then his new neighbor turns out to be the most beautiful woman he’s ever seen. She’s funny and smart and, well, perfect—except, she doesn’t date SEALs. Sam didn’t exactly lie-lie…he told her he was in the Navy. And he fully intended to tell her…at some point. But coming clean two minutes before she meets his family and Teammates isn’t the best plan. Finding out Poppy has a few secrets of her own, makes Sam doubt the lucky streak he thought he was on, and throws their relationship into a tailspin.

Things can’t get much worse—but they do. When Sam’s Team is sent to intercept the sale of a nuclear warhead to terrorists, the CIA sends a physicist with the SEALs. Poppy McCoy, Ph.D.

To repair broken hearts and a leaking nuke, Sam and Poppy will have to learn to trust each other again. Is it too late to save the world and their relationship?

“Want to read an action-packed, suspenseful yet romantic story with strong male AND female MCs with fun supporting characters? This is it!” – Goodreads Review

“This story is well written, action-packed and let’s not forget sexy. Interesting and Suspenseful. I highly recommend.” – Goodreads Review

“I really enjoyed this story! A fun and entertaining read!” – Amazon Review

Visit Paige on the web: https://paigetylertheauthor.com/

‹ Loco by Tory Richards › Any Day by Brian Lancaster