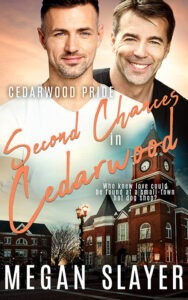 Who knew love could be found at a small-town hot dog shop?

Jack Walters opened his hole-in-the-wall restaurant to serve hot dogs—being a chef is all he’s ever wanted out of life. Love hasn’t worked out for him, so the last thing he expects is to find romance at his shop. But Jack’s been hurt before and he’s leery of the sexy man who keeps visiting his restaurant.

Henry Lord has been all around the world. He’s visited gourmet foodie places and tiny restaurants, but he loves the ambience at Jack’s Hot Dog Shop. He’s also in lust with the sexy owner. Henry’s shy, but he’s determined to get Jack’s attention. There are people who want to use Jack and change him.

Not Henry. It’ll take a herculean effort to prove to Jack that he’s the one for Henry. Good thing Henry believes in love, second chances and finding his home…in Cedarwood.

“Who needs a hot dog?” Jack Walters stood behind the grill at his one-room hot dog shop and surveyed the landscape. Fifteen people had packed into the space—ten waiting on orders and five spread among the three tables. People waited outside. He could almost hear the chatter of the customers over the sizzle of the grill.

Jack lived for the blur of action. He loved his shop and serving food to the people of Cedarwood. Truth be told, he liked being needed in the community and he enjoyed the din of conversation. He’d heard so much gossip over his twenty years at the shop. Couples splitting, people cheating on lovers and spouses, people cheating in business, discussing business, politics…he’d heard it all.

Unlike some of the restaurants in Cedarwood, he kept his business rather plain. Sure, there were metal signs from other hot dog shops and old advertising signs on the wall, but he wasn’t going for upscale ambience. He wanted a quick in-and-out type of establishment. Cash only and most customers took their food to go. He’d considered opening at a bigger location, but why mess with what worked?

He spotted Henry at one of the tables. Most people didn’t bother to stop and sit. They wanted quick and convenient. Henry seemed to linger every day, coming in after one in the afternoon, then staying until closing at three.

Jack filled orders, but his mind wandered to Henry. He didn’t know much about the guy beyond that he was a writer. He’d read a few of Henry’s articles in the local paper and seen his work in magazines displayed in the bookstore.

He’d learned the most about Henry—most of which he doubted was true—through the gossip grapevine in Cedarwood. Everyone talked about everyone. Henry lived alone, wrote stories and articles, traveled and didn’t say much. Henry liked order and could be cranky when things didn’t go his way.

Most people got irritated when things didn’t work out. He knew—he’d seen it at the shop. Hot dogs without the right toppings, with the right ones but cold or too hot, or swearing they’d been overcharged. He shook his head. Every hot dog cost exactly three dollars. Condiments were free, but cheese, jalapenos and chili cost an additional fifty cents each. The sodas were two bucks and fries cost a dollar. Easy.

Jack served up another handful of hot dogs, then read through the new orders. He added a new batch to the grill and glanced over at Henry. He wondered how old he was, since no one seemed to discuss that point. He couldn’t be much older than Jack’s forty-five years. Sure, he had some gray hairs on his temples and scattered through his short sandy tresses, but lots of people went gray far before middle age. Hell, he’d started showing grays at twenty-eight. He swore the loss of color came from the stress of the shop.

He served up the hot dogs and only a few people were left in the shop. There tended to be a lull at two in the afternoon. People couldn’t seem to remember if his shop was open until two or three, even though he’d kept the same hours since he’d opened the shop twenty years before. The lull always happened at the same time, but the action ticked back up at two-thirty. “I’ve got to rush to get an order in before you close,” they’d say. He didn’t care.

Anna, his lone employee, closed the cash register and joined him at the grill. “That’s the last one for now—Henry’s paid.” She elbowed him. “He’s only asked for one refill.”

“He ordered,” Jack murmured. “All I ask is they buy food if they’re going to linger and he eats here every day. Leave him alone.”

She picked up an onion and one of the larger knives. She chopped the vegetable into small bits. “Just makes me wonder why he hangs out here so much. Think he’s bored?”

“No.” He’d kept an eye on Henry. Every day, Henry brought his notebook with him and jotted in the pages while he ate. Jack scraped the grill down, then lowered the heat. “I’m going to stretch.” He left the spatula in the holder, then rounded the grill. He strode right up to Henry. “Can I refresh your soda for you?”

“Oh.” Henry blushed. “Sure.” He closed the notebook. “Sorry. Got lost in my writing. Am I bothering you?”

“Nope.” He ducked behind the counter long enough to refill the cola, then brought the glass back to Henry. “I’m taking a break. Mind if I sit with you a moment?”

“No. Please, do.” Henry moved his notebook out of the way and gestured to the other chair.

Now that he was right across from Henry, he could really look at him. The grays in his hair worked for him and gave him the look of seriousness without seeming severe. His blue eyes sparkled when he smiled, and Jack swore he had a dimple on the left side. Henry folded his hands on his notebook. Jack liked hands and preferred men with clean ones. Blunt working ones were fine, but he preferred pianist ones. Henry didn’t disappoint. Jack wondered what he’d look like holding a fountain pen. Probably sexy. He suppressed a snort. He barely knew Henry, but he’d already fantasized about him. At least the man was handsome—close-up and far away, too.

“You’re staring at me.” Henry’s blush increased. “Am I wearing mustard on my mouth?”

“No.” Jack averted his gaze. This time, his ears burned. “I’m sorry. I spend so much time behind the counter, and I don’t get much of a chance to talk to the customers. You’re always in here, so I wanted to chat, but I got lost in the comfort of sitting.” Jesus. How ridiculous? The comfort of sitting? He pinched the bridge of his nose. “Sorry.”

“It’s okay.” Henry held out his hand. “I’m Henry Lord. I write travel articles for magazines and I’m a libra. I’m forty-seven and single. I like long walks at sunset and the quaintness of this shop.”

He laughed at Henry’s means to break the tension. “Thank you.” He nodded. “I’m Jack Walters. I own the Hot Dog Shop and I’m not sure which astrological sign I am. Never bothered to look. I’m forty-five and single, too. I spend too much time at the shop and not enough at home.”

“Nice to meet you.” Henry smiled. “Looks like we’re both a bit flawed.”

Jack shrugged. “There’s something to be said for flawed.”

The bell dinged and a group of customers entered the shop. Jack sighed. “Duty calls. Maybe next time we’ll get to chat for more than a few moments.” He winked, then left his seat and resumed his position behind the grill. Of all the times he had to work, it had to be this one, when he wanted to get to know more about Henry. A travel writer. Interesting. He’d barely ventured out of Ohio. Henry had probably traveled all over the globe. His partner had to be either very forgiving or the travel had led to their breakup.

A thought occurred to him. Henry hadn’t said he was gay, but he’d mentioned he was single. Christ, he had to get his overactive imagination under control. For all he knew, Henry wasn’t gay—just single. All the handsome ones in Cedarwood tended to be straight. Most of the gay men had paired up.

Jack focused on making food and tried to ignore the need to look over at Henry. He’d felt a spark when they’d locked gazes, but Henry seemed shy—not attracted. Jack shook his head. Knowing him, he’d overestimated the spark. Again.

He wanted to be in love. Wanted to be needed. There had to be someone out there for him. Someone who understood he had a business and was required to be there if he wanted to make money. Someone who could love him, despite his tendency to close himself off. He needed a partner. An equal.

Talk about a lot to superimpose on someone. Henry might not be interested in being all those things. Might not want to be any of them.

Jack focused on grilling hot dogs for the two-thirty rush and did his best to ignore Henry.

Why focus on what might not even be possible? Because sometimes the impossible did happen.

Megan Slayer, aka Wendi Zwaduk, is a multi-published, award-winning author of more than one-hundred short stories and novels. She’s been writing since 2008 and published since 2009. Her stories range from the contemporary and paranormal to LGBTQ and BDSM themes. No matter what the length, her works are always hot, but with a lot of heart. She enjoys giving her characters a second chance at love, no matter what the form. She’s been the runner up in the Kink Category at Love Romances Café as well as nominated at the LRC for best author, best contemporary, best ménage and best anthology. Her books have made it to the bestseller lists on Amazon.com.

When she’s not writing, Megan spends time with her husband and son as well as three dogs and three cats. She enjoys art, music and racing, but football is her sport of choice.

Find out more about Megan on her website and sign up for the newsletter here. You can also check out her Blog, Amazon Author Page, Bookbub, and Instagram.

Enter to win a fabulous gift package and get a FREE eBook from the author!

MEGAN SLAYER IS GIVING AWAY THIS FABULOUS PRIZE TO ONE LUCKY WINNER. ENTER HERE FOR YOUR CHANCE TO WIN A LOVELY GIFT PACKAGE AND YOUR FREE MEGAN SLAYER ROMANCE BOOK! Notice: This competition ends on 2nd March 2021 at 5pm GMT. Competition hosted by Totally Entwined Group.