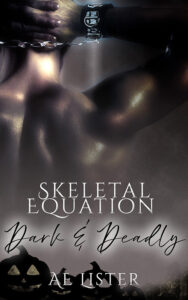 What do medical kink, pup play, and Halloween have in common? Scott Vernier. A visit to the local leather bar offers an unexpected treat!

Scott Vernier is lonely and bored, but he’d rather sit at home and mope than go out. A promise to a friend forces him to attend the annual Halloween party at Sonny’s, his local leather bar. Amid the tacky costumes and seasonal desperation, Scott meets two people he never expected to encounter.

Can a man well-versed in medical kink and his leather-pup boyfriend introduce Scott to a whole new world of illicit pleasure?

When Dr. Jericho Griffin gets down to business, Scott finds himself responding in explosive ways.

Reader advisory: This book features discussion only of scat, enemas and needle play. There are scenes of pup play and a scene involving voyeurism.

The scariest thing about Halloween currently was how little I cared for it. As a younger gay man, I’d have planned my costume for months, figuring out the sexiest way to be a zombie, a vampire or any of the other popular standards, and I’d have attended at least three parties to try to get laid. Now I was too old and jaded to care about any of that.

But it was a week until Halloween, and I had no excuses. I’d told Duke I’d be at the local gay leather bar for the annual party. He was scheduled to bartend that night and I’d foolishly committed to being there, at least for part of the evening.

I’d loved it as a child, and as a teen and young adult, it had been an excuse to get smashed and flirt with people I’d be too intimidated by otherwise. But now, as an adult? Halloween seemed like a waste of time. I definitely had better things to do.

It was true that I hadn’t socialized a lot recently, because my job was exhausting, even though it fulfilled me. As an anthropology professor at the local college, I had classes to teach most days and students to support during office hours. Then there was the prep time and marking… I’d managed to fit my life into an organized and workable routine, but I was a busy man.

I had promised Duke I’d try to have some fun, simply to get him off my back and stop him from calling me ‘old before my time’—although the annual Halloween Ball at Sonny’s wasn’t exactly my idea of a great time.

But costumes were compulsory for this event, so I had to make at least a minimal effort. I had a T-shirt, somewhere, with glow-in-the-dark bones on it. If I could find it, I’d wear that and say I was a skeleton. Yeah, that was pretty dumb, but the guys who worked the door knew me, and I was pretty sure they’d let me in. It paid to be friends with the bartender, even though he pressured me to be more social.

I liked Duke a lot. He was a bear of a man but the sweetest guy anyone would ever meet. I’d gotten to know him when he’d taken one of my anthropology courses. He’d invited me for dinner once the semester had ended, and he and his cute-as-hell boyfriend Julius had cooked me the most amazing spaghetti Bolognese I’d ever eaten. It was a fast friendship with them both after that. Julius worked in IT and made good money, so Duke could bartend a few nights a week and spend the rest of his time making small sculptures out of reclaimed ‘junk’ and taking occasional classes of interest to him.

I didn’t have many close friends, and I considered Duke and Julius to be an important part of my life, especially as I hadn’t been able to find a partner to join me on this questionable journey. I’d had the occasional boyfriend, but the long-term bond had never become anything significant before either I or the other guy decided things weren’t working. I wondered if I had the temperament for a permanent relationship.

Some people were meant to be single and maybe I was one of them.

I dug through three drawers before I found my skeleton shirt scrunched in the corner. Great, it will be wrinkled as well as dumb. Ah well, there was nothing to do about it. I wasn’t gonna fucking iron it. I didn’t even think I owned an iron. Ironing seemed like the most useless and annoying chore on this planet, and I wasn’t going to be a part of it.

I slid the shirt over my head and stepped in front of the mirror. It fit a little tight, but that was okay. That just showed off my slim build to my advantage and made some of the wrinkles disappear. The sleeves were plenty long and the fabric gathered slightly at my wrists. I pulled down on the bottom edge of the shirt. It wasn’t too bad but would probably show skin if I had to reach my arms up. I wasn’t planning to do that, so it should be fine.

The bones glowed in the dimness of the room, even though the shirt had been in my drawer. I’d wear it around the house so it could absorb more light. I’d have to be careful not to spill anything on it while doing the dishes, but the more I wore it, the quicker the rest of the wrinkles would come out.

Luckily, I was able to load the dishes and wipe the counter without incident, and when I checked myself again, I was pleased with my half-assed attempt at participation. It would have to do, and at least I looked sexy. I’d put on my brown faux-leather pants that hugged my hips and showed off my long, slim legs. I was of average height and my black hair had begun to streak with gray, but I was fit and strong and didn’t look half bad tonight, if I was honest. Maybe the visit to the popular club would be worth it and I’d be able to bring someone home for the evening. It had been a while since I’d seen any action. I didn’t want to contemplate how long.

I went to the bathroom and used some gel to muss my hair into an artfully untidy style. At the last minute, I applied some black eyeliner that I saved for special occasions when I was feeling it. Even though my enthusiasm for the Halloween party was negligible, my interest in seducing a warm body for a few hours began to rise.

AE Lister/Elizabeth Lister is a Canadian non-binary author with a vivid imagination and a head full of unique and interesting characters. They have published 10 books, one of which received an Honorable Mention from the National Leather Association – International for excellence in SM/Leather/Fetish writing.