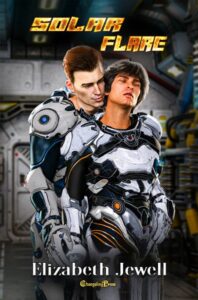 There’s one place in the universe vampires can bask in full sunlight – a red star deep in open space.

Solar Flare: The Lightning Girl will take vampires to the crimson star to experience the novelty of constant day. But Kristof is afraid to take that last step into the light — until Tomas takes his hand.

Crimson Star: With the entire crew of Lightning Girl dead except for Ash and Trev, the hyperdrive down and the oxygen running out, Trev is determined to save his lover’s life — no matter what the cost.

Emerald Earth: Ash and Trev were lovers when catastrophe befell the long-haul freighter Lightning Girl, but after twenty-five years of solitude and starvation, things may never be the same between them.

Lightning Girl: Triss’s a type of gender-fluid vampire thought to be extinct. His intriguing nature piques Cal’s interest, but Cal’s not sure if it’s the journalist in him that wants to learn more about this enigmatic vampire or the man who wants to get to know him in every possible way. In the light of the Crimson Star, they’ll have to come to terms with their boundaries, their secrets, and the ultimate nature of love.