Somebody to Love by Sharon Sala 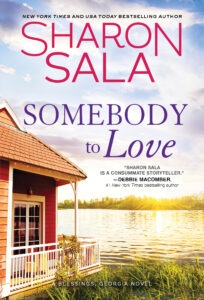 Welcome to Blessings, Georgia! Whether you’ve lived here your whole life, you’re returning after years of being away, or you’re new in town, you’re sure to find the happy ending you’ve always been looking for.

Fifteen years ago, a family member stole the money Hunt Knox had saved for college, while three of his siblings and his father hid the truth and told him to get over it. Betrayed by their lies and thievery, Hunt joined the army and wound up flying Apache helicopters in Iraq. Now, he’s a chopper pilot for an oil company in Houston, Texas, his father has been dead for six years, and he’s finally returning home to Blessings at his mother’s dying request.

Ava Ridley, the little girl his mother used to babysit, has grown up and is a nurse at his mother’s bedside when he arrives. Ava is overjoyed to see him. She had a huge crush on him when she was young. And as the two spend more time together, Ava’s crush grows to be even more.

Through secrets, lies, family betrayal, and difficult choices, Hunt’s not sure he and Ava can ever make a home together in Blessings. Or if life will once again lead them onto different paths…?

Hunt rode across town, past the park, and then west down Peach Street to the little house at the end of the block. He’d seen this house a million times in his dreams, but it hadn’t looked sad and run-down like this.

A black pickup was parked beneath the carport, so he rolled up and parked beside it. He got the house key out of his pocket, but as he headed toward the back door, the hair stood up on the back of his neck. He didn’t believe in ghosts, but this house didn’t feel like it wanted him there. That was fair.

He didn’t want to be here, either, but a promise was a promise.

He unlocked the door and walked into the utility room just off the kitchen, turning on lights as he went. All of the furnishings were here. If it hadn’t been for the faint layer of dust all over everything, he could imagine his mom had just stepped out to run an errand and would be back soon.

There was a low spot in the middle of the kitchen floor—probably floor joist issues. The old hardwood flooring was scarred and worn, and the furniture was threadbare. The sight of this neglect made Hunt angry. How could his brothers and sisters let this happen? They were all right here in the same town together.

The year Hunt began high school, they’d remodeled the attic enough to call it a bedroom, and for the first time in his life, he’d had a room of his own. Curious to see what it looked like now, he went straight up the narrow stairwell at the end of the hall and opened the attic door. The single window was bare of curtains or shades, and the dust motes in the air stirred as he moved through the space now filled with boxes of old memories that should have been laid to rest years ago.

The bed he’d slept in was gone. The closet door was missing, the closet empty. Even the rod where his clothes used to hang was gone. It was as if they’d wiped away all memories of him. If only he’d been able to do the same.

He went back downstairs, glancing in his mother’s room and accepting it was the only one decent enough to sleep in, then began eyeing all of the things that needed repair.

He went back to the kitchen to check out the appliances. The burners on the gas stove lit, the oven came on. The dishwasher was clean, and the single glass in the top rack told him it had recently been in use and was likely in working condition—something he’d find out later.

The water pressure was good, and the washer and dryer appeared to be in working condition. The refrigerator was the newest appliance in the house, but nearly everything inside it needed to be thrown away. He didn’t know for sure how long his mother had been in the hospital, but the carton of milk was over a month out of date, and the single container of peach yogurt had long since expired.

The ice in the bin beneath the icemaker had all frozen together, which meant the electricity must have been off at one time long enough to melt it. Then when the power returned, it froze back. So he took the bin out and dumped the ice in the sink, then put it back beneath the icemaker to start making fresh ice, then dumped everything that was in the freezer and refrigerator into the garbage.

The central heat and air were still working, and they looked newer than he remembered, which was good. There was a big job ahead of him to do this right, but in the long run, it would make a huge difference in the sale of the house. However, this task was going to take tools as well as supplies, so he went out back to the toolshed to see what, if anything, was left.

The light bulb was burned out in the shed, so he left the door open as he went in to look around, and it was just as he feared. There was nothing left in it but a couple of old hammers, a hand saw, and an old sack of roofing nails. Seeing the nails reminded him he needed to check on the condition of the roof as well. He could rent tools and hire help. It wasn’t the end of the world, but it was going to be a pain in the ass coping with his family while it happened.

He found a set of car keys hanging on a hook in the kitchen and guessed it was to the truck. If it ran, it would be handy to use while he was hauling stuff to the house to make repairs, so he went out to check. The insurance verification in the glove box was in Marjorie’s name. He turned the key to see if it would start, and the engine turned over immediately. So he locked the house and drove to the bed-and-breakfast to pack up his things and check out.

Bud was scanning Hunt’s card to pay for his room when Hunt thought about the locks he needed to change.

“Hey, Bud, is there still a locksmith here in town?”

“Yes, there sure is. Mills Locks, next door to Bloomer’s Hardware on Main Street. The owner’s name is Cecil, but everything is probably closed today.”

“Okay…I remember him,” Hunt said. “Thanks, and thank you for your hospitality,” he said, then carried his bag out to the truck. Out of curiosity, he drove straight to the locksmith, saw the Open sign on the door, and went inside.

The man at the counter looked up.

“Welcome to Mills Locks. I’m Cecil Mills. How can I help you?”

“I need a couple of new locks put on a house I’ll be remodeling. Would you be available to do that today?”

“Yes, where Marjorie Knox lived. I’m her oldest son, Hunt. I’m going to fix it up some before it’s put up for sale.”

Hunt nodded. “She passed away early this morning.”

Cecil frowned. “I hadn’t heard. I’m real sorry about that. I’m waiting on a customer who’s on the way in from his farm, but I can get away around noon, if you don’t mind me coming at your lunch hour.”

“I’m not on any schedule. You sure you’re okay working on New Year’s Day? It could wait until tomorrow,” Hunt said.

Cecil shrugged. “I’ve already been called out twice today for emergencies, and my wife is home and sick with the flu. I’d just as soon be here.”

“Then noon is fine. Do you know the address?” Hunt asked.

“It’s the last house on the right at the end of Peach Street, right?”

Hunt nodded. “Yeah. My Harley and her black pickup will be under the carport.”

“Right,” Hunt said, and left the shop, then stopped by the grocery store. He was surprised to see that it was no longer a Piggly Wiggly, and had a new facade and a new name to go with it. The Crown.

Nobody recognized him, which made shopping easy, until he got up front to pay. The cashier who was checking him out kept looking at him, and when he put his credit card in the reader, she finally spoke.

“You sure do look familiar. Are you from around here?” she asked.

Hunt nodded as he put his card back in his wallet. “I’m Hunt Knox. I used to sack groceries here back when it was still the Piggly Wiggly. You’re Millie, aren’t you?”

“Yes! I’m Millie Garner! I knew you looked familiar. I just heard about your mother’s passing. My sympathies to the family,” she said.

“Thanks,” he said, and began putting his bags back in the shopping cart.

“Do you plan on staying here?” she asked.

“Only long enough to fix up the family house so it can be sold at auction. I promised her I’d do that,” Hunt said, then walked out pushing the shopping cart.

By the time he got back to the house and unloaded the groceries, it was getting close to noon. He took off his jacket, then began emptying the sacks and putting up the things he’d just bought.

By the time he was through, Cecil Mills was knocking on his door. He let Cecil in, and then pointed out the locations where new locks were needed.

“There’s just the front door, and then a back door in the kitchen.”

Cecil nodded. “I’ll get those switched out for you and get both locks synced to open with one key. How many keys are you going to want? It comes two keys to a set, so you’ll have four.”

“That’s plenty. I’ll be the only one using one here, but when it sells, then that will be handy for the new owners.”

“Then I’ll get right to work,” Cecil said.

“Call out if you need me,” Hunt said, then took a notepad and a pen and started in the kitchen, making a list of the things that needed to be fixed.