Good morning! My paranormal holiday romance Spirits of Christmas was recently released by Changeling Press. It’s part of the Wild Witches of Beaver Bay series and focuses on two people who thought they would be alone for Christmas, but things didn’t go as planned.

Christa and Joel were fun to write about, even though they each had their own issues that affected their lives and their holiday.

A little about Joel:

The hardest part was writing a hero who constantly lived with fear. Lots of romance heroes have moments of fear or find themselves in frightening situations, but Joel has been dealing with deep fear since childhood. Though he has gone to extremes to prove himself fearless, he still must cope with a lot of terror resulting from childhood trauma.

A few things about Christa:

Christa is a self-confidant woman with a good sense of humor. She has a lot of compassion for others, even when she’s dealing with issues of her own. Also she’s not afraid to enjoy herself.

I hope you enjoy this excerpt from Spirits of Christmas, and I hope you have a wonderful holiday season!

On Christmas Eve twenty-five years ago, a brutal murder was committed at the house where Christa Wild works as a live-in maid. When the other servants leave for the holiday this year she stays behind, hoping that any spirits dwelling there will help her regain the psychic power she lost. She’s surprised when the intriguing but disturbed owner of the house appears several days before Christmas.

Action star Joel Connor has kept a terrible secret for most of his life. Despite his success as an athlete and actor, he is plagued by flashbacks of a gruesome attack that destroyed his family. This Christmas, Joel returns to the house where it happened to face the ghosts of the past, but finds he is not alone.

Joel and Christa are instantly attracted, but will his psychological state prevent them from finding peace and love?

Christa stared at him. “Oh my gosh, you don’t look good again. I think you’re sick. There’s a really bad flu going around. Come here and sit.” She tugged a chair away from the kitchen table.

“I’m fine,” he said. Strange, now that she was here, he could breathe again. Sweat trickled down the side of his face and he swiped at it.

“Here,” She tore a paper towel off the roll hanging under the cabinet and handed it to him. “I have some aspirin. You might have a fever. It comes with the flu.”

“Relax?” she supplied. “That makes sense. The room is all set for you. Can I get you anything else?”

“No. Thank you.” He turned and walked to the stairs.

“If you need something, just give a shout.”

He paused at the foot of the stairs and gazed up to the second floor. The staircase wasn’t as long as he remembered, and it had carpets before. Almost the entire house had carpets, but they had been torn up after the incident. Blood didn’t wash out easily.

He ascended, his boots thudding ominously on the bare wooden stairs. 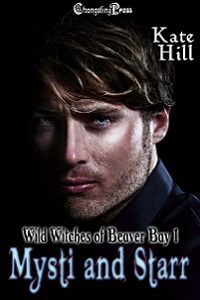 Mysti and Starr
Family magic summons Mysti Wild to her destined mate–a demon hunting biker with secrets of his own.
Link:
https://www.changelingpress.com/mysti-and-starr-wild-witches-of-beaver-bay-1-b-2914?series_id=575
Trinity and Jeff (Coming in 2020)
A firefighter battles the supernatural to convince his lifelong friend that she’s his soulmate.
Link:
https://www.changelingpress.com/trinity-and-jeff-wild-witches-of-beaver-bay-3-b-2973?series_id=575

About Kate:
Kate Hill is a vegetarian New Englander who started writing over twenty years ago for pleasure. Since 1996, she has sold over one hundred short stories, novellas, and novels.
She prefers to blend genres, and she loves horror and a happily ever after, so her books can be a bit unusual. If you’re looking for romance with witches, aliens, vampires, angels, demons, shapeshifters and more, there’s a good chance you’ll find something to your taste in her backlist.

When she’s not working on her books, Kate enjoys reading, working out, and watching horror movies. She also writes under the name Saloni Quinby.

New Release by Tory Richards on 10/6!

Extasy Books has a brand new look! Get 40% off Back list titles!

‹ Greetings from Tory Richards › The Complete Package by Leigh Lennon