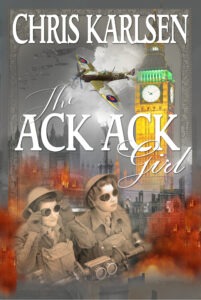 In 1941, the German war machine had conquered all of Europe, only England remains free. Hitler knows to invade England the Luftwaffe must defeat the Royal Air Force. While under constant attack, the valiant pilots of the RAF manage to keep the enemy from executing an invasion. But the RAF suffers great losses. England is in desperate need of more pilots. As a result, the government takes a huge chance and establishes unique teams of women known as Ack Ack Girls. These women are trained to work anti-aircraft units, freeing men up for other combat details.

The Ack Ack teams are high risk assignments, targeted by enemy bombers and fighter planes. Ack Ack Girls must be courageous and quick-witted. Ava Armstrong is excited to be chosen to be among them. Her anti-aircraft unit borders a major RAF base where several squadrons of pilots are deployed. Chris Fairfield, who earned a Distinguished Flying Cross in the Battle of Britain, is one of pilots stationed by Ava’s unit.

When Ava and Chris’s paths cross, sparks fly. War lends an urgency to life and love. Their romance grows deep and strong despite the danger that surrounds their daily lives. After the men in Chris’s squad see his plane get shot down, Ava is told he went down in flames and cannot have survived.

Logic says the men who were with him that day are right in believing him dead.

I was born and raised in Chicago. My father was a history professor and my mother was, and is, a voracious reader. I grew up with a love of history and books.

My parents also love traveling, a passion they passed onto me. I wanted to see the places I read about, see the land and monuments from the time periods that fascinated me. I’ve had the good fortune to travel extensively throughout Europe, the Near East, and North Africa.

I am a retired police detective. I spent twenty-five years in law enforcement with two different agencies. My desire to write came in my early teens. After I retired, I decided to pursue that dream. I write three different series. My paranormal romance series is called, Knights in Time. My romantic thriller series is Dangerous Waters. The newest is The Bloodstone Series. Each series has a different setting and some cross time periods, which I find fun to write.

I currently live in the Pacific Northwest with my husband and five wild and crazy rescue dogs.