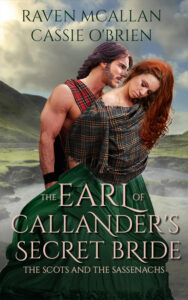 Book 1 in The Scots and the Sassenachs series

A treasonable letter. Attempted blackmail. Can a secret marriage save the day?

Duncan, the Earl of Callander, loves his beautiful neighbour Lady Cairstine McColl but has held back from proposing until she has enjoyed her debut in Edinburgh. However, matters are taken out of his control when Cairstine discovers a plot to blackmail her father with her hand in marriage demanded as the ransom price.

A daring plan is hatched. To protect Cairstine, she and Duncan will wed under Scottish law, then travel to England incognito to find and destroy a letter that could see her father accused of treason and the family ruined.

But all is not straightforward once they arrive in Corbridge.

They must hide the passion they feel for each other from the blackmailer, and worse, there may not be just one blackmailer, but two.

Lady Cairstine McColl knew it was wrong to slip out from her family home unnoticed and go for a long tramp across the hills. Nevertheless, after the news her papa had just imparted, she’d had to get away. It was that or completely lose her temper. Shout, scream and be the termagant she didn’t want to be. She acknowledged it had been a close-run thing. Hence her escape. A pity she couldn’t escape the future as easily.

She skirted the three large boulders that edged the head of the loch and jumped over the burn that flowed into it with a gurgle as it danced across the stony bottom. In winter, when it was in full spate, she would have had no chance. Now in June, when the nights were short and daylight hours long, the weather was sometimes drier and the burn no more than a trickle.

Cairstine strode up the slopes to where the forest began, her boots giving her purchase on the slippery rocks. It might not have rained recently, but these slopes were always damp and covered in moss. As she walked, she mulled over her papa’s words.

How, how could he?

He had promised her in marriage to an Englishman. An Englishman! Whom she had never met. How draconian. And how undoubtedly, in this so-called enlightened age, unacceptable. Surely she should at least have met the man and decided if this marriage of convenience was for her?

Sadly, her papa had been unmoved by her pleas. He’d simply told her she would leave for England in five days’ time.

England. Who on earth would want to go there? And to a place called Corbridge? Not even London, or Carlisle. Until she’d studied a book of maps in the library she’d had no idea where Corbridge was. Evidently between Newcastle and Carlisle. A market town, near the site of the wall built in Roman times to keep the Scots out of England. What a pity it was no longer used for the same purpose. That would have meant there was no way she could have been forced to head south.

According to a pamphlet she’d found on the desk—it seemed her papa had been investigating—this Corbridge was a pretty well set-up place with lots of new and imposing buildings sitting side by side with older, equally as imposing ones.

She couldn’t have cared less. It wouldn’t matter what it was like, it was not home.

George Armstrong, she thought in disgust. An Armstrong. One of those murdering, thieving Border Reivers of old who had thought nothing of riding from England into Scotland to steal the cattle of good honest Scotsmen—and women. The family names of the marauding bands were still notorious enough to put the fear of God into anyone who lived within a day’s ride of the border even in these modern times. Cairstine had been raised on stories of Scots venturing as far as Yorkshire, and the English to Edinburgh. All in retaliation for some real or imagined wrongdoing. You had to be thankful such days were over—but that made her papa’s demands even harder to fathom.

Worse though than the raids—if it was possible for anything to be worse—Armstrong was a Sassenach with, he was said to boast, not one jot of Scottish blood in him. Where was the common ground?

Why, oh why had her papa thought she’d be happy married to one of them?

If he had thought at all. These last couple of weeks he’d been preoccupied, less likely to chat or ask what she had been doing, and never sharing his day with her. Not at all the man she had adored for so many years.

How could he? Is he demented? When the name of her prospective husband was enough to put fear into even the bravest of people… She was no different.

She shuddered and gathered her breath for the final steep few yards to her favourite place on the estate. The lookout. Where in times gone by a sentry would have been placed to keep guard for enemies.

Now she was the only one who ever went there.

Or so she’d imagined.

Head down, deep in thought, she ploughed into a tree.

A very human tree, which swayed before it steadied again.

She scowled. Of all the people it could be it had to be Duncan Callander. Her neighbour, her…her what? She had no idea except that he was the one man who made her skin tighten in an arousing way and made her wonder…what if?

A child of the countryside, she was no stranger to the way animals mated and had on more than one occasion caught sight of a man and a woman in the undergrowth, the lady’s skirts kilted around her waist, his trews around his ankles. It wasn’t something she’d contemplated doing herself though—until recently.

“Where’s where the enemy? Who do I have to shoot?” Duncan grabbed her arm with one hand to rescue her from falling on her rump, put his other hand to his forehead and scanned the area with an extravagant movement. “Pistol or bow and arrow?”

Cairstine giggled. Trust Duncan to cheer her up. “The culprit is too far to reach with either,” she said glumly as she smoothed her skirts down and remembered what had sent her to the lookout in a rush. “In England, at a place called Corbridge.”

“Corbridge?” he said as he dropped his hand from his face. The confusion in his eyes mirrored the incredulous tone of his voice. “Why in hades Corbridge? What the hell’s going on?”

Cairstine sighed. “Hell just about sums it up. My papa says I am to marry the black-hearted devil that is George Armstrong.”

Duncan’s jaw clenched as she said the name. George Armstrong of Corbridge…the bastard! Not that he had ever met the man, but the fame—or infamy—of the Armstrong family was well known and noted in the annals of history. Around a hundred years earlier they had been given a baronetcy—under somewhat suspicious circumstances—and they revelled in their reputation.

Blood raced through his veins at the thought of Cairstine in the clutches of such a man. She stood close enough to kiss, her lips mere inches from his own. Another part of his anatomy stirred deep within his trews with an emotion other than anger. The heady scent of her teased his nostrils and he sniffed the air. Violets, he decided—sweet and seductively entrancing like the lady herself.

He dropped his hands to his sides against an urge to sweep her into his arms and assure her he would not allow the marriage to take place. He was powerless to prevent it—Cairstine’s father’s title being higher ranked in the natural order than his own. What was he, as an earl compared to a duke? Instead he concentrated on not curling his hands into fists and asked with a calmness he didn’t feel, “When and where is this event to take place?”

Cairstine gazed at him, a question written in her eyes as if she sensed the power of the emotions running through his body. “I leave for Corbridge in five days. Oh, Duncan, something is wrong, and I have no idea what it could be. I have asked Papa to explain his decision, but all he says it I have to do this thing. Why?” She whirled around and her skirts followed her, giving him a tantalizing glimpse of a well-turned ankle visible above her half boot. How he wished it showed more.

Callander, get your mind out of the gutters.

“What on earth could be going on?” Cairstine asked in a plaintive tone that hit him hard. “Duncan, I’m at my wit’s end. I cannot move him.”

Duncan nodded, his mind busy with possible plans, and he turned to one side, needing time to think of ways and means to execute them as well as considering the likely consequences. “Stay strong. I’m off to check my snares and have a think. Don’t worry, I will see you again before you go. Can you be here at the same time tomorrow?”

Cairstine nodded. “I will make sure I am.”

Duncan nodded. “Until then.” He spun on his heels and set off in the direction of his manor a mile or so distant on the opposite hill, his thoughts in a whirl.

What in hades is her father up to? To date, the Duke of Glenard, known as Lord Nathaniel McColl in these parts, had been a loving and somewhat protective father to his only daughter.

He strode on. The smell of pine resin carried on the warmth of the June breeze replaced the scent of violets in his nose, but Duncan hardly noticed as he began to gather his thoughts. A rescue plan was needed, one that would absolve Cairstine from all blame so as not to leave her in her parent’s bad graces. Or give any hint of collusion between the two of them. She should not guess his part in it, to allow her to answer with perfect honesty if questioned later by her father.

A bold idea occurred and he quickened his pace while contemplating the prospects and pitfalls of it. A disguise would be required so she didn’t immediately recognise him. It would ruin everything if she inadvertently gave his identity away to anyone with her. Plus, he needed to decide on a place of safety for her to pass the time until his plan achieved its aim.

After 30 plus years in Scotland, Raven now lives near the east Yorkshire coast, with her long-suffering husband, who is used to rescuing the dinner, when she gets immersed in her writing, keeping her coffee pot warm and making sure the wine is chilled.

With a new home to decorate and a garden to plan, she’s never short of things to do, but writing is always at the top of her list.

Her other hobbies include walking along the coast and spotting the wildlife, reading, researching, cros stitch and trying not to drop stitches as she endeavours to knit.

Being left-handed, and knitting right-handed, that’s not always easy.

She loves hearing from her readers, either via her website, by email or social media.

Being with family and friends.

Writing and having the freedom to do so now child four of four has passed her driving test and is off to uni later this year.

Any excuse to throw a party.

Any excuse to open a bottle of fizz.

Shoes in vast quantities – the higher the heel the better.

To write many more books.

To own a pair of Louboutin’s.

To never go near an iron or a hoover again.