The Love Token by Raven McAllan 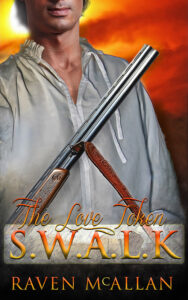 Spies, smugglers, scandals. Stealth, seduction and sex. All they had to do was decide which was theirs to take and what had to be earned. And hope they reached their happily ever after.

Jonathon, Viscount Carville, soldier, spy and would-be lover of Miss Miranda Riston, has accepted a mission to discover who is smuggling contraband into East Yorkshire. Her papa, however, is convinced Jonathon is dead, and wishes her to marry elsewhere. Miranda refuses and is delighted to find Jonathon is very much alive but working undercover on behalf of the British Government.

More is at stake than just a few shillings of tax duty owed.

Among their close friends and acquaintances, there is a traitor working against the crown on behalf of Emperor Napoleon. Danger threatens as they seek to discover the identity of their treacherous foe.

Who is an innocent pawn? And who is not all they seem?

It’s a puzzle that must be solved if they are to get the happy ever after they long for.

Miranda Riston stared at her parents in horror. Surely they must be mad? Addle-pated and, not to put a finer point on it, ready to be admitted to Bedlam. Otherwise, why on earth would they suggest such a thing?

“Do I understand you correctly?” she said with deliberate care as she did her best not to lose her temper and show herself in a less than rational manner. Even if she was of a mind to scream like a fishwife and throw things. “You think I should become betrothed to Edward Twain? Viscount Carville’s younger brother?” Over my dead body—or yours. “Never in a million years.” Apart from the fact Edward had an understanding with another young lady, he was one of her beloved Jonathon’s siblings.

The least effectual one. The one who moaned and whinged and assumed almost everyone was against him.

She wasn’t against him, but if she were honest, she had little time for his attitude and feeling of entitlement. If he had worked with Jonathon and helped to create a strong and growing family estate, she probably wouldn’t have been so critical, but as far as she could tell, he had not.

Jonathon. Who worked tirelessly for his family and country and was happy not to be recognised for all he achieved. He just, as he’d once said, “got on with what had to be done and did it without a fuss”. “Fussing”, he had added with a grin, “was so much effort for very little reward”. Unless it was over her.

If only he was there now to say the same things. She put one hand over the necklace she had worn under her gown for the past three years. The tiny blue sapphire in half of a silver four leaf clover. A symbol, he had said, of his love for her. My lover. Even if he never became her husband, he was the one man she’d given herself to gladly, and she would do so again as easily as before.

“You are nigh on the shelf. It is a good alliance,” her papa said in a ‘listen to me, I am your parent’ voice. “He is the heir, and it will cement your future.”

There had to be more to it than that. “He is not the heir,” Miranda said firmly. Why on earth did they think that? Unless they knew something she didn’t. That was not anything to bear thinking about. “Jonathon is the heir as you well know.”

The only man she would ever love. The one man who she admitted she would go to the ends of the earth for.

The man she had spent one magical night with, learning all about love and sex. How to pleasure and be pleased. How to take his cock in her mouth and lave it until he bucked under her and filled her mouth with hot salty liquid, which she had gladly swallowed. How to gently squeeze his bollocks and help him hold back his climax or come hard and fast.

Discovering how he could lick, lave, nibble and suck her nub, swirl his tongue into her channel and make her shake and scream. Then enter her, move inside her until she swore his cock swelled and reached her soul.

Sadly, to feel him pull out before he filled her with his seed. In order, he’d said, to ensure there was no child of that union. Not yet, not until he returned.

Now she wondered if it would have been better to clamp her legs around him, tighten her inner muscles and ensure he’d climaxed in her. If a child had resulted this situation would never have happened.

Or would it have? In some ways it might have given her parents what they would have seen as more leverage. Lack of legitimacy.

“Miranda?” her papa asked irritably. “Are you listening to me? You need to marry. Edward is a neighbour. It would be a good and useful match.”

“Useful?” Who on earth wanted a useful marriage? “For whom? What about Jonathon? He is, I believe, the heir, unless his mama played his papa false, and I could never see Edwina doing that.” Jonathon’s mama was devoted to her husband.

“Do not be crass,” her papa snapped. “Jonathon is to all intents and purposes dead. No one has heard from him for nigh on three years. His papa says so. Not one sighting, no mentions in dispatches.”

“No body,” Miranda said quietly. If he were dead, I would know it. Feel it. I am sure he is not. And I have heard from him. Cryptic notes, left at their trysting place every so often. No more than ‘I am safe’, or ‘I love you’, but it was enough. She’d left replies. ‘Stay safe’, and ‘I love you’. The only one she’d received that worried her had not been in his hand, nor by him. It had said simply, ‘he is safe’. She had been thankful he was but had wondered who had left it.

“Overrated,” her papa retorted. “As for a body, do you know how many were left unknown at Waterloo? Too many to mention.”

Miranda’s mama paled. “Thank you, Henry. How good to know where I stand, and your dismissing of our brave soldiers. I agree with Miranda. She and Edward would not suit.”

What on earth was going on? Why was her papa so adamant? “Papa, have you lost all our money on ‘change?”

His face reddened, and his anger was palpable. “Indeed, I have not. I want to see you married and settled. You have shown no partiality to anyone, so it is my duty to find you a husband. I have.”

“No,” her mama said forcefully. “You have found her someone you want her to marry, and no more. I told you, Henry, I begged you to reconsider but you did not. I also wonder why?”

He didn’t sound too sure.

“Papa, I’m sorry, but I do not agree and I will not agree.” It was rare she defied her papa—she loved him, and he was in general a reasonable man. What maggot had got into his head and given him this irrational idea she couldn’t think. Whatever it was, she disagreed vehemently.

“Nor do I think it sensible. Or rational,” her mama said. “Henry, you may not love me, you may indeed choose to disown me, but I have always loved you and admired your sense of honour. This is not honourable. We always said we wanted Miranda to have what we have. Or,” her mama corrected herself, “what I thought we had. It appears I was wrong.”

Her papa appeared horrified. “My dear, how could you doubt I love you? I have since the moment I set eyes on you.” His anger disappeared as fast as it had arrived. “I spoke in the heat of the moment. Miranda has a fortune. We do not want fortune hunters sniffing about. I worry for her.” He turned to his daughter. “Miranda, I just think that if you did love someone you would be wed by now. I haven’t noticed you show any partiality towards any of the gentlemen you’ve met, so I would be failing in my duty not to suggest someone.”

“As long as that person was around, you would see my partiality,” Miranda said softly. Luckily, it appeared no one heard. She wasn’t prepared to share that information. Not then, maybe not ever, and she had no idea why.

“Papa, you did not suggest. You insisted,” she said instead. “At the risk of being rude to my elder and better, I’m not wed, and I will not marry Edward,” she added firmly. She grinned for a second before the seriousness of the situation hit her once more. “We would not suit at all.”

“Nor will he and the Amble chit,” her papa said. “She’s no future Lady Twain, or an eventual Viscountess Carville. Edward’s papa will not allow it.”

“Henry, come with me, and let us talk about all this,” her mama said as she took her husband’s arm and began to propel him out of the room. “We have to listen to Miranda.” She winked at her daughter. “And let her marshal her thoughts and reasons.”

They left the room.

Miranda let her breath out in one long whoosh. “Of all the stupid, awful, arrogant, idiotic, insane, asinine ideas…”

“I totally agree. Lock the door,” a familiar voice said from outside the open window.

After 30 plus years in Scotland, Raven now lives near the east Yorkshire coast, with her long-suffering husband, who is used to rescuing the dinner, when she gets immersed in her writing, keeping her coffee pot warm and making sure the wine is chilled.

With a new home to decorate and a garden to plan, she’s never short of things to do, but writing is always at the top of her list.

Her other hobbies include walking along the coast and spotting the wildlife, reading, researching, cros stitch and trying not to drop stitches as she endeavours to knit.

Being left-handed, and knitting right-handed, that’s not always easy.

She loves hearing from her readers, either via her website – https://www.ravenmcallan.com/, by email or social media.