The Rule of Three by Kristian Parker 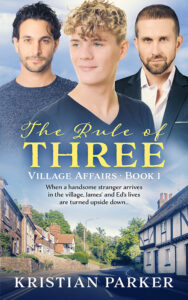 When a handsome stranger arrives, James and Ed have to make a choice that will change their lives.

James Durkin is happy. He’s landlord of the pub, chair of the parish council and secret lover of his best friend, Ed Cropper. But Ed, tired of living in the shadows, dreams of living openly, something James can’t contemplate.

Then there’s Arthur Whittaker. When the handsome young primary school teacher comes to live in the village, he signals a future that neither James nor Ed ever saw for themselves.

But the small Yorkshire village of Napthwaite is a place that’s resistant to change, meaning the three men must be strong enough to forge their own path…

Will they overcome the odds—and tradition—to find the love they crave, or will their brave new world crumble to nothing under the pressure?

Disco music blasted from the float passing by, and the crowds jamming the pavements dancing and waving in the spring sunshine cheered as a drag queen belted out Holding Out For A Hero at the top of her lungs.

A six-foot-tall man dressed as Wonder Woman threw a condom directly at Ed Cropper It ricocheted off his head and fell straight into his beer.

She disappeared into the crowd, soon to be replaced by a marching band in stockings and suspenders. The parade waited for no one.

Ed fished the rogue item out of his beer and slid it into his shirt pocket.

James Durkin wrapped his arm around his shoulder. “Could you be any more Yorkshire? Waste not, want not?” he asked, laughing.

Ed leant into the hug, the throng of sweaty bodies pushing them together and the overwhelming smell of poppers permeating through the crowd. It only ever gave him a headache. He wondered what the hell anyone was doing sniffing them in the glaring Spanish sun.

“Ah, guapo, guapo,” shouted another drag queen, resplendent as Ursula from The Little Mermaid. She made a beeline for Ed and James, kissing them both on the cheeks before plunging their faces into her bosom.

They gasped as they came up for air and she blew kisses.

The parade tailed off, leaving the crowd to disperse. Every bar had rainbow flags and cheap shots, but several years’ experience had taught Ed that Maspalomas Pride was a marathon, not a sprint…although the glint in James’ eye said he’d happily hit the booze.

“Right. Come on, you,” Ed said. “Let’s get some supplies and have a disco nap. Keep your strength up.”

They broke off from the crowd and wandered down an alley towards the apartment they’d rented. It was so close to everything that they’d snapped it up the second they’d come home last year.

James put his shirt on and walked with a spring in his step. Ed caught sight of them both in a boutique window. The drag queen had been right. They did make a handsome couple. Six-foot-three James had piercing blue eyes, a receding hairline that he shaved and lightly tan skin. Ed, on the other hand, had long dark curls, a beard and an even deeper tan from working outdoors most of his life.

Once inside, the cool relief in the supermarket made Ed gasp. It had been so hot in the middle of that crowd. James stood by the huge fan, letting his shirt billow behind him.

“What are you like?” Ed chuckled, picking up a basket and starting to think about what they needed.

James followed him up the aisle. Ed picked up some juice and bits to snack on. He absolutely refused to turn the cooker on in the apartment, but they had to survive, didn’t they? He turned and saw James holding up eggs, bread and cheese.

“Please can I have your French toast for breakfast?” James asked with his pathetic puppy-dog face.

Ed sighed. “Not a chance, buster. You can take me out for French toast.”

James slowly dropped the items in the basket. “But no one makes it like you do. You’re the best French toast chef this side of Paris.”

Ed couldn’t resist those eyes. “Fine, seeing as it’s you.”

“Thank you, Eduardo,” James said with a wink. “I’ll make it worth your while.”

It made Ed cross when James called him that and he bloody knew it. “Will you now?”

“Then you’ve definitely got a deal.”

Ed went to kiss him but leapt like a scalded cat as James put a hand on his chest and pushed him away.

“What are you doing?” James whispered, checking around the deserted aisle to see if anyone had seen them.

Ed’s chest still stung from where James’ fingertips had rejected him. “Nothing.” He continued walking up the aisle but could sense James wasn’t following him and spun round. James had that confused face he used to pull in primary school when asked a particularly difficult question. Ed had found it adorable then and he still did.

“What is the matter with you?” James asked calmly.

It drove Ed mad that he never seemed to lose his cool. Ed threw the basket down on the floor with a clatter. “Ten minutes ago, you were happy to kiss a drag queen and take your shirt off. Now you push me away?”

James snatched up the basket. “Are we having an argument in the fucking shampoo aisle?”

“No, James. We couldn’t do that because someone might hear us,” Ed replied and stormed past him and out of the shop.

Tears were threatening to escape as he dashed across the busy street and down another alley which led to their apartment. He had the key and let himself into the dusty stairway where they’d kissed on nearly every step after they’d got home the night before.

Today he stomped up each one, desperately trying to leave his anger on them but only feeling more uptight the higher he climbed. By the time he got inside, the tears had gone and he paced the apartment. James would be here any minute and Ed really didn’t want to ruin the holiday by having a row.

He grabbed a beer from the fridge and walked out onto the balcony. The dull thud of the dance music from the huge party a stone’s throw away swept across the rooftops. Gaggles of men would be dancing in each other’s arms. Not afraid of anything.

Ed had always known he was attracted to men, but there had only ever been one he’d truly wanted. The man charging across the street below with a bag of shopping. He took a long slug of the cold beer and waited for the intercom to sound. It didn’t take long before the harsh buzz filled the room. With a sigh, he wandered over.

“Are you going to let me in?” James’ crackly voice questioned him.

Ed pushed the button and replaced the receiver. As a couple, they weren’t the type to be constantly arguing and making up. They achieved this mainly as Ed did everything he could to keep the peace. He hated confrontation. It upset him and he’d replay it over and over, long after James had forgotten about it.

But he’d started this one and now James’ footsteps echoed on the stairs. He would soon be wanting answers and Ed just wasn’t ready to have the conversation he’d been practising for a while now. He went out onto the balcony again. James had a habit of filling a room and could be totally overpowering. Ed had always been more the type to shrink and marvel at how James could find a way to talk to anyone.

James came through the wooden panelled door and threw the shopping bag down onto the glass dining table. “Are you going to talk to me?” he asked, joining Ed on the balcony. He took his beer from his hand and had a swig.

Ed got up and padded inside. James’ eyes bored into him as he got another drink from the buzzing fridge. It annoyed him that James had left the door open. He worried about mosquitos getting in, but the look on James’ face hadn’t lessened any and he thought it best to leave it for now.

Ed went back outside and sat on the rickety old chair. “Why couldn’t you kiss me?” he asked eventually.

“You know why,” James said, leaning against the railing. “What if someone sees us?”

Ed threw his hands up in the air. “We’re miles away from anyone we know. And who cares if they do?”

But what if it’s mine? Ed couldn’t face carrying on this conversation. They had dinner plans for the evening and he had no intention of eating with a cloud hanging over them. “Fine, whatever. I’m sorry I caused a scene. It just hurt me, you know?”

He got up to put the shopping away. James grabbed hold of his arm and drew him inward, wrapping his arms around his shoulders. Ed could smell the citrussy aftershave James had bought at the airport. It worked well on him, and he allowed himself to be drawn into a hug.

“You daft bugger. I love you no matter what. I wouldn’t do anything to hurt you and I’d bloody kill anyone who did.”

Feeling the strong arms resting on his shoulders made everything all right again. It always had.

“Come here,” James said with a glint in his eye.

He moved Ed so he faced out to the whole of Maspalomas and stood behind him, lifting his arms like Leo did to Kate in Titanic.

“I bloody love this man,” James shouted, almost deafening Ed in the process. “I always have and I always will.”

A few people down below cheered. James spun him around and planted his lips on his. “There you go. Happy now?”

With that, he went inside and busied himself putting the shopping away. Ed watched him, marvelling at how pleased with himself James seemed. But the nagging doubt inside Ed still gnawed away at him. James had done it to keep him sweet, not because he wanted to. This secret love affair seemed to be all James wanted. A week in the sunshine every year then sneaking around the village they lived in for the rest of it.

Ed sighed and tried to shake the feeling that had been creeping into his mind for months.

The feeling that this…wasn’t enough for him anymore.