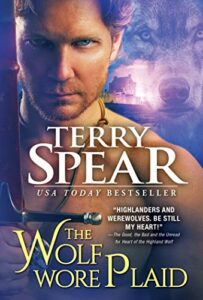 Heather MacNeil has never backed down from a fight. So when some shady shifters from a neighboring enemy clan come looking for trouble, she refuses to feed their satisfaction. There’s only one wolf that makes her go soft…

For packmate Enrick MacQuarrie, the work as second-in-command never ends—as the feud ignites, clan security is more vital than ever. But a certain unpredictable, feisty Highland lass is determined to stand up to the aggressors, and Enrick is equally determined to protect her.

The action builds as Heather and Enrick grow closer, but will they be willing to sacrifice their wild friendship for true love?

USA Today bestselling author Terry Spear has written over sixty paranormal and medieval Highland romances. A retired officer of the U.S. Army Reserves, Terry also creates award-winning teddy bears that have found homes all over the world, helps out with her grandbaby, and she is raising two Havanese puppies. She lives in Spring, Texas.

“We’ve heard so much about your shop that we had to come and check it out,” Robert said, leaning against her counter.

She didn’t believe him for an instant. Her phone was sitting on the ledge below the high counter and out of his sight, so she started to text Ian to see if he could send some backup, other than her three brothers—Oran, Jamie, and Callum, who would just as likely kill the men and ask questions afterward—if she needed the help.

The doorbell jingled again, and she looked up to see who it was, afraid it would be more of the Kilpatricks’ kin. Instead, Enrick MacQuarrie pulled the door closed behind him, and a bit of relief washed over her. Now he was a welcome sight. Not for his supposed interest in dating her. That was so far-fetched, she couldn’t believe Lana would even think it. But Heather knew he would be all protective when it came to her or any other she-wolf of the MacNeill pack.

She didn’t send the text message to Ian, figuring Enrick would deal with the Kilpatricks if they gave her any trouble.

Not that she was totally reassured. Anything could go wrong, and she sure didn’t want Enrick hurt either.

He looked so much like one of the men wearing a New York T-shirt while they waited for their steak pies that he could have been his double. Ever since Guy McNab had made it big as a film star in America, Enrick had been mistaken for him whenever he ventured out of the area.

Enrick was the middle triplet brother of Grant and Lachlan MacQuarrie, tawny-haired and good-natured—except if he was defending the pack members or his friends, then watch out. He had a warrior’s heart, yet Heather had seen a real soft side to him too—playing tug-of-war with the Irish wolfhound pups, chasing the kids around the inner bailey in a game of tag, growling as if he were a wolf in his fur coat and making the kids squeal in delight. She’d seen him playing with his brothers as wolves and he was totally aggressive then, not wanting either of his brothers to win the battle between them. And in a snowball fight, he was the fastest snowball maker and thrower she’d ever seen. If they played on teams, she wanted him on hers.

So he did let his hair down, so to speak, with the kids and with his brothers and others. With her? He clearly thought she was trouble.

At least he was a wolf with a pack friendly to her own, and she smiled brightly at him, glad he was here in case she needed him.

There was no smile for her, his look instead dark and imposing as he glanced from her to the Kilpatrick brothers, still trying to figure out what they wanted to buy. She hoped Enrick wouldn’t start a fight. They had so many customers, and she didn’t want to see a brawl break out in front of them. It surely wouldn’t help business.

Robert pointed to the sign on the wall listing the kind of pies they sold. “We’ll take a couple of the steak and kidney pies to go.”

Okay, so they weren’t causing trouble. Yet. They hadn’t noticed Enrick’s arrival, and she hoped he wouldn’t cause things to get ugly when the other men were behaving…for the moment. Enrick was observing them with a do-anything-I-don’t-like-and-you’ll-die look.

Robert leaned against the oak countertop. “We hear there’s supposed to be a movie filmed at one of the castles nearby.”

As her heartbeat quickened, Heather’s gaze darted to Enrick’s, and he raised his brows at her. Man, she was about to give the secret away in that one little glance at him. She knew he would question her next, once the men left. He could probably hear her heart suddenly beating way too fast.

“We had a movie filmed at our castle a few years back, but that’s it.” Heather placed their order with Rush stamped on it. She’d never used the stamp before, but this was certainly one of those times it came in handy.

“Not that film. A new one. More of a…fantasy,” Patrick said, “featuring wolves, even.”

“At the MacNeills’ castle? No,” she said, shaking her head. She wasn’t lying. Ian MacNeill swore they would never have another film shot at their castle. At the time they’d been in dire straits financially, and the only way to keep the castle solvent was to do the film. Wolf packs had to keep their identity secret. Having tons of nonwolves traipsing through Argent Castle and the grounds could be problematic. Her pack had had to send a couple of newly turned wolves to stay with the MacQuarries, just so the human cast and crew wouldn’t have the surprise of seeing the newbies shift during the full moon.

‹ The Nightborn by Isabel Cooper › The Restless Cowboy By Megan Ryder