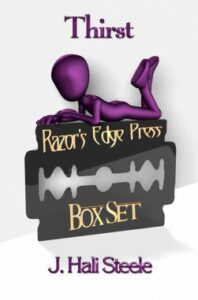 Thirsty: Monique has finally found a place where she can live out her fantasies. Little does she know the den of iniquity she’s walked into is more than just a theme club. Omen’s is the playground for every type of monster in the world.

A Thirst to Die For: When Nolan gives life to Amanda’s carnal fantasies, his own life changes. Hell is coming to pay him a visit, and he’s about to lose control.

Bane of Existence: One night spent in a human woman’s arms brought Bane, a son of Satan, as close to heaven as he’ll ever get. Now the only way he can have Iris is to convince her she wants him as much as he needs her.

A Vampire’s Thirst: Once Nolan gave all souls moderation in everything. He was good at his job, and he called heaven home — until he fucked the wrong seraphim! Now he’s a vampire slayer serving the devil, keeping an eye on Omen’s, and babysitting Lucifer’s son. Not a job he expected to hold for damn near eight hundred years…

Publisher’s Note: Thirsty, A Thirst to Die For, Bane of Existence, and A Vampire’s Thirst were previously published as single titles.