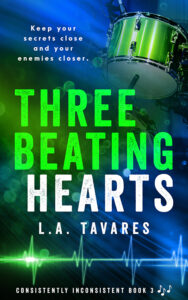 Book 3 in the Consistently Inconsistent series

Keep your secrets close and your enemies closer.

Dominic Trudell has been Consistently Inconsistent’s drummer since the band’s conception. He keeps to himself, separates his regular life from his fame, is brilliant beyond measure and is a self-proclaimed bachelor. He has never said ‘I love you’ and has no intention to start now.

When Stasia Marquette joins Consistently Inconsistent, there is only one rule—no inter-band relationships. Dom, who isn’t known for dating or breaking rules, is doing both.

She’s captivating him in ways he can’t explain, but he doesn’t do love—never has—and she wants more than he can give her.

While he’s pushing her away—more for her own good than his—she finds herself tangled up with someone from Dom’s past, and that man knows that Dom keeps secrets as well as he keeps time.

Dom tries to keep his backstory hidden, while the band will do anything to stay on the charts. Can they stay relevant—or is it time for them to take their last bow?

Reader advisory: This book contains references to heart disease and blackmail. It is best read as book three in a series.

Green signs with white text reflect the names of familiar streets as the tour bus flies underneath them.

Twelve pages, I think as I peek at the last page number of the book I hold. Only a few exits from home and I’m a dozen pages short of finishing the story.

“Did you do it?” Theo sits down in a chair nearby and sips from a beer bottle. “Did you get through all fifty?”

“Almost.” I hold up the book but keep my eyes on the text, trying to finish before we reach our destination. “I’m a bit short right now, though.”

“What number is this one?” He leans forward and flicks the cover.

“Forty-eight.” I shrug. “But unless I can finish this one and two more in the next fifteen minutes, I’d say I’m not reaching my goal.”

“Technically.” He takes another sip between words. “We’ve still got the Boston shows. The tour isn’t over yet, so you’ve still got time.” He winks as he stands and heads toward the back of the bus. I bury my face in the text.

As the bus pulls into our drop-off spot, my bandmates holler and cheer, kicking off the usual welcome home parties they throw themselves upon arrival. They will get off this bus almost before it even comes to a full stop and hop from bar to bar until last call, then open the doors to their own homes, where they will continue to drink until the sun comes up, sleep the day away and not wake until we’re required to be at the venue for our home shows.

We close every tour at home. Sometimes it’s one show, sometimes it’s three. The number of shows and the Boston venue we play at varies, but our traditions upon returning don’t. They will launch our home stretch with their inhibitions off and their ‘check liver light’ on. Some things never change, no matter how much we’ve grown. My bandmates always revert back to their wild youth years the moment the tour bus wheels hit Boston’s pothole-filled pavement.

“Planning on staying the night?” Xander hits me on the back of the head in an annoying but playful way as he passes me. “We’ve been parked for a few minutes now.”

“I only have a few pages left. I’m surprised it’s taken you this long, though. You’re usually halfway down Boylston Street by now.”

“I forgot my sunglasses. What is that, anyway?”

He smiles and shakes his head, but I can’t tell if the no motion is sincere or sarcastic.

“I’m headed out. You sure you don’t want to come?”

I’ll say ‘no’ and he will tell me that I’m missing out. The tour bus final scene never changes.

“You ask me that every time.” I peek up at him over my glasses and the top of my book. “I’m good. I have somewhere to be.”

“You say that every time.” He shakes his head and puts his sunglasses on.

“You say that every time.”

We laugh a light sound at our exchange. It’s not the first time we’ve had this conversation. For as long as we’re touring, it won’t be the last. He turns to head off the tour bus.

“Xander?” He turns and looks at me, though his gaze is hidden behind dark lenses. “Be careful. Take care of yourself and the boys. I know I don’t partake in the crazy sideshow that you guys put on when we return home, but I do care. Get everyone home in one piece.”

Xander pushes his sunglasses into his in-desperate-need-of-a-cut hair. “You say that every time.”

He slides his sunglasses over his eyes once more and retreats from the bus.

When it comes to romance, L A doesn’t have a type. Sometimes it’s dark and devastating, sometimes it’s soft and simple – truly, it just depends what her imaginary friends are doing at the time she starts writing about them.

L A has moved to various parts of the country over the last ten years but her heart has never left Boston.

And no, the “A” does not stand for Anne.