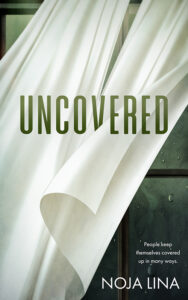 People keep themselves covered in many ways. But, sometimes, it’s not possible—and someone’s looking.

Jake postpones buying curtains for his new apartment. At one point, he notices that a man from the building across keeps watching him every morning. Jake then confronts the guy, whom he considers a stalker.

Thomas is not actually a stalker and is put off by Jake’s aggressive tendencies. Even so, they continue interacting and a bond starts forming. Jake develops romantic interest in Thomas but refuses to admit it and struggles with getting them to be closer. Along the way, he discovers that Thomas hates aggression because he had dealt with domestic violence in his past.

They both need to overcome their respective fears and change. Will they succeed—or fail and fall apart?

Reader advisory: This book contains discussion of stalking, mention of suicide, descriptions of physical, emotional and metal abuse, and discussion of a main character’s history of abuse.

Jake liked the new place he had rented at the start of his first year in the master’s program. It was a small, one-room apartment with a kitchen and a bathroom on the fourth floor of an old building on the eastern side of Thornburg. The neighborhood was packed with tall buildings, narrow streets and large supermarkets, but Jake was among the lucky residents whose view included a yard with a couple of trees among all the other concrete structures.

His new place was only five bus stops away from Thornburg’s center, where Jake would get off and walk an extra ten minutes to get to his college. Buses ran frequently in his new neighborhood and, even when Thornburg experienced the levels of traffic it was renowned for, it still wouldn’t take more than twenty minutes for Jake to get to the city center.

Thornburg was also famous for its high rent and housing prices, but Jake had managed to score a living space with a lower-than-average rent for the type of place it was. So, with his current budget and needs, the newly rented lodging was ideal for him.

Since he had lived in the student dorms up until that point, he didn’t have many things. Cleaning supplies and utensils, dishes, some appliances and other such things had been shared with his previous roommates in the dorm. As such, they were currently missing from his apartment. He really needed to go shopping.

Jake also didn’t have curtains, so he needed to add those to his shopping list, too. But, since buying all the stuff at once would leave him starving until his next paycheck and there wasn’t really any certainty when that would be, he prioritized buying only the things he really needed and only when he really needed them.

And so, one month after his university year had started, Jake still did not have curtains.

The building opposite from his was fifty meters away, separated by the yard where people walked their dogs and kids played hide and go seek. That building was positioned in such a way that Jake could easily see inside the homes on the third, fourth and fifth floors. Of course, the reverse was also true, and someone from the opposite building could see inside Jake’s apartment, especially with him not having any drapes or curtains.

This didn’t bother Jake, and he changed clothes in his room with complete disregard to the fact that someone might see him during this daily activity. Whenever the thought entered his mind, he immediately dismissed it, thinking that most people had better things to do than watch a random guy changing and doing stuff inside his own place.

That was, until one morning when he was proven wrong. Jake had just taken off the T-shirt he had slept in and gone over to the windowsill to get the camera he had left there. Looking out through the window, he saw a guy around his age, sitting on the threshold of his balcony on the fourth floor of the opposite building, smoking a cigarette and looking directly at Jake as he was doing so.

Jake challenged the other guy with his gaze, but the latter seemed completely unaffected as he continued to look at Jake, barely even blinking. If the other guy had shown some kind of aggravating reaction—or even any reaction at all—Jake was ready to shout, show the middle finger or do something else that would aggravate the other guy in return. But, as there was no reaction, Jake had nothing concrete to go on. For all he knew, the man could just be staring into space and it only seemed like he was looking at Jake. So, Jake stepped away from the window to finish his business, forgetting the incident had ever happened by the time he reached the bus stop.

The next morning, he remembered it and, out of curiosity, looked toward the opposite building to see if the guy who had been potentially staring at him was still doing it. He was.

Again, he was sitting on the threshold, smoking a cigarette and looking straight at Jake. Again, Jake itched to do something to make him back off, but he was running late, so he postponed doing anything about the matter.

On the third morning, the guy wasn’t there, and Jake thought he may have jumped to conclusions too soon. So, he made a mental note to better control his aggressive reactions until he was sure he had good reasons for having them.

The fourth morning came, and Jake saw the other guy again, staring at him with a blank expression. Jake forgot about the mental note he had made, went out on his balcony shirtless, crossed his arms and glared at the guy. He was confident in his ability to be intimidating and to keep it up until either the other person lost their nerve or until Jake lost his cool. However, the guy proved to be a considerable opponent, as he never once turned his gaze away or changed his expression. Three minutes passed like that, and the annoyance building up within Jake was going to soon make him drop the glaring for something more impactful. But, then, the other guy showed a faint smile, looked at his wristwatch, put out his finished cigarette, stood up and waved to Jake before entering his apartment.

Noja lives in Romania, specifically Transylvania. When she’s not working at her full-time job or working on one of her stories, she enjoys her one-sided love relationship with various forms of Asian media, enjoys adding another cooking fail to the collection and hanging out with friends over a cold beer.