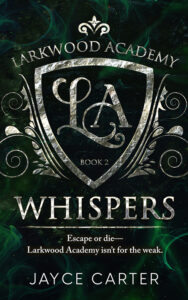 Book 2 in the Larkwood Academy series

Escape or die—Larkwood Academy isn’t for the weak.

When I first arrived at Larkwood Academy, I was sure someone would rescue me. After months here at the mercy of the guards, the other residents and even the Warden, I’ve realized the only person who can save me is myself.

In order to escape, I’ve teamed up with three other shades—Wade, a young and carefree void, Knox, an incubus afraid of his own powers, and Brax, a berserker who seems to hate me as much as he wants me. Meanwhile, we have to hide our plans from Deacon, a guard who isn’t quite human or shade, and Kit, an adjunct professor with a terrifying power and far too much connection to the Warden.

Even as I uncover the truths behind the secretive and dangerous North Tower, as the Warden takes an ever-increasing interest in me and my powers and as I search desperately for a way out, I realize there is only one option.

Escape or die, and I’m not ready to die…

Reader advisory: This book contains scenes of incarceration, violence and assault. There are also references to inadequate parenting.

I never missed my voice more than when Deacon touched me, when I opened my mouth and wanted to moan his name.

Sure, there were other times it annoyed me—when I wanted to tell someone off, when I wanted to explain myself, when I just wanted to be heard. Those times irked, but the loss never bothered me as much as when Deacon teased his lips over my breast, when the lack of noise from me made it feel incomplete.

Not that Deacon seemed to mind—or perhaps it was better to say he could make up for it easily. He might not have been the most vocal man in his normal life, but that all changed in bed.

I looked around for a moment, noting the quiet corner of a shed in the yard where we’d tucked ourselves away. Maybe bed is a stretch…

We couldn’t risk people catching on to us, which had left us finding out-of-the-way spots like this for our little rendezvous. Neither of us wanted to turn into a weakness for the other.

“I missed you,” Deacon whispered in his low, rough voice against my skin, his breath warm and rapid.

I loved these moments, how he lost that composure he usually had, how he seemed like anyone else. Normally Deacon was bigger than life, a guard at Larkwood Academy who even the other guards feared and distrusted.

In these moments, though, he wasn’t any of that. He was just mine.

I set my hand on the back of his neck and brought him closer, pulled him to my body until I could use my lips to try to tell him the things I couldn’t say with my kiss.

He groaned against my lips, then grabbed my thigh to pull it around him. My ass pressed against the small table I sat on, but I didn’t care about anything. Not splinters, not discomfort, nothing but drowning myself in these rare moments of happiness.

I’d lived at Larkwood for months and had mostly accepted the brutality that made up my world now, but that made these moments even more important. When Deacon touched me, when he growled into my ear, it made the rest of the ugliness of my life drift away.

He sank his cock into me, and I dug my nails into his back. It always gave me this wonderful burn when he took me, when I could feel entirely filled by him.

So I lost myself in him, in his strength, in the rough whispered praise he offered. Too soon, it ended. Too quickly, I wiped off and pulled my sweats back on, brushing my hair with my fingers to appear presentable. We never had much time, never got to indulge in the quiet happiness normal people could when they enjoyed languid motions and gentle kisses through the night.

Deacon buttoned his pants, his expression having shifted back to the usual closed-off one he showed to everyone else. No doubt that was one reason I so cherished the times we had, because they were the only chances I got to really see him.

“You need to be more careful,” he muttered.

I turned toward him, furrowing my brows.

The zipper of his pants was loud in the quiet shed. “You’ve got guards watching you. Warden put out a memo to keep a close eye on you. You think they don’t know you’ve been meeting up with those delinquents you seem to think are friends?”

I pressed my lips together and narrowed my eyes. Of course Deacon didn’t care for the other connections I’d made—he considered all the shades dangerous, so he saw any other resident as a risk to me.

What he didn’t understand was that everything was a risk to me. The whole damned world seemed to want to take me apart, to pull me to pieces until nothing was left.

He came forward and set his hand on the back of my neck, angling my face so I looked right into those bright purple eyes of his. Those eyes had ushered me into my new life at one time, but they meant so much more to me now. “I don’t want to lose you, Hera. You can’t trust anyone, can’t let your guard down. Whatever they’re talking you into, it’ll get you killed.”

I set my hand on his chest and pushed. He didn’t move because of the pressure I applied, but because he chose to. I could have used my powers, my ability to control sound waves, but I tried my hardest to keep that hidden. I’d finally gotten to where I didn’t do it on accident, so I kept it on a tight leash. While he’d witnessed that skill, he had no idea of the extent of it.

“Nothing to say?” Anger flashed across his features, but I didn’t fear him. I knew him too well already, knew he’d never hurt me, at least not on purpose. Sure, he was a guard at the very place holding me captive, but he did all he could to protect me.

“No one makes me do anything,” I signed to him.

“You’re too naïve,” he snapped. “You think I don’t know they’re trouble? That they’re looking for some magical way out? Look, this place has stood for a long damned time, and no level-one shade has ever escaped. A lot of them have died trying, though. I don’t care how good a friend you think they are, they’ll let you take the fall if it benefits them at all.”

Deacon’s words were callous but not unexpected.

We’d done this for weeks, ever since I’d left solitary after being caught breaking into a file room. Deacon was smart enough to know I was up to something, but pushing too much might just end up making me a bigger target. It had driven a wedge between us, one that hurt more than I liked to admit.

I hated having to separate my life, to keep things from all the people around me, but I didn’t have a choice.

Deacon couldn’t find out about the plans I had with Wade, Knox and Brax, and the three of them couldn’t know the extent of my relationship with Deacon.

Though I had a feeling all the men in my life had made wrong guesses about one another. It was in the looks, in the aggression they all showed when talking about each other. No doubt each of them assumed I was sleeping with all the others in my life.

Though…not because of lack of effort on my part.

It just turned out romance was as foreign a concept to me as the economics of other countries and how football worked. Getting people into bed was much more difficult than I’d have ever imagined. I recalled all the times I’d heard as a teenager how boys were animals who only wanted one thing, how I had to be careful as a woman or I’d get taken advantage of.

Yet most of these men were not taking advantage of me in the way I wanted them to, no matter how I tried to tempt them.

Not that telling them that would matter. Deception was a way of life here at Larkwood, and we all had our secrets.

“I’m not trying to fight,” he assured me, despite the aggressive tone of voice that he used almost exclusively for fighting. “I just worry about you. I’m afraid I’ll open my email and see your name on the North Tower list. I don’t want that.”

To be fair, neither did I. Despite the fact that the North Tower seemed my only real escape option, I wasn’t ready to face that horror just yet. I needed a better plan, more information—anything to give me an edge.

But it wasn’t as if I could admit any of that to Deacon. If he discovered any plan for escape I had, he’d just ruin it to protect me.

So I had to keep that all close to my chest and play dumb. “You don’t need to worry about me.”

He made a soft sound low in his throat, as if he couldn’t believe what an idiot I was. “Of course I do. You’re trouble, Hera, and you attract trouble like a fucking magnet. Don’t forget, I was the one who saved you that night when you changed. I saw it all. I know exactly how much you need someone worrying about you.”

I dropped my gaze at the painful reminder. If it wasn’t for him, I’d have died on that parking structure floor. I’d have bled out because of the man who had slit my throat, the one who had taken my voice.

Instead, Deacon had heard my scream, had come and saved me.

Then he’d brought me to Larkwood…

It was a complicated relationship.

He reached forward again, but he didn’t touch my cheek. Instead, he touched the scar at my throat, the whole reason I couldn’t speak. “You almost died. This happened because the world didn’t like what you were. I saved you that time, but I’m terrified I won’t be able to the next, that you’ll do something stupid and end up in a situation I can’t do anything about.” His words were so soft, so sad that they took me aback.

I forced myself to stare into his eyes, to witness the pain and fear there. For all Deacon’s faults—and there were a lot of them—he wasn’t a bad man. He wanted the best for me.

It was an impasse I didn’t know how to fix.

“I don’t want to see you get finished off because you want to escape,” he whispered.

I forced my hand up so I could sign back. “I’m not planning anything.”

‹ Screen Shots by Will Okati › Contract Season by Cait Nary