Wolf After My Own Heart by MaryJanice Davidson 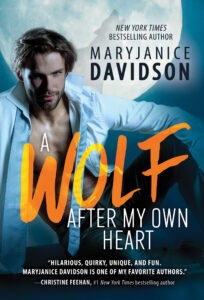 Things are hot and getting hotter… Escape into this delicious shifter romance from bestselling author MaryJanice Davidson.

Oz Adway is a rare breed: an accountant who wants to get dirty. He’s a wolf shifter working for the Interspecies Placement Agency so it’s not long before he gets the opportunity to break out of his boring, safe office job. He volunteers to find runaway bear cub Sally Smalls, recently orphaned by a plane crash. Piece of cake, right? Unfortunately, Sally’s taken refuge with “ordinary” human Lila Kai. Lila has no idea what’s going on, but she’ll destroy anyone who tries to take the cub. Oz is not about to let a human jeopardize his daring career move, no matter how attractive he finds her.

Lila knows something’s different about the sexy weirdo who keeps popping up in the wrong place at the right time. She’s determined to figure out what, regardless of the escalating threats to her safety and Oz’s distracting hotness. She didn’t move into a cursed house and take in a werebear just to run when things get complicated. Together, Oz and Lila will prevail! But only if they can keep their hands off each other…

MaryJanice Davidson is the NYT and USA Today best-selling author of the UNDEAD and UNWED paranormal romcom series. Her books have been published in over a dozen languages and have been bestsellers worldwide. A former model and medical test subject (two jobs that are close than you’d think), she lives with her family in St. Paul, MN.

She was just getting the hang of the ambulance when she hit the wolf.

The thing was bulky and difficult to control (the ambulance, not the wolf), and whenever she got it back from its semiannual mechanically induced coma, it took her a few minutes to get the hang of driving it again.

She stood on the brakes

and braced for the double-thump of the tires running over the animal, which didn’t come.

Lila Kai collapsed back into her seat, her heart pounding so hard she could taste metal. She pulled over to the side of the street. A street, not a country road on the way from nowhere to somewhere. This was Lilydale, not Hastings. And even Hastings didn’t have wolves in their streets. Just deer. So what the hell?

She put the ambulance in Park, kept the engine running, and hopped down. She checked the headlights—nothing. The side of the road—nothing. She even took a tentative couple of steps into the brown brush lining the ditch

—nothing. No wolf, limping or otherwise. Or…coyote, maybe?

Which made sense, now that she thought about it. Because whatever it was, it hadn’t been just huge, it had been fast, too. It had come out of nowhere and to nowhere it returned, all in the space of half a second. Maybe she just clipped it.

Is that a metaphor for something? Life? Death? Taxes? Transitions? Romance?

Mmmm…probably not the latter. There was just no way to twist clipping a random wolf into an allegory about her nonexistent dating life. The fact that she’d given even half a second of thought to that was proof that she needed to lay off the Cosmos (the drink and the magazine).

She went back to her decommissioned ambulance, rebuckled her seat belt, put it in Drive, checked her rearview, ignored the urge to ponder more metaphors-that-weren’t, then pulled out, and headed back toward her rental house. The adrenaline rush had been unwelcome as always, but—

Two kids had darted out from nowhere

(what the hell is up with this street?)

and were flagging her down, waving their little arms around so fast they looked like little bony windmills in a gale.

This time, at least, she didn’t have to stand on the brakes, and once she had stopped, she rolled down her window. “What’s going on, li’l weirdos?”

Both children were gesturing frantically. “C’mere, you have to help, she’s hurt!”

And more than a few horror movies start like this, too.

Again with park, unbuckling, opening door, climbing out. The boy and girl who had jumped in front of her looked like they were about eight, dressed in the de rigeur kid gear of jeans and sweatshirts and battered sneakers. They had the corn-fed reddish-blond looks of many Minnesotans. “Who’s hurt?”

“I dunno, she just is, we found her, come on. Bring your ambulance gear!”

“It’s not an ambulance.”

“No, I mean it’s decommissioned, so it’s not really an amb—”

Tiring of her explanation, the girl seized Lila’s hand and started hauling her up the street. Lila looked behind her, half expecting to see the wolf creeping up on them and felt a little let down to see the way was clear. Which was insane. Strange enough to see such a creature under any circumstances, never mind smack in the middle of town. But she wanted to see it again; how was that for nuts?

I probably need a nap.

The girl hauled on her hand again and hooked left

and then led her down a short alley, to where a small huddled form was curled into a blanket.

“See?” the girl asked, clamping down hard on Lila’s fingers in her excitement.

“Isn’t this a school night?” But she bent over the small figure, blinked as her brain tried to process the image, gently touched it on the shoulder, then pinched her own leg

and looked up at the kids. “All right, first, that’s not a kid, it’s a bear cub for some reason. Second, I’m not a vet. Most important, I’m not an EMT, either.”

Instead of answering, the girl whacked the boy on the arm and hissed something that sounded like, “Unstable!”

“My high school guidance counselor would agree.” Lila bent back over the curled up mass of black, fluffy, whimpering fur that cowered away from her and glared with dark eyes. “I’m not sure what it is you think I can do.” She looked back up only to see the children’s expressions had transformed; they were actually edging away from her. “Why are you doing that? You guys lured me here. If anyone should be uneasy, it’s me. Shouldn’t you have picked my pocket by now?” She looked around the utterly deserted alley. For the first time, she realized she couldn’t hear anything: no bugs, no birds, nothing. And not much light from the lone streetlight. Downright creepy.

She checked the mouth of the alley for the wolf and was again disappointed to see nothing.

Lila sighed. She was in it the minute she’d stepped down from the vehicle that wasn’t an ambulance. “God damn it. Okay, so, just because I can’t help doesn’t mean someone else can’t.” She stood, only to see the children take several steps back. “Maybe call animal control?” She had to, she realized. You couldn’t just leave a random bear cub in a random alley after random kids flagged down a random adult.

But in the time it took her to fish out her phone and begin looking up Lilydale Animal Control—or would that be Saint Paul?—the children had (cue the dramatic music) vanished. Like the wolf, her patience, and her faith in the good people at Apartment Guide.

“Nice quiet neighborhood,” she muttered to the Realtor who wasn’t there. “Lots of families. It’s in the middle of a national park. Bargain.”

She’d been a Lilydale resident for fewer than eighteen hours and had no idea who to call. And after a day of unpacking, she was standing in an alley at 8:00 p.m. After hitting a wolf. The one thing she did know: she—they—couldn’t stay there indefinitely.

“You’d tell me if you were a metaphor, right, teeny tiny bear cub?”

She scooped it up, surprised by how light it was, given that it was the size of a small golden retriever

(it must be mostly fur, the way birds are mostly feathers)

then checked for the wolf one more time, and headed back to her nonbulance.

‹ Hoopla by Liz Crowe › An Unexpected Earl by Anna Harrington