Wulf, Tales of the Chosen by Kayelle Allen 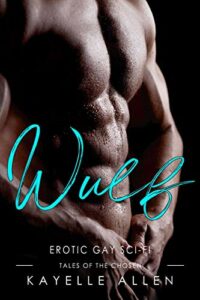 With his career threatened and his life at risk…

Wulf must seek help from the man responsible for the death of Wulf’s father. Luc Saint-Cyr, a.k.a. the Harbinger. An enigmatic man whose legendary power makes him the most feared person in the empire, and the one person Wulf swore he would never trust again.

For the Harbinger, saving Wulf is a simple matter of asserting his will. Luc’s ties to the Thieves’ Guild grant him access anywhere. He can shield Wulf without difficulty.

Until Luc brings Wulf home for safekeeping, and discovers the real reason for the threats. Protecting Wulf has not only put his and Wulf’s lives at risk, it’s also risked the life of Luc’s teenaged son.

Now, this is beyond protection.

To the Harbinger, this is personal…