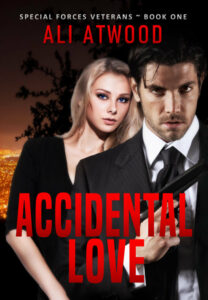 Accidental Love is a romantic thriller, with no cliffhangers and a HEA ending
The book includes steamy love scenes intended for a mature audience.

Delaney Cole has no interest in love and marriage, at this time. She’s a computer whiz, aiming to become a force in Silicon Valley. To pay the bills, she teaches computer science at the local high school. When a fellow teacher is murdered, Delaney finds herself the focus of a psychopath’s fantasies.

Enter Jake Torrance, Special Forces veteran, now a homicide detective with the Boston PD. Jake’s commitment to his work was a factor in the breakdown of his marriage. The follow-on slugfest divorce was a life lesson he won’t soon forget.

While the murder investigation unfolds, and the killer circles closer, Jake and Delaney dance around their unexpected attraction to each other. The charismatic detective fits the image of Delaney’s fantasy lover to a T, but he’s arrived too early and at the worst possible time.

Jake struggles to stay professional, but Delaney stirs emotions he thought he could no longer feel. He starts to believe she might be his second chance at happiness—if he can keep her alive.