All Hell by Katy Hunter 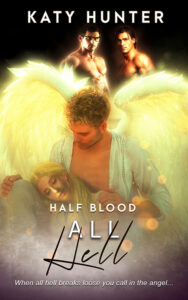 Book 3 in the Half Blood series

When all hell breaks loose, you call in the angel…

Cal, Travis, Max and new-guy Suriel are on the case. The paranormal convention is in town, and they are the star attraction.

Plus, there’s the little issue of Cal’s evil nemesis trying to take over the depths of Hell, one demon at a time.

Can Cal find harmony in her harem while once again saving the world?

It’s going to be a devil of a job…

The future had been on my mind recently. Right now, for example, unbeknownst to me, imminent death was what fate had planned—and not for the first time today.

“Just tell us where you hid the damn gold.”

I slammed my hands down onto the rickety old wooden desk and peered into his devious little green eyes.

“Fuck you. And fuck your boyband, too,” cackled the little green asshole. “I’ll see you in Hell.”

“Not if I see you f—” The spray hit me in the back of my mouth as I shouted my reply. At first it tickled, almost like a feather or a fluttering butterfly, then bam, my throat seized up. I uttered a mumbled ‘crap’ and fell to the ground. Again.

Damn it. How many hidden poison sprays did one leprechaun have?

I imagine Suriel stepped in to do his magic, because before I knew it, I was staring into his piercing blue eyes as he loomed over me, his mouth on mine, his tongue removing the last of the poison…very, very slowly.

I peered over his curls to see two very pissed off boyfriends. This was the second time that Suriel had needed to give me the literal kiss of life today, and they were not amused. Not least because, as they probably suspected—something I knew to be true—that no tongues or even bodily contact was needed for him to do his thing. A click of his fingers and I would be back in the world of the living. Such was the strength of this devilishly cheeky angel.

“Suriel…” I said into his mouth, making him jump away. “I think I’m good, thank you.” I sat up and looked at Connor, the aforementioned leprechaun. Time to get back to work.

“I’ll take it from here,” said Travis, my delicious demon and crime-solving partner. He rolled up his sleeves and revealed his very impressive biceps. The man only had to look at a bench-press for them to grow another inch wider, much to Max’s chagrin.

My lady parts did a little flutter of admiration. Those deliciously ginormous arms. Sigh. I don’t know if it was due to the life-threatening situations we’d been through over the last couple of years or the fact that we were all going through some stuff at the moment, but I was in love with my boyfriends, like deeply, deeply in love with them.

I couldn’t be in a room alone with any one of them without wanting to just rip their clothes off and ravage them then and there. But this wasn’t the time or the place, and damn it, we really needed to find that gold.

“I’m fine,” I replied, trying to stand up then falling down when everything went a bit pear-shaped.

“Clearly not,” said Max. He helped me to my feet, stuck an arm around my waist and escorted me, rather brusquely, from our makeshift interrogation room. “Travis will get it out of him. He always does.”

I peered over my shoulder to see Travis holding Connor up by the tip of his beard. Maybe Max had a point.

I turned to Max and grinned at him suggestively.

“Really, Cal? You just died…twice. You’re not even a little tired?”

I shook my head and played with the buttons on his shirt. “Is it my fault that I’m in love with the most handsome warlock on the planet? No. It’s your fault for existing.”

He rolled his eyes and feigned exhaustion. “It’s possible to have too much of a good thing, you know?” Then he opened a door, checked to see what was in the room then whisked us both in, throwing me up against the wall and slamming the door behind us. “A quickie—and I’m in charge,” he said before gripping my hair, yanking my head back and smacking his lips onto mine. Oh, bless him. As if he were ever going to be in charge.

He pulled away and snarled a little in delight. His eyes darkened and a sparkle of magic twinkled in them as my G-string tightened around my pussy before slowly gliding down my inner thigh and dropping to my ankles.

He spun me around, pinning me just a little too hard against the cold brick wall. Unzipping himself, he pushed his cock between my butt cheeks and thrust it against my pussy.

He slid his fingers up my back, glided them around my body and grabbed onto my nipples, pulling and flicking them until they hardened to his touch.

We knew each other’s turn-ons, each other’s erogenous zones, completely. I didn’t think I could love this man more.

He sank his lips down onto my neck and bit me, making my head jerk up. Max and I had been playing with pain for a while, pushing each other, going a little too far. My endless desire for him gave us all the time in the world to experiment. Our carnal knowledge of each other expanded with every slap-filled, nibble-induced orgasm.

He traced his fingers slowly up to my wrists then lifted my hands above my head and thrust himself inside me. There was never a need for fussing with condoms and lube when Max was around. He’d worked out how to magically cover his ass—or his dick, in this case—a long time ago. Nobody was getting pregnant on his watch.

I gasped as he plunged into me harder and harder, pummeling into me. There might not be anybody in this room, but someone walking down this corridor would have no doubts as to what was going on in here. I was most definitely getting the banging I’d desired.

He got off on PDA, but I preferred to keep it in the bedroom. My father—as my mother loves to remind me—was a bit of a prude. Mum, on the other hand, coming from a magical family, had no such qualms. Sex, when you’re a witch or a warlock, involves no shame, no judgment. I like to think I inherited a bit of both worlds.

Max let out a gasp. I recognized what it meant. It was his ‘I’m about to come’ sound.

He knew damn well that I needed clitoral stimulation. It wasn’t our first rodeo. He hadn’t even grazed my clit, and this was going way too fast for my liking.

So much for being in sync sexually.

He giggled in my ear. “First she wants to be fucked. Now she wants to come, too?” He slowed his rhythm but didn’t make any move toward my clit. “And what if I don’t want to make you come?”

I twisted my hands around, grabbed his wrists, thrust back my hips hard enough to make him withdraw, swung myself around and threw him onto the floor with me sitting astride him. “I don’t come, you don’t come,” I said as I sank down onto his dick.

He laughed and pulled his wrists from my grip, putting his hands behind his head and enjoying the ride. “I thought you said I could be in charge.”

“I said no such thing,” I replied as I twirled my pussy against the very base of his cock, rubbing my clit against him and bringing myself to fruition all by myself.

I slowed down as the waves of pleasure coursed through my body, and he sped up underneath me, bouncing me up and down, groaning with pleasure as he brought himself to conclusion.

I flopped down onto him as he lay prostrate on the dusty floor. “Are we fucking or fighting? I can’t quite tell.”

“Both? Neither?” His smile waned. “If you’d just let me dominate you, I wouldn’t have to seek it elsewhere.”

“And where would the fun be in that?” I sat back on my knees and heaved myself up, searching for my underwear. I turned to look down at him. “You’re happy, right? You’d tell me if something was wrong?” He liked our little power struggle, didn’t he? Wasn’t that what it was all about? It had always been like that. Sometimes I held the whip, sometimes he brought out the nipple clamps. He got his need for submissives elsewhere, and that had always been the case. It was what he did—what he’d always done.

“It’s nothing. I’m being silly. Don’t listen to me,” he said, with a touch of remorse. I gave him a hand and pulled him to his feet. He leaned down and kissed me on the nose. “I love you. I’m sorry. It was great, and I ruined it.”

Before it was too late.

Before I’d almost lost him for good.

Katy Hunter lives on a mountain in France with her husband, kids and two dogs.

When she’s not writing you can find her curled up in front of the fire, book in one hand and a glass of chardonnay in the other.

‹ The Seven Husbands of Evelyn Hugo by Alma Cuervo › Arrested by Love by Kathryn R. Blake