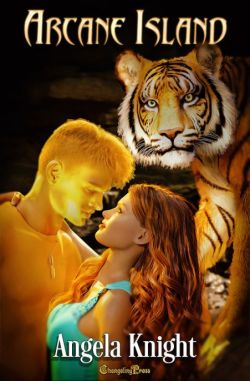 Dave Frost died in combat five years ago, but his soul survives, magically bonded to the body of his partner — a six-hundred pound tiger. Dave can conjure a human manifestation, but nobody treats him as a man anymore. Especially not women. Until he meets Ariel — his costar — while shooting a reality TV competition in the Bahamas. The show’s producers have assigned him to the beautiful witch for an onscreen showmance.

Ariel Piper’s talent is strong enough to turn the competition in their favor. Unfortunately, she also has a condition that makes using her magic agonizing. When they discover Dave’s touch kills the pain, he’s driven to help.

Their showmance soon becomes the real thing, though Dave fears she’ll dump him when the show wraps. Can Ariel convince this heroic, wounded man to trust her love — before the show comes to a lethal climax that’s not in the script?

Buy it this week!