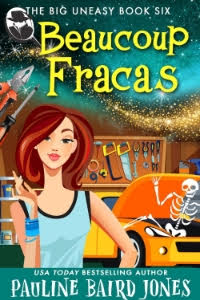 She doesn’t want to be there. He doesn’t either.

Private investigator, Gideon Baker, is on the trail of a missing husband. A tip about the man’s car sends him to the Savoie Salvage yard, but the owner is dead and his daughter, Jessica, is trying to sort out the mess her father left behind.

Jessica would rather be anywhere than sorting out the debris left behind by the father she never even met. His salvage—aka junkyard is giving her daddy issues and heat rash.

Gideon and Jessica strike sparks—both kinds—as they find themselves following a trail of murder, betrayal, and junk cars.