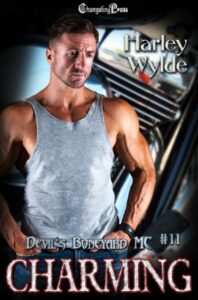 Dakota — Having a half-brother who’s an infamous assassin isn’t all it’s cracked up to be. At twenty-five, he’s still micromanaging my life. The moment Specter tells me about an arranged marriage to one of his associates I do what any sane woman would… I run. Never counted on meeting a biker I can’t seem to forget, nor did I plan on our two days together to have lasting consequences. When bad men find me, there’s only one person I want. Charming. I’m not just not certain I’ll get a warm reception.

Charming — Dakota is different from anyone I’ve ever known, and it’s not because of who her brother is. It’s simply her. Some sixth sense keeps telling me she’s in trouble. When she calls and asks for help, I know I’ll do anything for her. The men after her have no idea she’s mine, or that she’s carrying my kid, but they will soon enough. I won’t rest until they’re six feet under.

WARNING: Charming is part of the Devil’s Boneyard MC series and can be read as a stand-alone. There’s a guaranteed happily-ever-after, no cliffhanger, and no cheating. This is an age-gap romance of more than twenty years with bad language, adult situations, and violence.