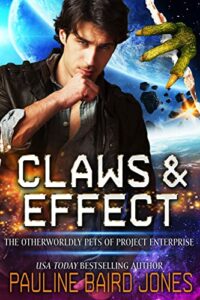 What’s in the collection?

In Time Trap, Sergeant Briggs’s world collides with the very unusual Madison and her pet parrot. With a Time Service Interdiction Force on their heels, can the three craft a plan that will save a base full of geniuses and technology and get them the happy ending they deserve?

Operation Ark’s Caro, her caticorn, and Kraye are tasked with returning some unusual aliens to their home planets. Together they must face a dangerous journey, a lethal enemy with a score to settle, their unexpected desire, and an uncertain future if they make it out alive.

Cyborg’s Revenge asks the question, can the shy guy and the lovesick gal defeat their greatest enemy and find a happy ending? Only the chatty Snake knows for sure.

General’s Holiday brings us a lady with a crazy story and a frog for a side-kick. And then there is the general who has been waiting for his Picard moment for a long time. Be careful what you ask for! But…if he can survive he might just get to kiss the lady.

And in the bonus short story, “The Real Dragon,” Emma Standish didn’t think her day could get any worse. Her dad is marrying his boss, her dragon suddenly came back talking and typing, and it’s her fault the Earth, or at least ten square miles of Texas, is going to be destroyed.

Dive into four Project Enterprise stories and one quirky Earth-based romp! All five originally appeared in the ®Pets in Space anthologies.