Come For You by Willa Okati 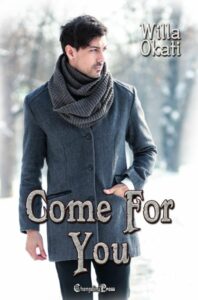 Gabriel, a dreamer and a librarian, is so shy and introverted that he’s still a virgin Omega at twenty-five — but he can’t help wishing fairy-tale Prince Charmings were real and that one would find him. One does, a rough-hewn but outgoing, captivating quarryman Alpha called Wynn. For them, it’s love at first sight. Gabriel doesn’t care if they’re an odd couple, no matter what others and his Beta co-librarian Cameron thinks about it.

But the happy ending is harder to come by. When Gabriel’s almost full term with their first child, there’s an accidental explosion at the quarry that leaves Wynn trapped behind a wall of rubble. Waiting for news – any news – and hoping against hope, all Gabriel has to comfort himself with is the memory of his fairytale of a love story. He’s so lost in dreaming he doesn’t realize he’s in labor and needs to get to a doctor.

Who will rescue who?